I once worked on a pipeline barge as a welder helper. I was in pretty good shape and I stayed that way by exercising regularly. I would do push-ups - standard and inverted (with my feet up on the wall). On land, push-ups are one thing - on the Gulf of Mexico, they're something else. Pushing up as the barge rode down the slope of a wave, I would almost lift off the floor, but if I wasn't ready when the barge was lifted by the next wave, I could find my face in a collision with the floor.


Something was changing as the barge bobbed around in the water. Was it my weight? Was it my mass? Does it make a difference?


I have an assortment of tools for measuring weight and mass. Here's a picture of some of it. 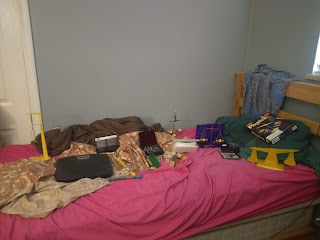 
There are some weight (or mass) sets in the center. (I apologize but the vocabulary of weight and mass is incurably tangled.) To the left are some tools to measure weight - I'll call those "scales", although the word is also used for things that measure mass. To the right are tools to measure mass - I'll call those "balances" although that word is also used to refer to weight measuring devices.


You might say I have a problem, here. Let's look at the three groups separately. 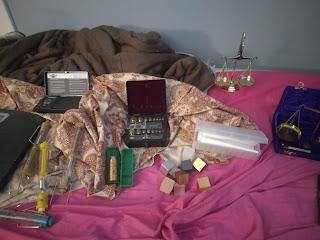 
There are standards of both weight and mass and I have lots of little pieces of metal and other materials that have been created to conform to those standards. For instance, the open black box in the center contains very precise (I had to buy it for lab work when I was in pharmacy school) pieces of metal with gram masses and ounce weights.


The cubes below it are called "density samples" because, despite the fact that they're the same size, they have very different masses. Density is defined as mass per unit volume.


There's also a stack of brass masses on a hook that are just right for hanging. 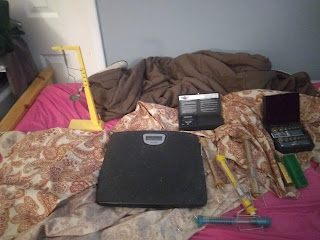 
You've likely seen many scales. The things you use to measure the weight of produce at a grocery store are scales. You also weigh yourself on scales - bathroom scales.


Usually, a scale measures how hard an object pulls on a spring (like the set of spring scales on the lower right, or the Jolly Balance (which is actually a scale), the yellow plastic thing in the upper right corner - it also measures density. Alternately, a scale might measure how hard an object pushes down on an electronic component, like the digital bathroom scales in the picture. 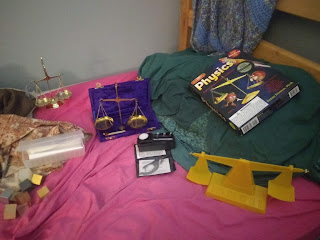 
On the other hand, a balance literally balances two objects. If they balance evenly, they are pulling down with equal force. Many science kits include inexpensive balances.


The blue velvet lined box in the picture contains a brass assayer's balance like the ones used long ago to "weigh" gold nuggets. There is also a pocket postal scale (which is actually a balance) and a tiny, three beam balance. It works like the "scales" your doctor uses to weigh you. In that case, the doctor balances you against the slider weights on the bars that are about eye height in front of you. A system of levers magnify the weights of the sliders and the machine calculates your weight when you're balanced.


I carried some equipment to the Ross-University Hills branch of the Denver Public Library and rode their elevator to see what would happen when I measured the weight and mass of objects.


[Riding an elevator with a scale]


First, I used a portable electronic scale to weigh a mass. Yeah, I know it's a 20 gram mass that the scale says is 30 grams - I didn't zero the scale, but you can tell that the indicated weight (actually weight translated into grams - more about that below) changes as the elevator goes up and then returns to the first floor.


[Riding an elevator with a balance]


On the other hand, the balance stays balanced. You can tell because the vertical point stays vertical. Why did the weight change but the mass did not?


Mass is simply the amount of matter in an object and that doesn't change as long as the object is intact. The mass of an object is measured by comparing it to another object of known mass.


Weight is actually the force that an object directs straight down vertically. Newton's second law of mechanics, and the one most central to everything, defined force as mass times acceleration, so I need to go over a few technicalities.


When a thing changes position, it moves at a particular speed. In a car, speed is usually measured by a speedometer in miles per hour (at least in America. Everywhere else, it's kilometers per hour.) Speed is measured in distance per time, or distance divided by time.


Physicist do not usually work with speed. They prefer to work with velocity. Velocity is speed in a specified direction. It's called a vector quantity because you have to give more than one measure to fully specify it.


Now we come to force. When I say that force is mass times acceleration, think in terms of pushing an object so that it speeds up faster and faster at a constant rate. Force makes things go faster or slows them down. A common measure of force is the newton which is the amount of push required to accelerate a one kilogram object one meter per second squared.


And weight, being a force, is often measured in newtons (notice that, when "Newton" is a name, it's capitalized, but when it's a unit of force, it's written in lower case.). Weight is mass times acceleration. What acceleration? The acceleration of gravity. That's why the weight of a body can change. The acceleration that gravity imposed on a body in freefall is 9.764 meters per seconds squared...at sea level on the Earth and, although it is different at different places on the Earth's surface, the variance is usually too small to worry about. (Geologists actually do worry about it because large deposits of metal ore will present a slightly different gravitational pull than other rocks and they use of a very sensitive instrument called. "gravitometer" to measure the pull.) As you move out away from the Earth, though, it's pull becomes weaker and your weight also decreases.


I recorded my phone's accelerometer on the elevator using Google's Science Journal. It looked like this. 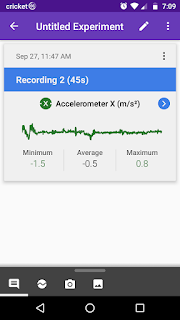 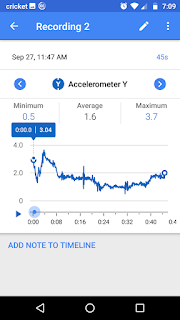 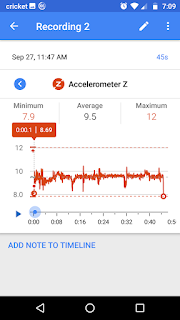 
Another digression...it can be confusing which direction is which on a phone. Just remember the graphs you drew in algebra. The x axis went left to right, the y axis went up and down and if you were working with three dimensions, the z axis was into and out of the page. It's the same for the phone. Holding the phone flat in front of me, the direction of the elevator's motion was along the z axis. All of the accelerometers produced jagged lines, but look at the scales. The x and y accelerometers showed accelerations around zero and one m/s2. The z accelerometer measured around 9.5 m/s2. That should look familiar - it's the acceleration due to gravity.


That's actually how the phone's accelerometers work. They are tiny (You might have heard of nanotechnology. Cell phone accelerometers are nanotech.) combs that have tiny weights at the end of their times. As the weights accelerate, they move with the acceleration and sensors pick up the motion.


It's not entirely bogus that my electronic scales claim to measure grams (mass). It actually measures weight but, on Earth, weight is mass times a constant 9.764 acceleration due to gravity so the electronics just have to divide the weight by 9.774 to get the mass….but not on the moon.


Riding in a car, notice how you lean as it slows down, speeds up, or turns a corner. That's forces at work. If you have an elevator handy, you might try riding it with a bathroom scales and see how your weight changes and remember...your mass stays the same.
Posted by Wolf VanZandt at 7:22 PM