Something there is that doesn’t love a wall,
That sends the frozen-ground-swell under it,
And spills the upper boulders in the sun;
And makes gaps even two can pass abreast.
The work of hunters is another thing:
I have come after them and made repair
Where they have left not one stone on a stone,
But they would have the rabbit out of hiding,
To please the yelping dogs.  The gaps I mean,
No one has seen them made or heard them made,
But at spring mending-time we find them there.
I let my neighbor know beyond the hill;
And on a day we meet to walk the line
And set the wall between us once again.
We keep the wall between us as we go.
To each the boulders that have fallen to each.
And some are loaves and some so nearly balls
We have to use a spell to make them balance:
‘Stay where you are until our backs are turned!'
We wear our fingers rough with handling them.
Oh, just another kind of outdoor game,
One on a side.  It comes to little more:
There where it is we do not need the wall:
He is all pine and I am apple orchard.
My apple trees will never get across
And eat the cones under his pines, I tell him.
He only says, ‘Good fences make good neighbors.'
Spring is the mischief in me, and I wonder
If I could put a notion in his head:
'Why do they make good neighbors?  Isn’t it
Where there are cows?  But here there are no cows.
Before I built a wall I’d ask to know
What I was walling in or walling out,
And to whom I was like to give offense.
Something there is that doesn’t love a wall,
That wants it down.'  I could say ‘Elves’ to him,
But it’s not elves exactly, and I’d rather
He said it for himself.  I see him there
Bringing a stone grasped firmly by the top
In each hand, like an old-stone savage armed.
He moves in darkness as it seems to me,
Not of woods only and the shade of trees.
He will not go behind his father’s saying,
And he likes having thought of it so well
He says again, ‘Good fences make good neighbors.'

I always imagine Robert Frost with an ironic twinkle in his eyes. In The Road Less Taken, most people read ,"Go ahead! Be adventurous! Take the road less taken!" I, on the other hand, get the sense that, after taking the road less taken, he wondered, "And what did I miss? Who did I miss?"

People are important. I like trails during the workweek because they are less crowded, but I still like the community of people that are there.

Over time, we have distanced ourselves from our neighbors, and I see that as a social ill, not a freedom. I don't feel comfortable being independent to the point of isolation. Even 50 years ago we realized that real security was a cooperative venture with our neighbors. After church on Sunday (and several other times during the week), we would "visit" friends - sit on the porch and sip coffee - talk politics and business.

When did we begin building fences? I don't know. Probably before the first cities. I don't think that fences isolate, that is, keep other out, nearly as much as they differentiate. A person who comes through our gate is acceptable (or, at least, appears at first to be acceptable. There are those tricksey folks.) The person who climbs over our fence is an intruder.

Look at the pictures of Four Mile House, the oldest standing structure in Denver, actually a little older than Denver.

Fencing material is an indicator of socioeconomic standing. Wood is not expensive. Pioneers could get wood from surrounding trees. Board wood was a little harder to fashion, but the common split rail fences of old only required a good hand with an axe.

In contrast, look at the cut stone around the Brown's summer home in what is today Bear Valley in Lakewood, Colorado. It was country in 1897 when it was built. James and Molly Brown were wealthy and could afford the stone and stone workers. 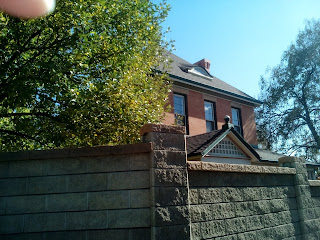 Stone walls are not terribly uncommon in some places, like New England. Stone is rather plentiful there, and many of the stone borders of properties are stacks of rounded boulders coughed up by ancient glaciers. Robert Frost's poem vividly portrays how people maintain these stone walls. There's something self-validating about picking up a 20 pound, weather/water/ice rounded stone like a basketball and setting it in it's place on a mound.

When I was a child, people who had fences usually had inexpensive chain link fences. 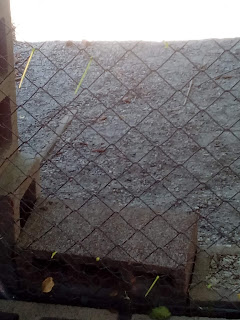 Most did not have fences between them and their neighbors.

In my neighborhood, everyone has fences. The most common fences are around back yards, but some yards are completely fenced. We have a large, wooden-slat fence around most of our backyards, but some is chain link. 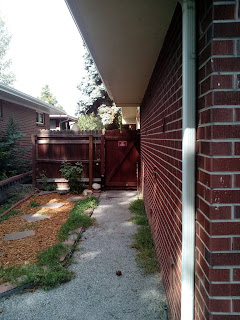 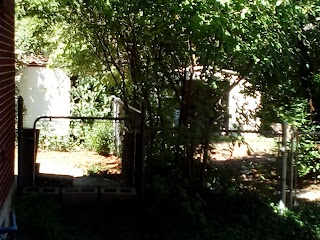 The "Beware of Dog" sign is from an earlier tenant. We do have a dog, but intruders should really be much more concerned about the two-legged occupants. Did you know that there were "Beware of Dog" warning found in the ancient remains of Pompeii?

Here is the wall around the gated community across the street. I wonder if the steel fenced gaps in the stone wall are attempts to make the wall seem less an imprisonment. 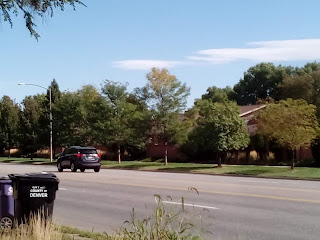 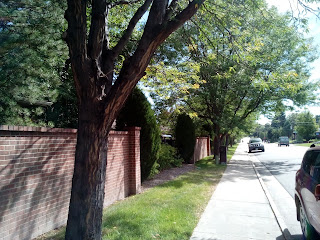 Here are some more pictures of fences taken on a recent walk to the library. 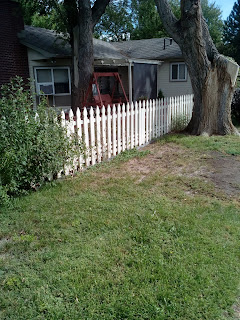 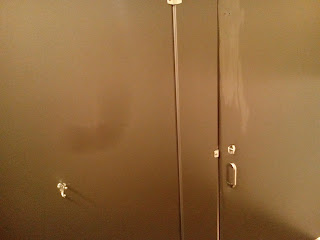 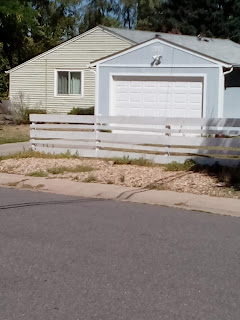 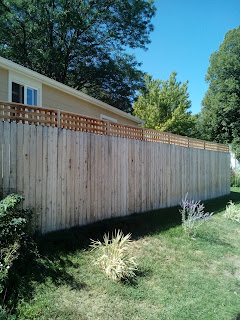 And a few other fences in my area. 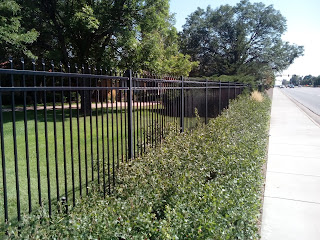 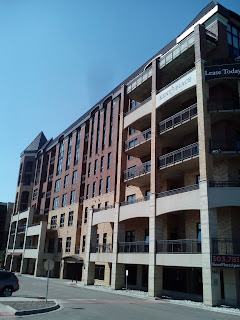 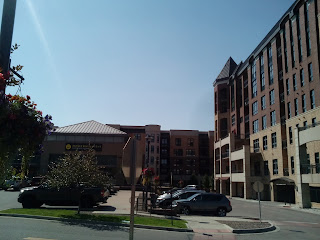 [Kent Place Apartments...I'm sure these fences aren't to keep people out.] 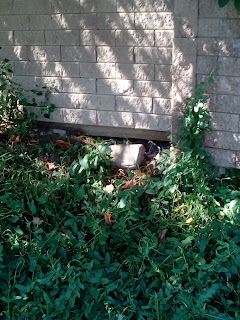 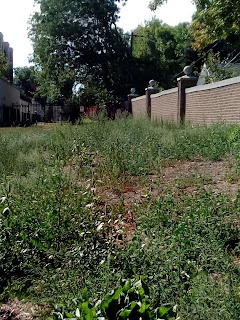 Fences are material structures, but they are also psychological and social.

I wonder if Robert Frost, perhaps, sees in his brutish neighbor a reason that good fences make good neighbors. Frost seems to me to be a fence straddler on many issues - to good effect.

Do you have a fence? What is its  purpose?

Take a walk around your neighborhood, or around an area of a  town you are visiting, and notice the fences, walls, and gates there. Are they different from what you're used to? How are they different and what do the differences mean?

There's an art to fences, walls, and gates. Even chain link fences have structures that are intended to be attractive. What do you think about the appearance of fences you see?

Posted by Wolf VanZandt at 2:13 PM