If you look at a current map of Denver, you can see the original town. Check it out. 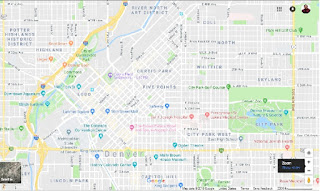 Do you see how the pattern of streets change? Between interstate highways 25 and 70, the streets run diagonally to the map but in other areas they run north-south and east-west.

Towns are established where they are for different reasons. For instance, Tombstone, Arizona was a silver mining town. Look at a map of Tombstone and see if you can see the peculiarity.

No water! There are no streams running through it. Towns tend to develop where there are resources. Many Native American villages were mobile and followed game, or weather. Food is important but by far, water is the most important. Most large cities were founded on oceans or rivers. Denver is no exception.

Gold drew people to the Denver area and the original settlers set up around the South Platte River and Bear Creek, but it turned out that Denver's gold was only a rumor. Montana City, on the South Platte near Big Dry Creek was a bust, but the settlers didn't give up. They moved their cabins up river to where Cherry Creek ran into the river and set up a permanent settlement. They called it Auraria - they evidently still had gold on their minds. You can see the Auraria Parkway on the above map where the two interstates come together.

I'll be hiking from Auraria station to Osage station in November.

Notice, on the map, how the streets run along the river. The river was the important thing in early Denver around 1860. The railroad was yet to come.

You can find Cheesman Park, a green spot on the mouth a little southeast of downtown Denver. That was the city's "boot hill" - the cemetery. It was outside the city proper. Now it's a major park well inside the heart of Denver. Notice how the streets in this part of town run vertically and horizontally. Many modern cities follow this kind of grid pattern and Denver quickly became a modern city.

Here are a couple of old maps from the 1860s of the area around Denver, and Denver City (that's what it was called before it became the territorial capitol. Can you see where old Denver fits into new Denver? 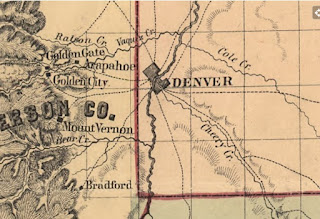 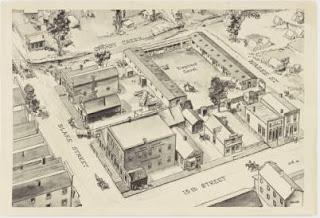 Denver's oldest standing structure is, well, four miles southeast from where old Denver was. Four Mile House, on Cherry Creek, is a white clapboard and brick home built in 1859 as a way house for travelers on the Cherokee Trail, a major overland trail to the gold fields in Oregon and California that was established in 1849. Here is a picture and some links to information about the Four Mile Historic Park. 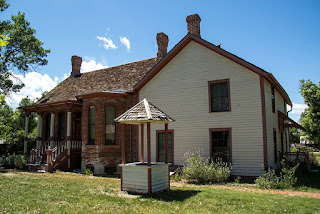 Use Google to look at some maps of major cities of the world. Do they seem to have been established on streams? Do you think the streams were navigable to the ocean? What about your town? Why is it where it is?

Are there any surviving buildings from your towns founding? What material was used in their construction? What "style" are they?

You can often learn a lot about the early history of towns from local cemeteries. Are there any old cemeteries in your town? Where was it built in relation to the town? What are the earliest dates on tombstones there? Were any of the first settlers buried there?