The hike from Evans station to Broadway station is short but there are some interesting highlights along the way. Pasquinel's Landing and Overland Park takes up the length of the Mary Carter Greenway between Evans and Mississippi Avenues along the South Platte River. On the other side of Platte River Drive is Ruby Hill park.

The light rail station at Evans is a short walk along an overpass over Sante Fe Boulevard. As an example of how Denver has ornamented its public places, here is some of the art on the overpass.  Denver has encouraged the public expression of art in murals and sculptures. 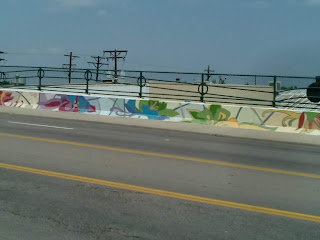 Pasquinel's Landing is directly across Evans Boulevard from Grant Frontier Park and begins with a fitness park with a set of exercise equipment. I investigated them but didn't use them. I still had Ruby Hill to deal with. Still, with the trail itself, they looked like a pretty complete workout.

Fitness parks seem to be a feature of our landscape now. The Rails-to-Trails trail in Valley had one as did the park near the stadium in Selma and I knew of several other city parks in Alabama with exercise stations. 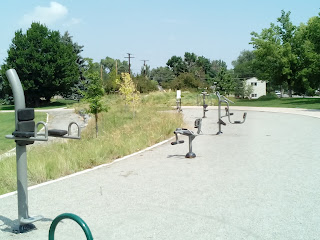 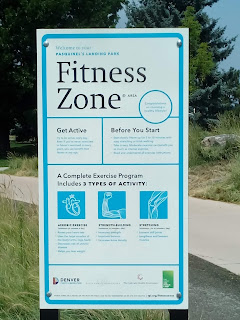 This is also a boat landing for people who want to canoe or kayak on the river, and the water birds seem to like this area. I saw these herons and also a snowy egret (I couldn't get a good picture of the egret because it kept its back to me.) 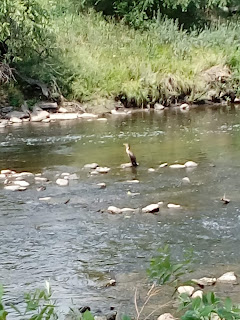 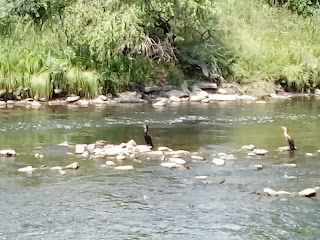 Along the river, the area has been planted to provide examples of ecosystems in the Denver area from the southern hills to the alpine regions above 900 feet in the Rockies. Plaques along the trail offer a self guided tour.

The land to the west of the river is hilly and a couple of the hills really stand out. The panorama for this blog was taken from Loretto Heights and is one of the best views of the area around. Ruby Hill is also a popular prominence, especially in the winter when it provides gentle, clear slopes for snow sledding. The lawn is kept well maintained but the slopes at the bottom near the river are allowed to grow in a more natural state.  The several varieties of trees provide nesting for raptors like eagles and hawks.

A trail circles the hill to the top and back to the base where Florida Avenue crosses Platte River Drive. Denver has themes. Further South, the streets are named for colleges. Here, they are names for states. To the north, in Denver proper, they start getting numbers. 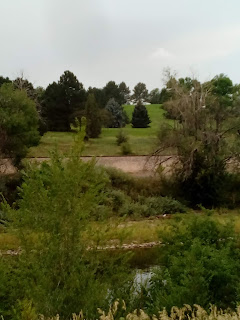 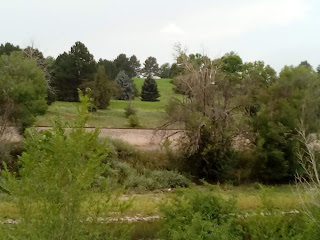 The crown of Ruby Hill offers good views east across the plains, and the tall buildings in downtown Denver. 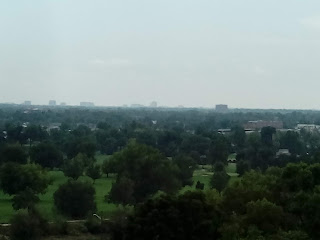 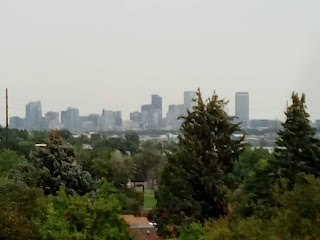 There is also a large pavilion on top with picnic tables and a modernistic Stonehenge type sundial. This day was not sunny, so I didn't get a picture of it working, but you can get an idea of how it works from these pictures. When I start writing blogs about astronomy in a couple of years, I'll have to revisit the many sundials in the area. 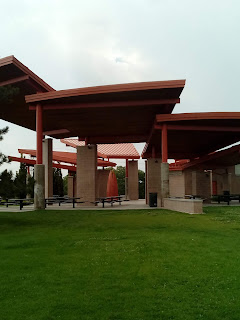 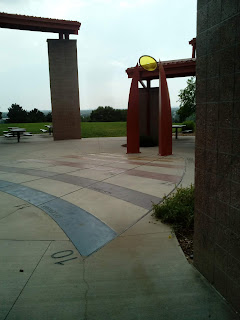 Sanderson Gulch is the northernmost point that I've hiked on the South Platte River to date. Like Harvard Gulch, it is a man made canal created to drain storm waters off the slopes of the river valley. It runs about five miles from Lakewood, through North Harvey Park, to the Platte River at Ruby Hill. This is where it empties into the river. 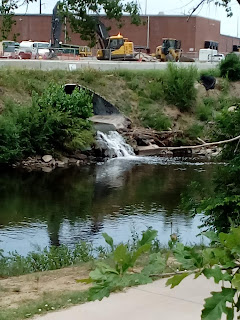 This time, I continued a little further to Mississippi Boulevard. Here is a view of downtown Denver from the bridge over the river. I'm getting close. 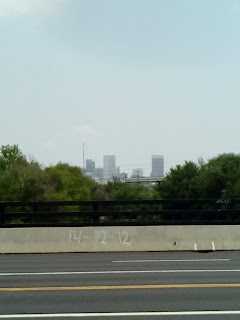 I grabbed a bite at the Breakfast King on Mississippi before continuing to Broadway Station. Until recently, I've associated the colors of the apartments in this picture as "Denver colors", but I've learned that they are the colors of a major construction company in Denver that builds apartments around light rail stations. It seems a lot of people don't like the colors. I don't mind them - they sorta look autumnal. 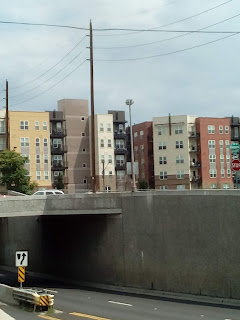 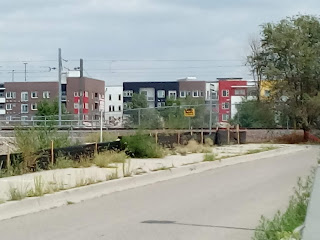 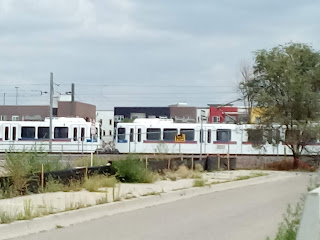 Broadway station is a hub for several of the lines on the RTD system. The train overhead lines and the rails create interesting patterns where the different lines come together.

Power is delivered to the RTD trains through structures that sweep these overhead power lines. Other systems use third rails to deliver power. The motors on these trains are 620 horsepower electric engines that run on 25,000 volts of alternating current. They can reach speeds up to 79 miles per hour. 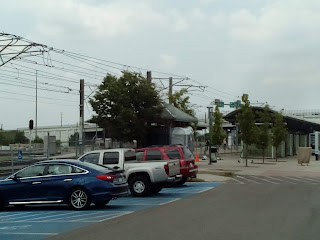 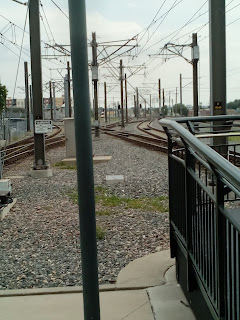 From Broadway, I take the train to University station, and the bus from there back home. The summer is still on us but the overcast skies kept the temperature somewhat less than brutal.

Denver is all about art. Most of the railway stations are decorative and many areas sport murals, sculptures, outdoor art exhibits and art museums. What kind of art is on display in your area? Does your town support local artists?

Denver is on several migration routes for birds. Also, raptors seem to like the area. It's a popular place for bird watchers. Most areas in the US have interesting features for bird watchers. Even New York city and many other large towns have their falcons. What kind of bird populations are in your area?

Do you have a light rail system in your area? In addition to being a fun means of transportation, they are interesting engineering achievements in their own right.