Damascus was established in the third millennium BC. Rome, in 753 BC. Paris was established by the Romans as a military camp in 52 BC. Alfred the Great founded London in 886. It had been settled off and on earlier, but this is the London that grew into the modern city in the United Kingdom.

Denver, Colorado was founded in 1858. That was three years before the beginning of the American Civil War. Actually, Montana City was settled in 1858 where Grant Pioneer Park now stands on the Platte River. It was soon abandoned in favor of Auraria, a little further north. As the name suggests, the draw was gold. Gold wasn't found there. The McBroom brothers, John and Isaac, settled the area around Bear Creek near the confluence with the South Platte around 1859. A Swedish immigrant, Peter Magnes, also founded a small settlement, Petersburg, near the confluence of Bear Creek and the South Platte in 1865. Petersburg later became Sheridan, Colorado. There are plaques along Bear Creek and the South Platte commemorating the McBrooms and Petersburg.

By the way, the McBrooms bare no relation to Broomfield, Colorado, which was probably named for broomcorn grown in the area, an early source of revenue.

All this to demonstrate that, in terms of American cities, Denver is an adolescent. In terms of world cities, it is an infant. Still, in its short time, it has grown from three rows of cabins in 1858 to 4,749 in 1860 to over 700,000 people. It is currently the 19th largest city in the United States. By decade the growth chart looks like this: 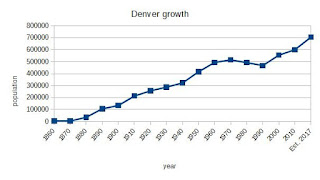 Denver really took off in the 1870s when the population jumped from 4,759 to 35,629 and 1890s when it reached 106,713 people. Denver City became the territorial capital of the Colorado Territory on February 28, 1861 and, with a railroad to the first transcontinental railroad, which passed through Cheyenne, Wyoming, a major supply hub.

For more about early Denver, check out Pride of Place: Denver c. 1860.

Why is your home town where it is? When was it founded and how quickly did it grow? Is it still growing?