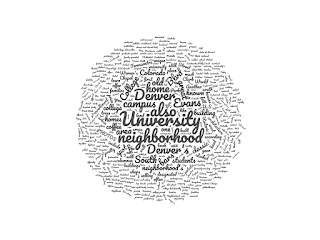 
I've lived at my present location for about three years and it's just recently occurred to me to do a walking tour of my neighborhood. In this case, that would be the University neighborhood in Denver, Colorado.


The University neighborhood is named for the University of Denver, which takes up roughly it's north third. The area is located on the Eastern rim of the South Platte River valley. Using Google Earth, I found that the intersection of University Boulevard and Bates Avenue is 100 feet above the river.


The boundaries of University neighborhood are University Blvd to the east, Dartsmouth Ave to the South, Downing Blvd to the west, and the Valley Highway (Interstate 25) to the north.


The place was once a town in it's own right, South Denver, and was established as a residential area and buffer zone for Denver proper. There's considerably more to University neighborhood than the University and you can read about it here:


The image at the head of this blog is called a "word cloud" or "tag cloud". It's a method of content analysis and is a visual representation of the frequency of words in a text….in this case, the Denver 9 news article referenced above. The bigger and more central a word, the more often it occurs in the text. Roughly, according to Denver 9 News, these are the things that are important to the University neighborhood.


The University takes center stage, but also notice the relative importance of homes, bars, and coffee. Sitting here, I can count four coffee bars in the neighborhood and there are several pastry shops and restaurants that explicitly advertise coffee. Coffee shops are interesting creatures, each having its own personality. Of my two favorites, La Belle Rosette is the quieter and usually plays lounge music - Sinatra and Dorsey - that sort of thing. Keith's, on Downing, is livelier and leans toward jazz and, occasionally, live music.


I started the walking tour at the bus stop at University and Bates. Just across the street (in the next neighborhood to the east) is the church I attend, the Christ Episcopal Church. There are many churches in the University neighborhood and as many denominations. Almost directly across from Christ Church is the Unity Spiritual Center, an interesting blend of Christianity and Eastern philosophy. 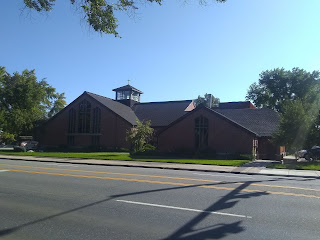 
A visitor might expect to have grand views of the Rockies from this neighborhood since it's on a high rise opposite the Front Range but they would be surprised. Most of the area is fairly dense Urban forest. What they would see are trees. Many of the trees have been planted by developers and residents. The way I visualize this area before the pioneers is like the town in High Plains Drifter. After all, Denver is high plains, cool desert. The climate is changing and, if it hasn't lost it's desert status yet, it's well on its way.


The best views of the mountains are on the east-west streets and on the University campus.


About the best authority on Denver neighborhoods is Chris Englert of Walk2Connect. She has toured every neighborhood in Denver, leads walking tours, and has published a couple of guide books about the Denver area. (https://www.google.com/url?sa=t&source=web&rct=j&url=https://eatwalklearn.com/about/&ved=2ahUKEwiC58Kyud3kAhWT_J4KHS0JBvgQFjADegQIBhAB&usg=AOvVaw3ZHjg0K4p9woClsee9cRBR&cshid=1568915491103). She included a walking tour of the University neighborhood in her "Walking Denver's Neighborhoods" but it focuses on the campus and about two thirds of the area is residential and well worth seeing for anyone who likes residential architecture and gardens.


I headed down University to Dartsmouth. The Korean Emmanuel Methodist Church is at this intersection.


With the large Asian population in Denver, there are several Buddhist and ethnic Christian churches.


The area between Dartsmouth and Downing Street is a residential area called Arapaho Acres. It's composed mainly of small homes but there's a lot of variety and many nice gardens. 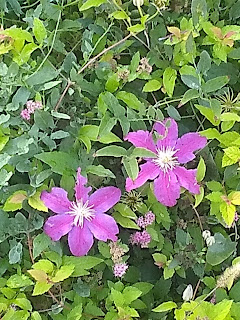 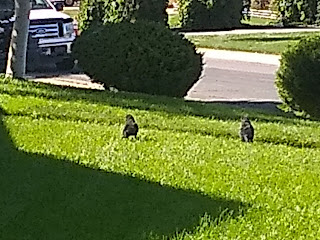 
The Porter Adventist Hospital is just up Downing. I've seen that they've had some legal and procedural problems in the past but I've used them several times and I've never seen a more professional, competent, friendly staff. I've been impressed every time. They call themselves a "community hospital" and that's exactly what it feels like.


Just past Porter, Harvard Gulch and it's associated trail crosses Downing, so I took it uphill. 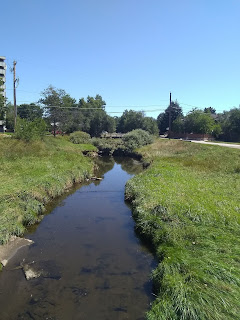 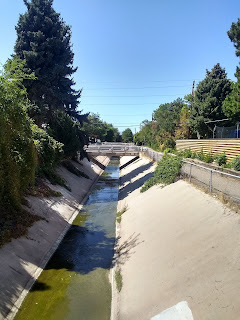 
This trip was also the maiden run of my new Motorola Moto E5 Cruise phone. I've packed it with all my essential equipment and my entire reference library so, since my computer crashed, I really am mobile. It's a great experience. I'm composing this blog on my phone. This was also the tryout for my AllTrails app. It provides tools to record hikes and walking tours and can upload the report to the AllTrails website. My recording told my that I walked 8 miles in 3 hours 48 minutes and 26 seconds. It also said that my total elevation gain was 223 feet. The elevation gain on this section of the Harvard Gulch Trail was 62 feet.


Harvard Gulch isn't a natural stream and it isn't what geologists and geographers are thinking when they say "Gulch". Technically, a Gulch is a steep V shaped valley. The several gulches in Denver are canals intended to drain runoff from the valley slopes into the South Platte River. Harvard Gulch East runs from Colorado Boulevard near Iliff to Rosedale, where it goes underground to emerge again at the river.


Near the Eastern border of University neighborhood, the trail passed through DeBoers Park, a nice greenspace with a playground, park benches and picnic tables, and a water fountain. 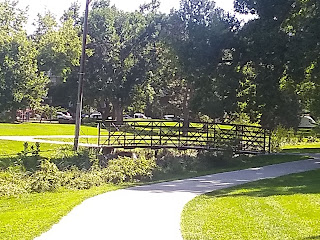 
From there, I walked to the University campus.


This campus is an excellent opportunity to see a wide variety of architectures and landscaping. The whole campus is an arboretum with plaques identifying trees. there are also several water gardens. Visitors should also check out the anthropology museum in Strum Hall and Vicki Myhren art gallery near Asbury Street.


The campus is featured in several of the other Adventuring blogs. Currently, there is a lot of construction.


When I have asked Denverites where to eat, the most common recommendations are for the area around Evans and University. There are many great restaurants, coffee shops, bakeries, Ben and Jerry's Ice Cream shop, and even Deiter's Chocolate.


At Buchtel Avenue is the Ritchie Center with it's golden carillon tower and the Cable Building. The latter is not actually a part of the University of Denver. It was originally intended to be a memorial and museum to the Cable industry and communication in general but ended up as a conference center. The librarian will still provide tours of the archives with advanced notice. 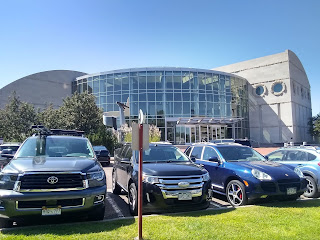 
Across the street is University Lightrail Station. Like all the light rail stations in Denver and many of the bus stops, University Station displays original works of art. 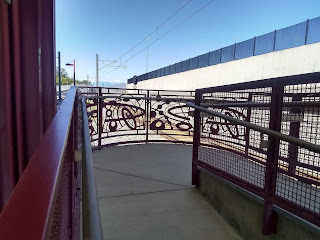 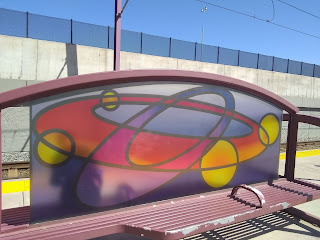 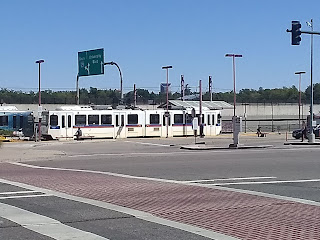 
The station also had a stacked parking garage with nice views of the urban forest and the Front Range of the Rocky Mountains. 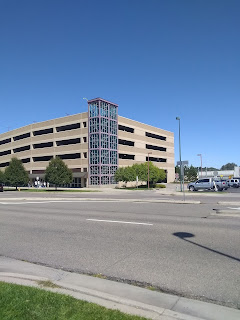 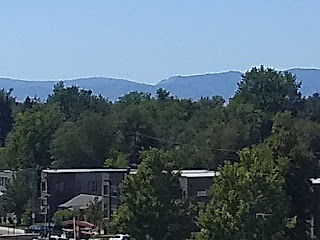 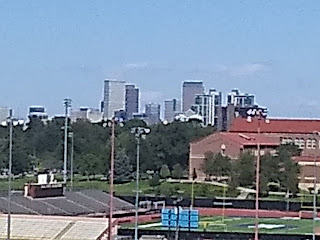 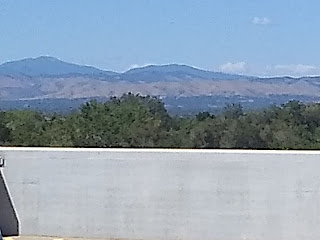 [RTD parking garage and views from the top]


A walk down Buchtel to Downing afford nice views of a quiet residential area and a loud interstate.


Further south, Downing has a surprising shopping area that is reminiscent of small town America with shops, a dinner, and Keith's Coffee Shop. 
Another walk up Harvard Gulch brought me back to University Blvd. 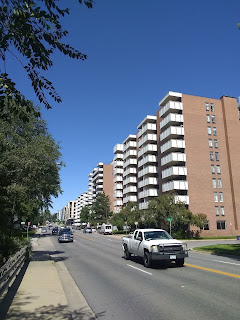 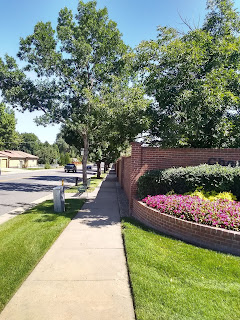 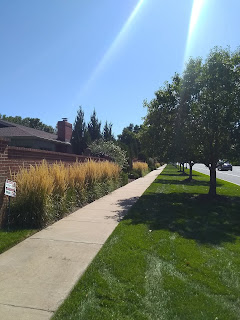 
And to my starting point.


All neighborhoods have histories and points of interest. Some are more in the open - some, you have to dig for. What's in your neighborhood?