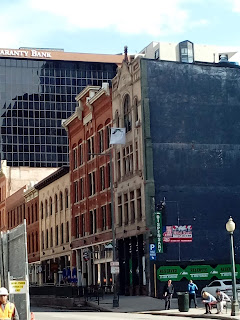 My plan for March's rail hike was to take the 16th street MallRide bus from 16th and California Station to Union Station and walk back to 16th and Stout. On the walk from home to University Station I noticed a decal of a candelabra in a high window in the Cable Center at Denver University and decided to go in and ask about it. I had been curious about the Cable Center for some time and I'm glad I followed my urge. 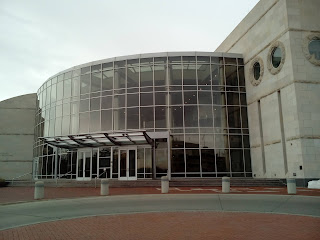 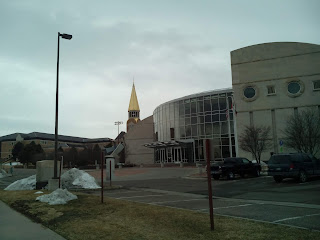 It turns out that the Cable Center is not even a part of Denver University. It is a resource center and memorial to the cable industry in the United States. It was originally funded by several leaders in the industry and was intended to be a museum. It still houses an archive but has become more of a conference center.

The building in a beautiful example of modern architecture with a high ceilinged, glassed-in front lobby. The receptionist was friendly and informative and explained that the librarian will gladly schedule a tour - that's a possibility for a future hike. I didn't get a backstory for the candelabra.....

The Cable Center is also worth visiting for the landscaped amphitheatre to it's east.

After a conversation with the Cable Center receptionist, I walked across the street to University Station and caught the light rail train to 16th Street and California. This area is a couple of blocks from the downtown Denver conference center and theater district and is the heart of downtown. 16th Street Mall is closed to regular traffic, reserved for pedestrian traffic. The MallRider buses keep a constant route from Union Station at one end to Civic Center Station at the other end. The pedestrian mall doesn't extend all the way to Union Station but  becomes an actual street around Wynkoop, a couple of blocks from Union Station.

The free, electric MallRider buses replaced the old gasoline buses in 2016. They look modern but paradoxically have an air of the old San Francisco trolleys with people jumping on and off at every street.

Downtown Denver is full of surprises tucked away amidst the skyscrapers. For instance....this bell tower. 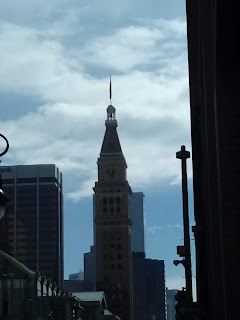 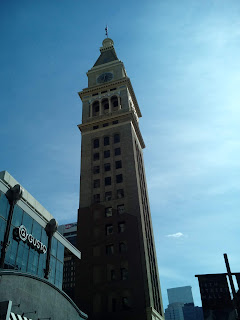 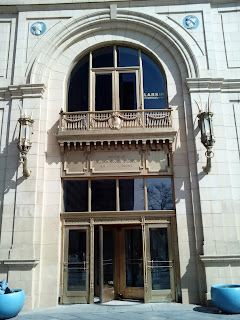 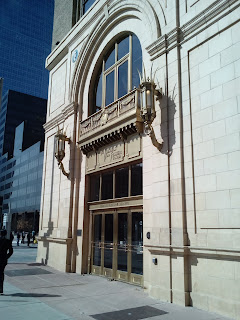 It was originally a department store. The Daniel and Fisher Department Store opened in 1911. The interior is swank with brass fittings and plaster and marble ornaments. 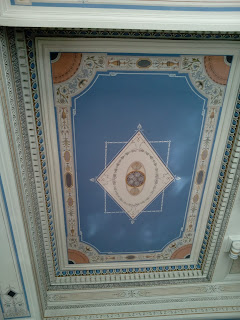 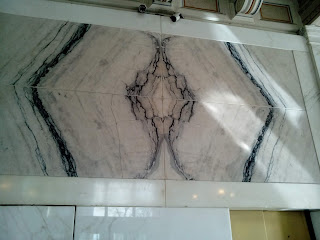 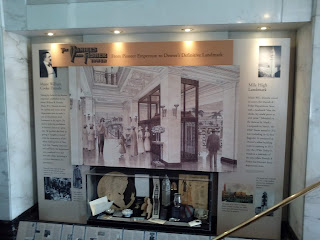 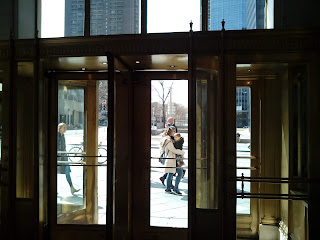 A little further south is the Federal Reserve Branch Bank. Denver is the Washington D. C. of the West. Not far away from the Federal Reserve is the Denver Mint. There are currently four active mints that create United States currency: Philadelphia, Denver, San Francisco, and West Point. You can tell where your coins come from by the letter somewhere on the coin: P, D, S, or W. There used to be other mints, for instance, New Orleans (mintmark O) used to print coins. I haven't been to the mint yet, but I hear they have a good tour. 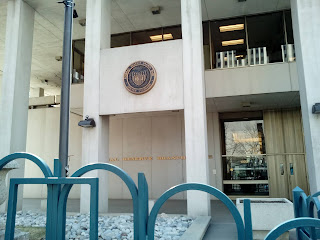 The self guided Federal Reserve tour is well constructed and well worth the price (it's free). It shows you how to spot a counterfeit, among other things. There's also a nice money collection.

The walk from Union Station to the light rail is short. Actually, if you wanted to make a day of it and you breezed through it, you could easily take in the Highland Bridges at the northern end of 16th Street, check out the restaurants, theaters, and attractions along the Mall, see the government buildings and memorials of Civic Center Park, and then go one street over to the library and it's history museum, the art museum, and the History Colorado Museum. Better, though would be to take it in several day visits. There's a lot to see in a very little area.

Your town may have some interesting federal buildings. I lived just down the street in Selma from the federal courthouse with it's stately arch. Government buildings - federal, state, and local, can make interesting destinations. They often have historical and artistic displays and sometimes, they provide guided tours.

Posted by Wolf VanZandt at 1:59 PM