Here are several sources of information about the Highline Canal.

One thing you will notice right off is how the canal meanders across the countryside for 71 miles.

Actually, that is not exactly correct. Rivers meander - the canal does...something else.

The reason a stream meanders is that various factors pull it in different directions - the same kind of factors that makes a thin stream of water meander across a gently sloping pane of glass. The glass isn't perfectly smooth so the stream has to flow around the tiny imperfections. Also, the earth is rotating out from under the water as it flows, creating the Coriolis effect.

The South Platte River shows this kind of meandering as it flows through it's valley near Denver and, even more as it flows out onto the plains.

The Highline Canal is very convoluted for another reason. It follows the topographic contours of the eastern rim of the valley cut by the South Platte River. It flows by gravity so it's gradient must always be down and the Highline flows downhill at a gradual 2 feet every mile. If you've ever looked at a topographical map, you know that it's rare that a contour ever follows a straight line.

The highline canal, at a stretch, could be called fractal. That would not be completely accurate because fractility implies repetition at different scales. If you magnify a design and it looks the same at each magnification, that would be fractility. The classic example is the Mandelbrot set.

In physics, scale is capped by the size of the universe at the top and quantum "graininess" at the bottom. There are no such limits in mathematics. You can always come up with a smaller number. So when I say that the Mandelbrot set has infinite detail, I mean it. You can keep magnifying the Mandelbrot set for ever and you will still discover more detail.

Check out this series of magnifications of the Mandelbrot set. 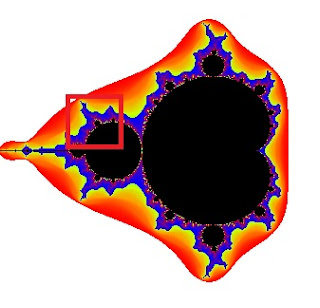 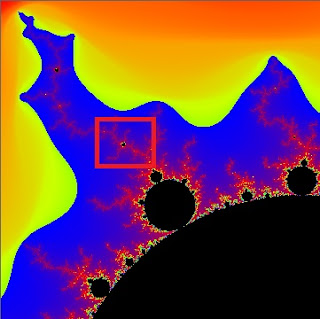 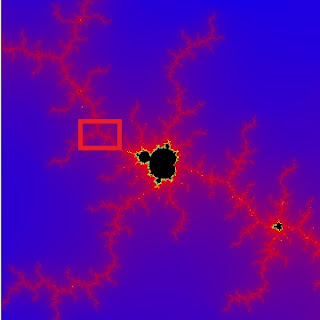 That last one....is that a tiny Mandelbrot set that I see? Why, yes...I believe it is!

There are, in fact, an infinite number of Mandelbrot sets embedded in any Mandelbrot set. There are also other designs like this one. 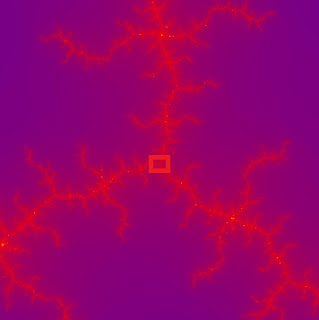 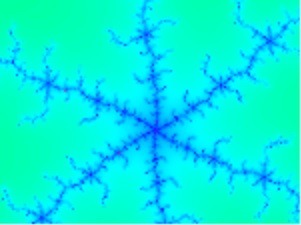 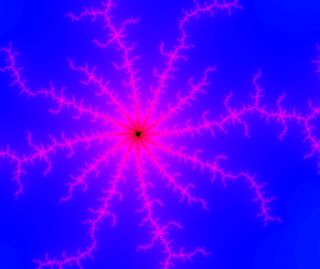 [Detail from the Mandelbrot set]

A shocking detail is how the Mandelbrot set is generated. It grows from this simple equation.

[Equation for the Mandelbrot set]

This equation tells you to set c to some complex value and then calculate the result of the equation when z is 0+0i. Next place the result back into the equation as the new value of z and keep doing that.

To create the Mandelbrot set, you just do that for every value of the complex plane and, if a point "explodes", graph it. You can use different colors to indicate how quickly it explodes. The points that don't explode are members of the Mandelbrot set.

If you look at a map of the Highline Canal, a mile long section doesn't look like a 10 mile long section and there doesn't seem to be a copy of the whole canal hidden within a shorter segment, so it would be a stretch to call it "fractal". But is complexity conserved at different scales? In other words, is a 5 mile segment just as wiggly as a 20 mile segment?

Obviously, this could only go so far. A 5 foot section of the canal is not complex at all - it would look straight! But what about "reasonable" lengths - something you could see on a map.

There are measures of complexity that require a computer and a very complex equation to calculate - I wanted something a little simpler. I decided to use a measure that compares the "hiking distance" of a section with a "as the crow flies" section. The Highline Canal trail has been measured - I'm going to assume that the trail mileposts were set up according to hikers with pedometers, but I don't know. I can determine straight line distances using the Google Maps measuring utility.

Ratios are dimensionless. As a fraction, if the numerator and denominator units of a ratio are the same, they cancel out. That's good for my purposes because, a ratio of two measurements will be the same whether the units are feet, miles, or kilometers. They aren't dependent on scale.

I have a ratio for the entire trail, four for the quarters that I'll be walking this year, and 15 for the roughly 5 mile segments shown in the Highland Canal Conservancy maps. I've also calculated the arithmetic and geometric means and standard deviations for the quarters and segments, and I have a histogram for the ratios for the segments. 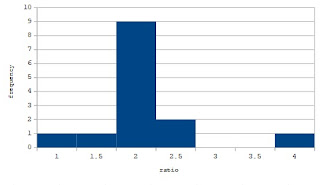 The reason for the histogram is that, if the distribution of the ratios looks close to normal (which it probably is not), I can put some stock in the statistics I've calculated. Luckily, the histogram shows a curve that could be mistaken for normal - it's probably binomial but I'll ignore that.

The Highline Canal is 71 miles long, walking distance. As the crow flies, it's only 30 miles long. The ratio is about 2. How similar are segments of the trail at different scales?

The quarter ratios range from 2 to 3 for an average of 2 and a very similar geometric average. The calculated standard deviation is about 0.4. Smaller standard deviations mean less variation. If you select a 20 mile segment of the canal trail, there is a 68% chance that it's ratio will be within 0.4 of the average: somewhere between 1.9 and 2.7.

The 5 mile segments look very similar in terms of complexity. The average and geometric average ratio is close to 2 which is well within the expected complexity of the quarter sections and not far off from the ratio for the whole trail. The standard deviation is about 0.7 - more variation than what is seen in the quarter sections, but still not a lot.

If you walk the trail, you'll see what I mean. You can see that it's very "wiggly" from the maps. There are places that you can walk 10 minutes and you find yourself very close to where you were 10 minutes ago.

Some parks have very convoluted walking trails simply to pack longer trails in smaller areas. Complexity can be useful. The Highline canal is convoluted so that it can follow the terrain with a constant, very shallow down-hill gradient.

On a surface more complexity provides more surface area. Your small intestine membranes are very complex, packed with tiny fingers jutting into the inner space of your gut. They increase the surface area of the membrane that absorbs nutrients from your food. Chemical engineers who design catalysts for things like catalytic converters and chemical reactors want the catalysts to have as much surface area as possible so that as much of the reactants can get to the catalyst as possible.

If the Mandelbrot set could be translated into a physical object, it would have infinite surface area and would make a great catalytic surface or absorber. Of course, it can't, but you can see why fractal surfaces can be useful.

If you would like to explore fractals, there are many Mandelbrot viewers on line such as the one at:

There are many examples of fractals in nature. The way limbs split off a larger limb looks a lot like the way the larger limbs split off even larger limbs, and the way vein in leaves divide. Smaller sections of the swirl of sunflower seeds look like the whole swirl. The next time you walk, look for fractals on the trail. You might be surprised at how common these intricate patterns are.