Before I even get started, let me warn any through hikers on the Highline Canal Trail that there is currently no easy way around Plum Creek on the trail. You can walk a long way up Titan Road and north on Santa Fe, both heavily trafficked much of the day with little shoulder to walk on, or you can walk across the entire width of Chatfield Lake State Park, a large and hilly expanse, to Mineral Road and take the Mineral Trail up to reconnect the the Highline Canal. As detours, I wouldn't recommend either although Chatfield State Park and the little parks along the South Platte River are at least scenic.

I took a Lyft to the Colorado Trail trailhead Thursday, February 28 with the intention of walking 18 miles to the Elati Street trailhead of the Highline Canal, but, as the very nature of adventures is to throw curve balls, I only made it seven or eight miles (maybe further after wandering around looking for a way around Plum Creek). I did, nevertheless, enjoy the hike. I realize that the Rolling Stones were correct - "You can't always get what you want."

Expecting a long walk well into the night, I got up at 6:00 and was out as the sun was rising. 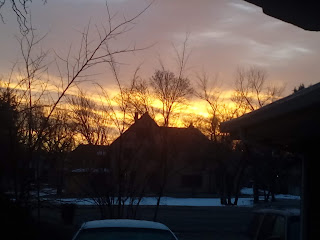 By the time I reached the trailhead across from the Kassler Center in bright daylight. The foothills were gorgeously speckled with patches of snow from the big snowfall the weekend before. 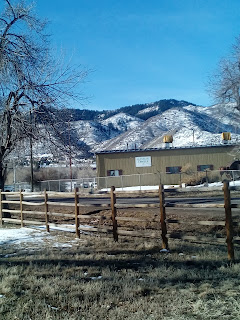 My plans required a short roadwalk south along Waterton Road to the canal. The Lockheed-Martin plant is ever visible through the first stretch of the trail to Plum Creek. 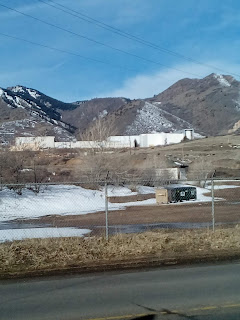 It doesn't snow constantly in Denver during winter but it does enough that there is usually snow on the ground. This is probably a pretty typical view of the South Platte in the winter. 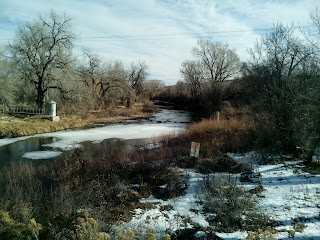 There is a reservoir, the Platte Canyon Reservoir,  at the Waterton Road Trailhead that draws water off the canal for storage. It seems to be popular for water birds. I hope these like the ice. 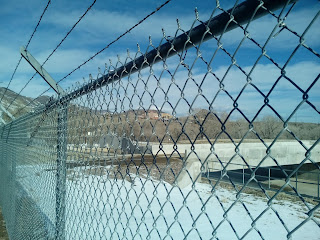 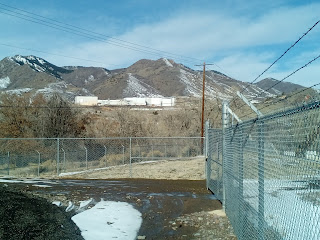 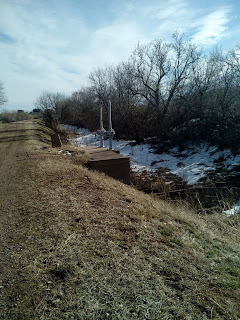 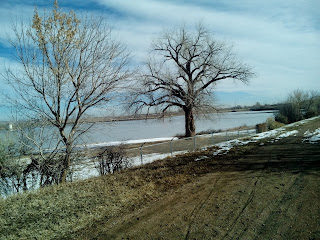 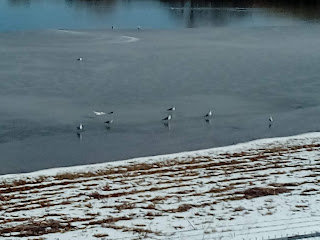 [Birds - look like gulls to me, there were also ducks but they were too far out for a photograph]

The first few hundred meters of trail were paved and the canal was dry except for stretches that ran with snow melt. 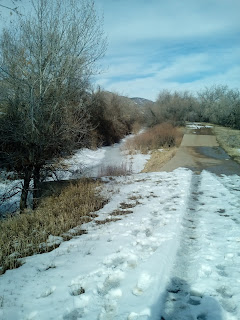 [Snow on the trail]

I saw a lot of this rosy leafed plant on the side of the trail. I'm pretty sure that it would have been green during the summer and I'm not sure what it is - maybe a potentilla? I thought it was a red moss at first. Out of all the wildflowers, I think I like the belly flowers most. Those are the ones you have to get down on your belly to see. They are often some of the most intricate, colorful blooms. I'd like to see what the flowers on these look like. 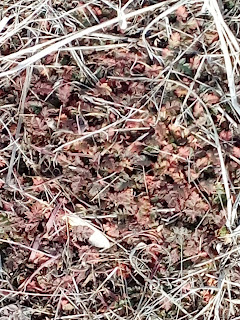 Much of the Highline Trail in this area runs through private properties. There are a lot of horses and cattle. 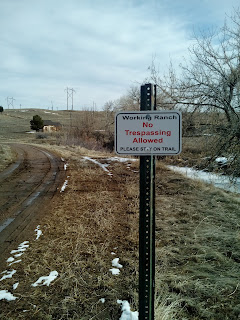 This ranch has a log cabin on its grounds. 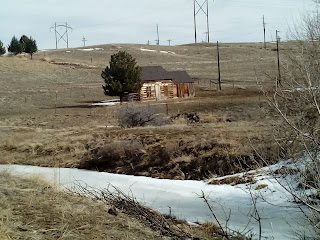 And, here, the canal actually looks like a canal with snow melt. 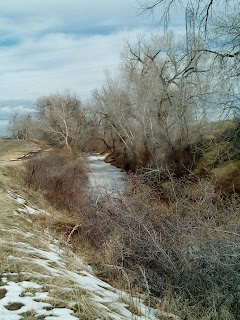 The power lines that cross the Highline Canal carry lots of juice to Lockheed-Martin which could be considered the gateway to space, since they build rockets.  Denver is very space conscious. The School of Mining in Golden has begun a focus on technology to mine asteroids, for instance. 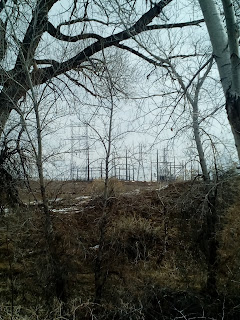 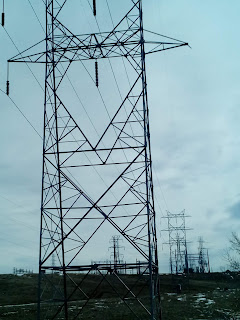 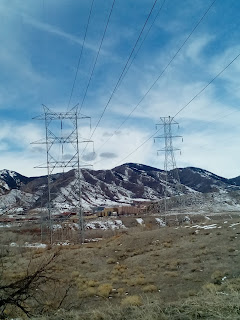 The trail along the boundaries of Chatfield Lake State Park affords great views of the Front Range. The hills in the foreground hide Conifer and the one in the middle distance is Mount Morrison. Further back is the mountains around Golden and Green Mountain. 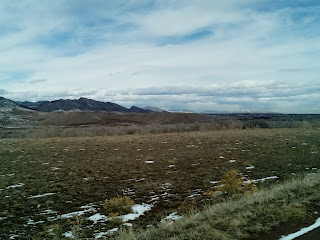 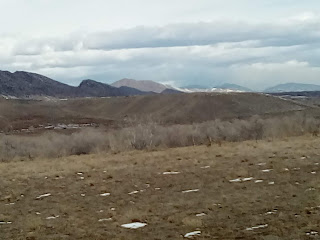 I didn't see a lot of wildlife (or tracks), but I saw or heard many hawks, like this fellow, 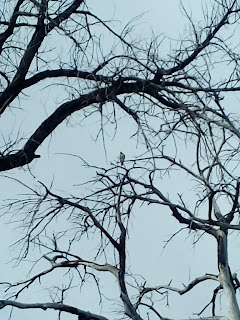 and this herd of deer. They seemed to be used to two-legged pedestrians. 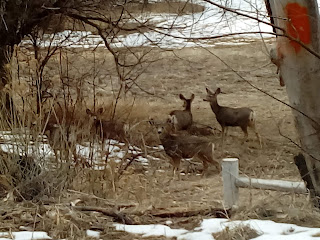 This area makes it clear that the high plains butt right up against the Rockies. There's very little transition. 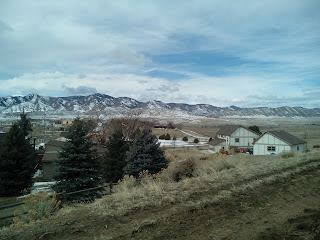 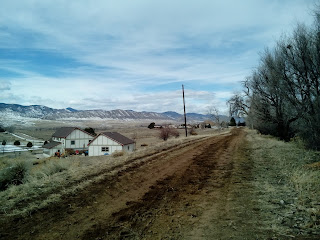 On the Highline Canal Trail, mileposts are your friend. They appear every mile and mark mileage from the Waterton end of the trail. 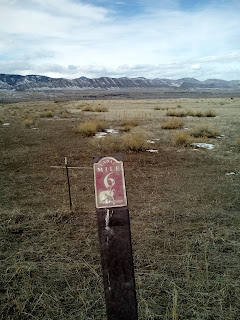 The views around the lake are nice (if you don't look in the direction of the construction). The water is down considerably and this is definitely high plains. 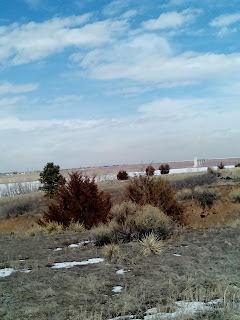 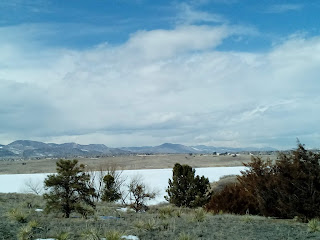 As advertised (in the Highline Canal Guide), the Denver skyline is visible from the park but, on this day, there was a gray-brown haze around the city that wasn't very photogenic, so I passed that picture up.

The end of my adventure was a long wait at the parking area at Roxborough Road. I won't go into detail about how my phone's battery died at a crucial point and I had to finagle a way back home, but I will say that the other hikers and the Douglas County Sheriff's Department are great and that Call Box at the parking area? It works.

If you live in the Denver area or will be visiting, you might want to check out the 71 mile long urban Highline Canal trail. The canal is a weird tributary of the South Platte that flows away from the river and crosses roads and other streams. You can check it out on the Internet here:

How's winter in your area? Do you have snow? Are there plants that are especially adapted to your winters? Does the wildlife behave differently?

Posted by Wolf VanZandt at 1:11 AM