There is a fractility in the United States government. What I mean by "fractility" (and I will be talking much more about that as time goes on, because it is one of the characteristics of complexity) is that patterns on one level are repeated on other levels. This patterning allows a balance of powers, the pattern is three-fold and the three parts are set against each other (if things work right). Any one of the three parts can stymie either of the other two parts if it really wants to. The founders of American government quite consciously and intentionally crippled the government.

Why? Because they didn't trust government.

Executive - legislative - judicial. Those are the three branches of government in the United States. The legislative branch makes the laws, the executive executes them, and the judicial interprets them.

If you want to see an instance that breaks the three-fold pattern, check out Louisiana.

I visited the site of the headquarters of the first two branches of government in Colorado in January. It's the capitol. Both the governor, the head of the executive branch, and the legislative branch are housed there. The other branch is more complicated and is scattered around all over the city and, indeed, across the state. But the highest level of the judicial branch is located just across Civic Center Park from the Capitol in the Ralph L. Carr Colorado Judicial Center located at 2 E. 14th Avenue, Denver, Colorado near Broadway. This is the highest court of appeals in the state of Colorado. If you have a problem that you need to carry to court, you start at the bottom and if you don't like the result and you can convince a higher court that the lower court made a mistake, you get to move up the chain. The Supreme Court housed in the Ralph L. Carr Building is the end of the line - the highest state court. From there, if it's actually a federal issue, you might be able to jump to the federal supreme court in Washington, D.C., but that's a little far for me to walk so, on the 26th of February, I visited the Ralph L. Carr Building, and monumental structure, more modern, but, in many ways, just as spectacular as the Capitol across the street.

I took the light rail from University Station to the Convention Center Station and walked down the 16th Street Mall to Civic Center Park around which much of Colorado government takes place. I guess I could have taken the Mall Flier Bus the few blocks down to Lincoln or Broadway, I enjoy the walk through downtown.

Walking around the perimeter of Civic Center Park carried me by the monumental City and County Government Building that encloses the park, with the Capitol like a set of parentheses. The curve of the facade and the ornate columns match the classical style of many of the other buildings around the park. 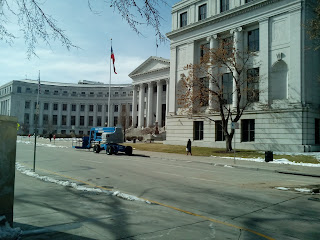 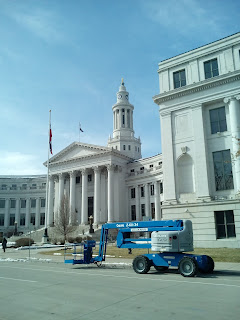 The Denver Public Library is just to the east of the Ralph Carr building with its disparate jumble of sections looking much like a modernized castle. To the south are the art museum and History Colorado museum. You could spend a couple of days just looking around this area. 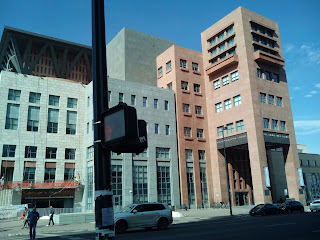 The Ralph L. Carr Building as a modern counterpart to the stately classical style building around it. There are columns and a rotunda but the columns are square and the rotunda is glass. 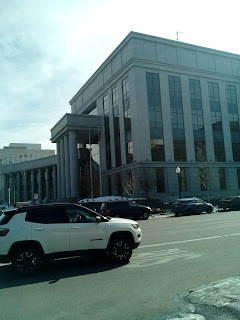 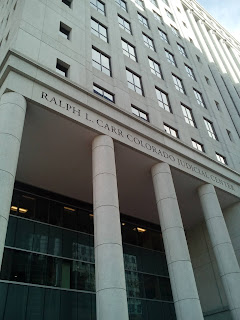 If you've followed me in this blog, you've heard of Ralph Carr. His statue is at Sakura Square to commemorate the governor who bucked public opinion to speak out against the treatment of Japanese Americans during and after World War II.

The interior is beautifully adorned with modernist murals and the floor of the rotunda is decorated with a stylistic columbine blossom. 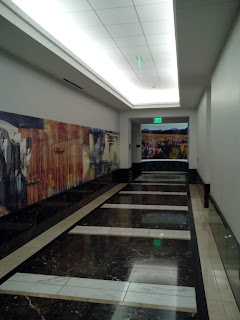 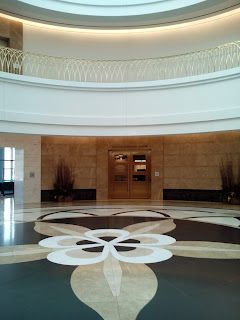 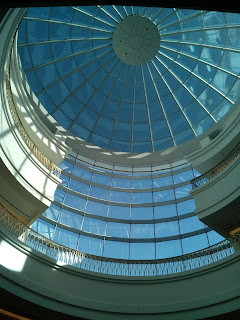 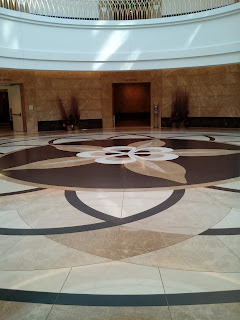 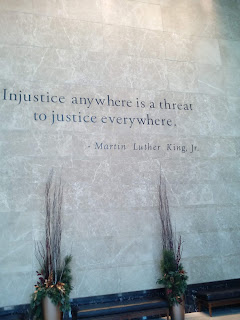 [Interior of the Ralph Carr Building]

The learning center is just off the main lobby on the first floor. Although photographs would not convey much about the room, if you want to know about the legal process in the United States and Colorado, visit it. This is your complete and fun education of the judicial system. Interactive exhibits let you experience the parts of judges and lawyers. The history of the courts is laid out on columns. And, if that's not enough, plan your visit so you can sit in on a deliberation of the court. 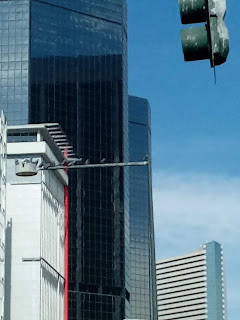 In the United States, it's too strong to say that you are controlled by your government (still, if you don't understand how the government works, there's a good chance that you are controlled), but you are regulated. That's not necessarily a bad thing, but does it really make sense to be regulated and not know how you're regulated? In the United States, the courts, legislature and executive branch are transparent. If you want to know how they work, you have every opportunity to do so. If the wool is being pulled over your eyes (so to speak) it's because someone walked up to you and said, "This is wool. I'm going to put it over your eyes and while you can't see, I'm going to do things....you might not like it." Sooooo.....one of the things that every citizen of a country should make it a point to know is how their country works.

A visit to your country's, state's, county's, city's seat of government is fascinating and fun and what you learn there might or might not change your life, but it will certainly help you avoid wool.

I was hoping that some folks would use the comments as discussions about topics I explore. I don't make it a point here to talk about what I learn on adventures because I want to encourage people to go out and experience their world for themselves, but I would be glad to discuss things that interest readers here in the comments.

By the very nature of my adventures, I look at everything and end up with so much information each trip could end up being a book. I couldn't fit it all into a blog, much less a single article.