It's not surprising, given the Asian populations in Denver, that there are many, and a great diversity, of Buddhist churches. I believe I've found all the denominations I know about within the Denver area.

Most of my Christian friends have been adamant that Christians should avoid nonChristian religions. Yoga was verboten since it smacked of Hindu. But, then, that doesn't go very far in explaining why Paul quoted nonChristian philosophers in his letters (I Cor. 15:33 and Titus 1:12) and in Acts 17:28.

I find three Christian Buddhist churches in the Denver area (http://www.mayusanctuary.com/index.cfm/id/26/Denver-Centers): Contemplative Outreach of Colorado, Loretto Spirituality Center, and Montview Boulevard Presbyterian Church. Looking at the Loretto site, it might be more accurate to call their form of Christianity "contemplative Christianity" and leave the "Buddhist" tag off. I find the Buddhist message, to live a non-grasping lifestyle, to be a needed anodyne for modern Christianity.

I set off early March to check out the small Buddhist temple just off Estes Street. The people I met spoke only a little English and with difficulty but they were friendly. I did gather that there was a monastic community in the Denver area. 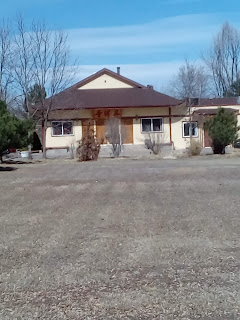 On 7/20/18, I hiked over to the Ross-University Hills Branch of the Denver Public Library where they were having a program on Buddhism. The program was put on by a local organization called Active Minds and I applaud the library and Active Minds for presenting informative, educational presentations to the community.

The presentation was quite introductory, but enjoyable for me in that the presenter had traveled in areas of the world where Buddhism is a majority religion, and he shared personal anecdotes. He also included contemporary issues, such as the awkward interactions between various forms of Buddhism, the Chinese government, and Muslim communities. I had not heard that the Dali Lama has decided that he may not reincarnate this time. That may not mean much to Christian and secular populations in the West but it could be earthshaking for adherents of Tibetan Buddhism - which could turn into something that is simply earthshaking.

Ripples of causation - that's karma and we have to deal with it regardless of what our religion is.

The Domo Japanese Restaurant is a mixed adventure. I ate there on my hike from Auraria West Station to 10th Street and Osage Station.  The raman dish was large and full of many interesting thinks. I'm sure I saw dicon radish and chicken but I'm not sure what the rest were. As for the three sides, I didn't ask questions and thoroughly enjoyed my lunch. Afterward, I wandered through the garden. There were several shrines there. I saw several offerings placed before the statues of Buddha, so they can certainly be seen as places of worship.

Perhaps the outreach ministries they support for refuges from Myamar should be considered acts of worship, also. Collection boxes for the Akido Humanitarian Active Network were located in close proximity to the shrines.

You may be interested in checking out the Domo's websites.

There are several Buddhist cultural centers in Denver, in addition to the Domo Restaurant. See my blog: A Trip to Asia for my account of a visit to Little Saigon.

Also see the blog: Terminus: Union Station for a description of Sakura Square.

Are any of your neighbors Buddhist? If so, they don't proselytize but most of the Buddhists I have known have been happy to talk about it. Perhaps there is even some public Buddhist art in your area or a lecture you can attend. Other religions are part of your world and, since they certainly affect you, often without you even knowing, it's a good thing to be interested.