So, what's the difference between a rule and a regulation. I looked it up.

A regulation is created by an authoritative governmental body who has the delegated authority to enforce it. A rule is not.

I still get confused because rules can be enforced, usually not as strictly as a regulation. It's against the law to hold up a grocery store and you can expect serious repercussions for doing so. Walking into a grocery store barefoot, even when there are signs forbidding it on the entrance, is not, I think, against the law, but many grocery stores hold it as a rule, and they can kick you out if they catch you doing it. My confusion stems from the fact that, in documents that list rules and regulations, they don't often distinguish the rules from the regulations. I guess you just have to guess. 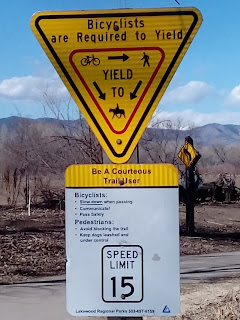 Ever played rock-paper-scissors? Well, on Bear Creek Trail, horses trump bicycles and hikers, and hikers trump bikers. Actually, it makes sense. Horses can be spooked by things coming up beside them. Their peripheral vision isn't that great to start with. Everybody loses if you spook a horse. Same goes for a bicyclist running over a hiker. And bicyclists can move a lot faster than a hiker to get out of the way.

Bikers can go faster here, though. That would be because it's in the middle of a prairie dog town and you can see what's around you for a long way. 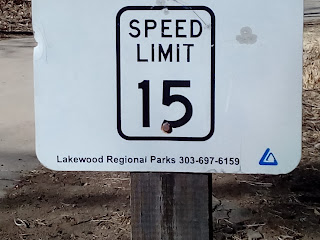 Most of the bikers on Bear Creek, when they are coming up behind you, will say, "On the right." I've gotten over the urge to jump right.


And there's who I contacted to tell me about the rules and regulations thing. If you're traveling to Denver and you want to know about Bear Creek Trail, Lakewood Regional Parks manage the western half. They also have a website, here: 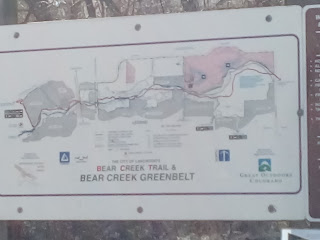 Map of the western half 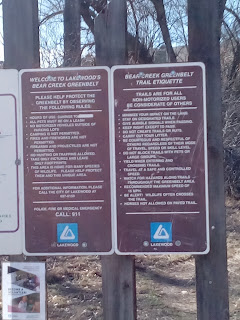 Traffic signs happen on trails, too. Some of the topography can be surprising if you're not familiar with your surroundings. 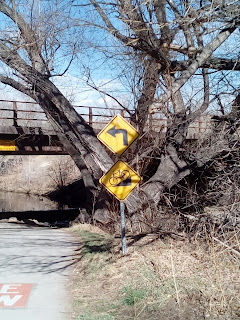 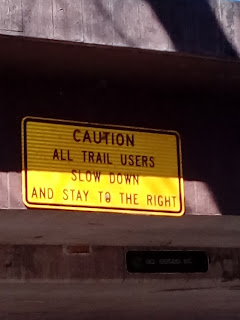 Honestly, I see the need for people to pick up after their pets (they certainly can't do it for themselves) and providing doggie bags for the purpose is a great thing, but keeping poop (or, sorry, poo) before the public's eye - I wonder if anyone has done research to see if displays like this really does any good. 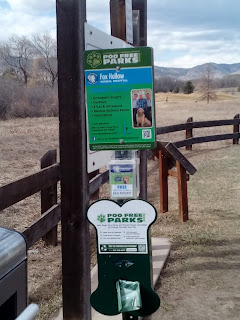 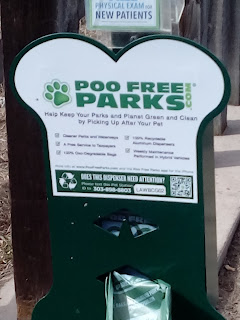 A cursory examination of Google Scholar citations on "pet feces" indicate that it's not a good thing to let pet feces just lie around, but I could not find a study on the effectiveness of different programs to change the behavior of pet owners. That sounds like a great graduate study to me.

Here are some of the pictures I took on that alternative trail I wanted to check out. It sorta looks like a desert trail and, technically, Denver is high desert, but it has it's interesting points, including some beautiful views of the Rockies and the countryside to the east. But it didn't turn out to be any easier or quicker. As you can see, it's all up and down. 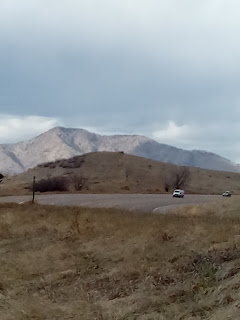 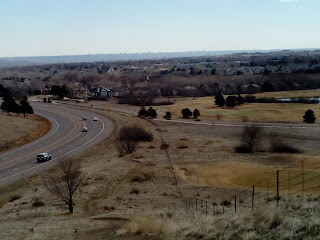 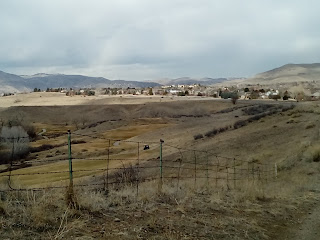 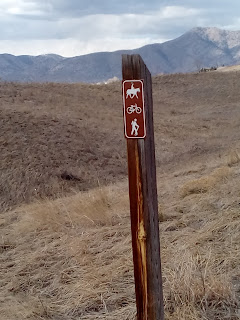 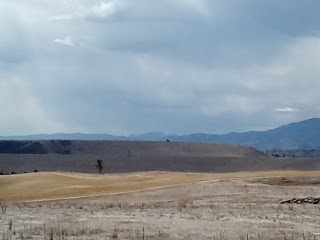 The trail parallels Morrison Road, which is what gave me the idea that it might offer a straighter shot to Morrison. At one point, it runs alongside a small canal, and connects in several places to the North Park Trail. 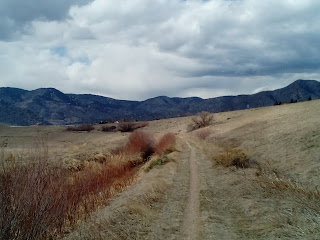 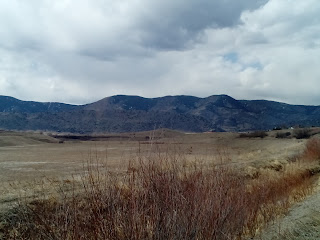 But it does ultimately lead to Morrison where I noticed this old fire engine on display for the first time. 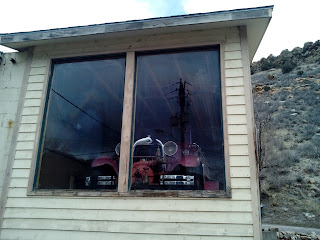 And I stopped in at the Mill Street eats for a great burger and shake before returning to the trail.

These two ducks were completely ignoring the signs emphasizing how dangerous this dam across Bear Creek is. 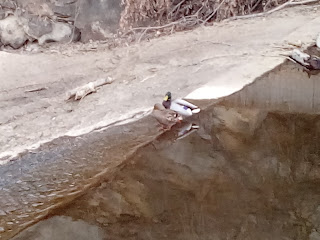 On the way back, clouds were building up in back of the Front Range and there was thunder. Normally, I wouldn't have been that bothered except that this was where I was and the nearest shelter was on top of that hill (Mount Carbon). So I double timed it up the mountain and got to the top just about when the wind hit. The worst of the storm went around to the north, though. 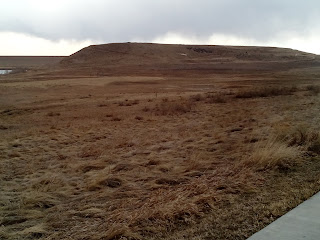 I did stop in at the Visitor Center earlier and found out how Mount Carbon got it's name. It seems that coal and clay for ceramics was, in fact, mined there for a short time. There was even a small town named Cowen and a railroad spur line in the big depression now occupied by Bear Creek Lakes Park. The area where mining took place can still be seen as a trench in the top of the mountain. The Robinson brick company started up in 1910. It closed in 1912. Mt. Carbon school was built earlier in 1878 and taught grades 1 through 8. It closed in 1920.

The mining operation quickly played out and the town was abandoned. The flood of 2013 took out the rest of Cowen and now it really is a ghost of a town.

It sorta reminds me of the Old Cahaba Archaeological Park near Selma, Alabama. I used to call it "the only park where you have to imagine what you see." So, maybe it's not the only place like that. Both places have their draws. You just have to use your imagination if you want to see the towns.

Bear Creek Trail itself runs through two golf courses on the eastern side of Mount Carbon and signs bear witness to the fact that golfers and hikers are mixing, and that golf courses are sometimes private property. 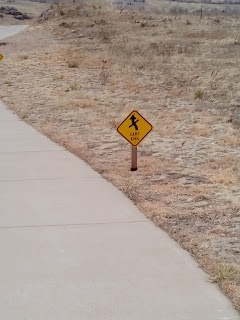 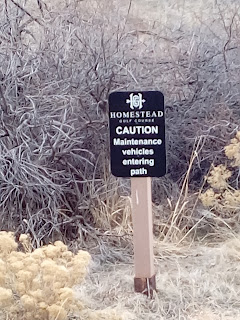 I made my way back along the way I came to Wadsworth Boulevard and buses to where the storm finally caught me waiting for a bus at Englewood station. Suddenly very cold and getting wet - I called a Lyft cab and got myself to home.

The moral of that story is: always have alternatives.

Posted by Wolf VanZandt at 5:33 PM