On Friday, February 16, I hiked the first half of Bear Creek Trail, from River Point Shopping Center to Wadsworth; then, on Thursday, March 15, I completed the trail walking from Wadsworth Boulevard to Morrison, Colorado. I was studying the signs - rules and regulations - of the trail, and I wanted to try out an alternative route around Fox Hollow Golf Course and Bear Creek Lakes Park that might provide a more direct, quicker path to Morrison than Bear Creek Trail and Mount Carbon Loop Trail. It didn't turn out that it gives me any advantage but there were some interesting items on the way and I found out some other interesting things about the area, such as why Mount Carbon is called "Mount Carbon".

I'll be blogging about this trip over the next few weeks. 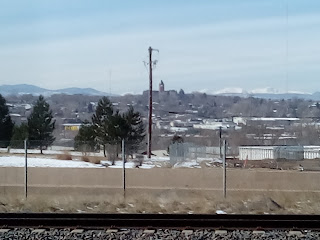 I walked down to Englewood station, which is about 2 miles down the hill and boarded the train for Oxford station, which might be a mile down the tracks. From there, it's a short walk through River Point Shopping Center to the place where Bear Creek trail joins the Platte River Trail. There were still patches of snow and, where water poured from drains, there was still ice sculptures. 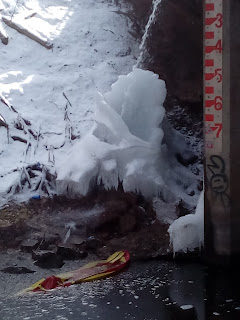 Most of the trail runs between lands owned by private individuals or groups.  Just before Knox Court, there is a Colorado Department of Transportation facility. There's another past Wadsworth. As shown by this sign, private and public concerns often create conflict. 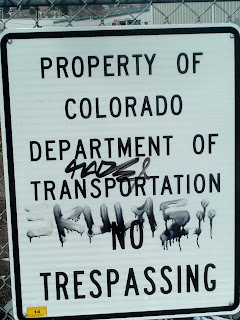 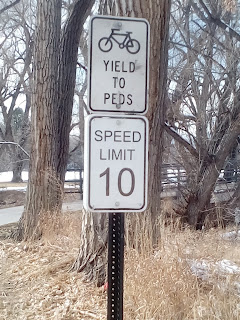 I couldn't walk 10 miles per hour if I wanted, but I guess bicycles could top that. Speed limits are usually imposed on sections that get a lot of foot traffic. Most of the traffic on Bear Creek are very courteous people, but the rule that gets broken most often would be this one - I guess the need for speed is paramount.

Honestly, I don't know why they worry about dog poop when these are around most of the year. 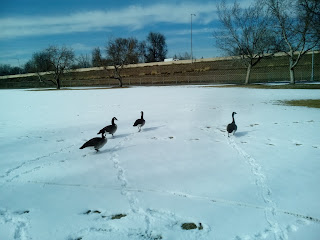 When I first moved to Colorado, geese would tolerate the presence of humans but they wouldn't let them get too close but I've noticed in the last 4 years that they don't respond nearly as strongly to nearby humans and will often let people within a couple of feet. Perhaps the warmer winters the last couple of years have brought geese and humans together for longer stretches of time. 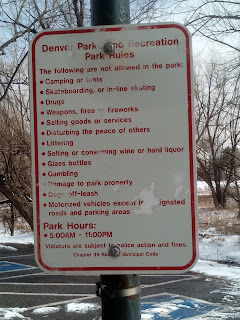 The rules posted in the park are reasonable. I'm not sure if marijuana is considered "drugs" anymore or not since it was legalized. I noticed that nudity wasn't included (don't get your hopes up - the broader principalities would gladly reinforce their own laws concerning that.)

Both Plato and Aristotle held good laws to be reasonable laws and Augustus of Hippo in his On Free Choice of the Will opined that "an unjust law is no law at all."

Many of the early Americans stated similar ideas. Henry Ward Beecher said "When laws, customs, or institutions cease to be beneficial to man, they cease to be obligatory." I take it that these people considered "man" to mean "all people". In a time where the wealthy make it an avocation to find ways to domesticate laws to their own personal servitude, I think the Denver Parks and Recreation have come up with rules that allow the most people to enjoy the lands set aside for recreation.

These particular rules and regulations were established in 2012 and updated 2015 (as specified in Chapter 30 of the municipal code - posted on the Internet https://www.denvergov.org/content/dam/denvergov/Portals/747/documents/rules/DPR_ParkUse_RulesRegulations_05272015.pdf accessed 3/26/18), so it's a dynamic work. The whole thing is 44 pages but it also includes mountain parks where there might be bears, Red Rocks where you might be tempted to climb on things that will kill you, and so on. The appropriate sections are posted where they apply. The Parks Manager for the Lakewood Community Center Resources Department, Steve Carpenter, in an email, said that violations of park rules and regulations can lead to warnings or citations. I often see park vehicles out patrolling the areas around the trail and it's evident that a lot of work goes to keeping the parks maintained. Mr. Carpenter mentioned that Lakewood police help on occasion and I have been involved in citizen volunteer efforts to clean up the parks. Denver seems serious about their outdoor resources and pedestrian throughways. 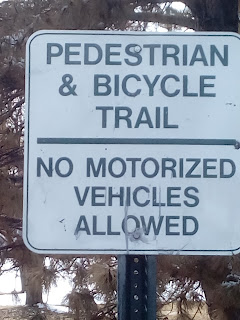 Bear Creek is primarily a walking and biking trail. There is a trail that parallels much of the length, the Stone House Trail, that is specifically provided for horse traffic also.

There are several picnic areas along Bear Creek Trail and they post their own rules. 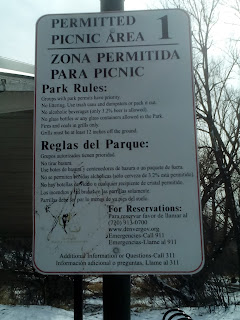 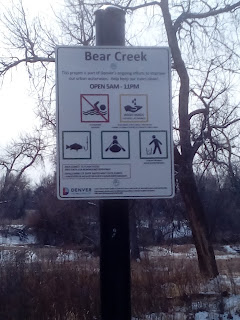 This one puzzles me. After Bear Creek Lakes Park, Bear Creek, except when swollen, smells like sewage. Why would anyone swim there, much less let their children do so, yet I often see whole families frolicking in the waters in Bear Creek Park. I guess they're exercising their American rights to dysentery. 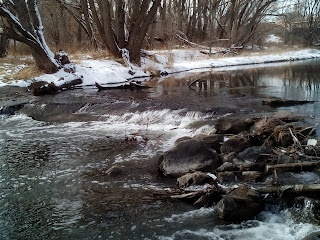 I've lived around Bear Creek for going on four years and I swear that, just in that time, this small cascade has gotten bigger. I like to imagine that one day, it will be an actual waterfall. 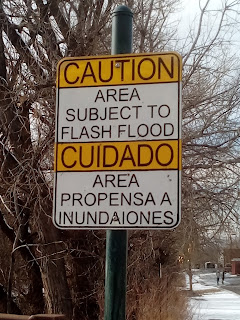 I've only seen Bear Creek flood once in four years. I had to either wade or backtrack and cross a major street during rush hour - I waded. But Bear Creek (and all the other streams coming out of the Rockies) have had disastrous outbursts in the past and, despite the excellent flood control measures taken in the last century - Bear Creek Lakes, Lake Chatfield, Strontia Springs Reservoir, the lakes along Cherry Creek, etc. - the last few floods are still in living memory. Even since the dams were built, there have been some destructive flooding, for instance, in Morrison and Bear Creek Lakes Park in the 2013 floods. You can tame nature to a certain extend, but when she wants to, she can always get you. 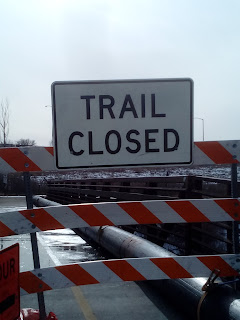 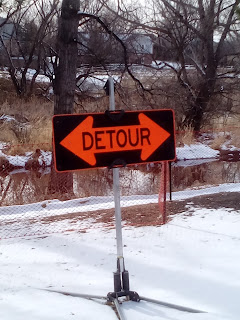 On this trip, a large section of the trail between Sheridan and Wadsworth were closed off for some construction. It was obvious (from the smell) that they were working on sewer lines. There are always reminders that this is an urban trail along it's entirety.

But, urban or not, it is a corridor for wildlife. 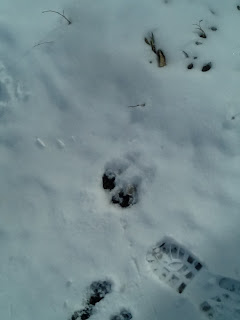 These were photographed at Bear Valley Park, right next to Dartmouth Plaza and Bear Valley Shopping Center. 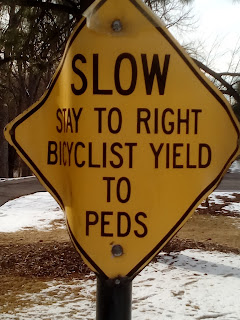 Signs get some abuse. This one stands at the end of Dartmouth where it takes a sharp turn. It looks like a driver didn't make the sharp turn. 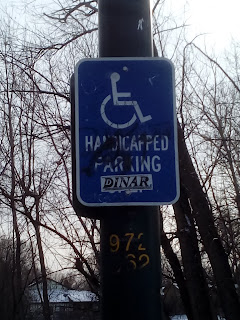 Denver Parks and Recreation tries to make the urban trails accessible to everyone. 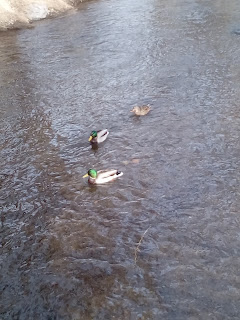 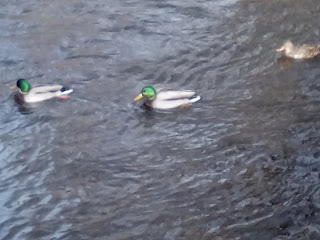 Ducks like it - they're everywhere. I've seen other waterfowl along the creek but it's mostly ducks and geese. 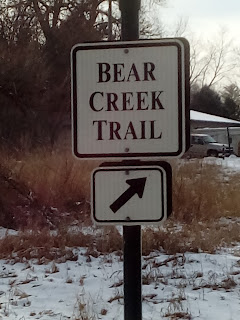 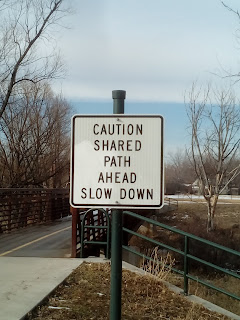 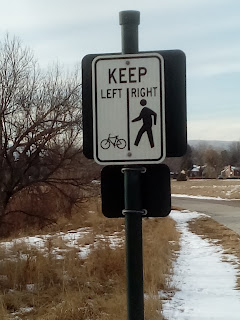 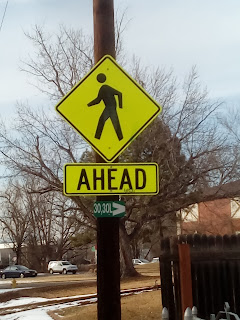 Since there is a variety of different kinds of traffic on Bear Creek, there is a variety of signs reminding people to be courteous. There are a few places that, if it were not for arrows, you could easily find yourself going where you don't want to go. Bear Creek Trail runs along a braid of other paths. Some just lead you to city streets, some go on to private properties.

For most of its length, Bear Creek Trail passes over or under busy city streets. There are crossings at Lowell Boulevard and Fox Hollow Drive, but many of the tributary trails cross streets and, although Denver is strict with pedestrian laws, as Sancho Panza says, "If the pitcher  hits the stone, or the stone hits the pitcher, it's bad for the pitcher."

Denver and Lakewood Parks and Recreation departments provides maps in several places along Bear Creek Trail. They obviously want you to know where you're going.