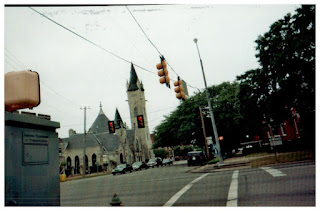 The First Baptist Church of Selma at Lauderdale and Dallas

As a Christian, when I walk into a church sanctuary, I feel as though I have entered a court - not a court of law, but the court of royalty. That's not a feeling commonly met with for most modern Americans, but I think it's appropriate for a person who has the core beliefs of the Christian church.

On the other hand, I must admit that churches are social organizations and, as they are today, play prominent parts in the functioning of local communities. It's hard to grasp how most communities function (in the United States, or in the world) if the church (Christian, Buddhist, Jewish, whichever is relevant) is left out of the picture.

There was a time (the Middle Ages) when being excluded from the church (excommunication) was complete exclusion from the majority community. Outside the church, a person was a rogue. That began changing during the Renaissance and the Protestant reformation.

More recently in the United States, in my lifetime, a person was viewed with suspicion and was, at least partially excluded from community affairs if they were not a member of a local church (and, remember, I'm not talking exclusively about the Christian church when I say "church".) Churches provided connection and support structures in the community.

One downside to that in the South was that, if you were not born into a church community, you never fully belonged. You might have friends, you might even have a good life in a Southern community, but you were not ever very intimate with the community like "other people" were.

When I began my professional career in Selma, I intended to visit several churches before deciding where I would settle. My first try was the First Baptist Church at Lauderdale and Dallas (there were two First Baptist Churches in Selma). There I stuck because I found a friendly and accepting group of people there. There were also other advantages. The administrator of the facility where I worked was a member there, as were some of my colleagues, and my doctor.

I'm still a member of the first Baptist Church of Selma at Lauderdale and Dallas even though I attend a church halfway across the country. I actually visited one other church before settling on the Christ Church Episcopal Church across the street but the same qualities decided the issue. Christ Church is a friendly and accepting bunch of people (and diverse - did I mention diverse? and I'm drawn to diversity.)

On my off-time in Selma, one of my activities was helping people find resources they needed to solve serious problems in their lives. I had a standard beginning. I would ask them if they had any family in the area. If the answer was, "no," then I would ask if they were a member of a local church. If their answer to that was, "no," I knew that I had some serious work to do.

A church is an extended family. I'm reticent to call a person a "friend" just because they belong to the same church that you are a member of, but you can generally rely on fellow church members in ways you can't rely on others. They aren't necessarily friend, but they are family. And, of course, like families, some churches are dysfunctional families - so I'm not selling churches, here, as a panacea for life.

What I am doing is pointing out that churches are not just religious organizations. They are very much a part of communities, and to understand the sociology of a community, you have to figure the churches into the equation.

If you feel comfortable doing so, talk to a few church goers about the place of their church in their lives. How much of what they say is religious and how much is social?

To see some of the more distressing aspects of church sociology, and I highly recommend this book to Christians particularly, you might want to look up and read "unChristian: What a New Generation Really Thinks about Christianity...and Why It Matters." It's written by two very Christian gentlemen: David Kinnamen and Gabe Lyons. And I will recommend to everyone Eric Berne's "The Games People Play."

Posted by Wolf VanZandt at 8:02 PM