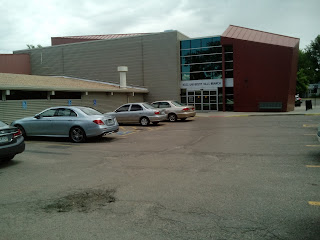 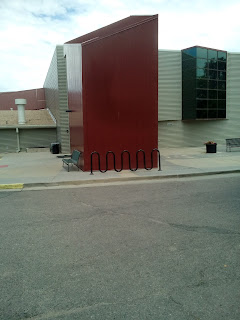 The Ross-University Hills branch of the Denver Public Library

This fellow was "cussin' a blue streak" at the dogs below him...or maybe he was just laughing at them. I don't understand squirrel. After all, he could just hop over to the fence next to him and run off. 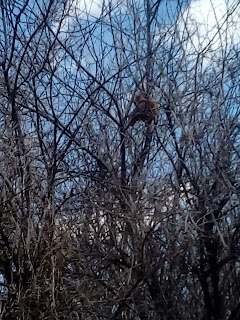 We are raised being told not to talk to strangers and I'm afraid that we maintain that attitude long after we have become adults.

To be sure, it's sometimes dangerous. I used to walk down mountain dirt roads, see someone on a porch, and strike up a conversation with them. That's not always the safest way to meet people.

But there are plenty of safe ways to interact.

In general, people don't like to talk to strangers in public. I've learned recently that, if a person on a sidewalk or trail is wearing earphones or ear plugs, they may not be listening to anything. It's just a sign that they don't want to interact with you. I didn't know that. I grew up in a time when people greeted each other.

Of course, there are many social groups that are there to bring strangers together, and I do include churches. The church I presently attend is big on bringing strangers into their group. I've been to some where members wouldn't talk to outsiders but that's the exception.

There are groups dedicated to discussion here in Denver. The Socrates Cafe meets on a night that I've already devoted to family activities, but it looks like it would be fun.

I volunteer for a discussion group for international students who are trying to get used to English as a second language. It's one of the highlights of my week. I learn a lot about diverse cultures, hear a lot of world languages, and compare a lot of different ideas and philosophies.

Several of the libraries have a day that they offer coffee, donuts, and conversation. They vary considerably. For one, it's mostly coffee and a newspaper without much conversation. The local library tends to have more discussion. The last time I attended one of these, there was a lot of discussions about local resources, a personal interest of mine.

On the trail, birdwatchers will talk to you anywhere, but most of the random conversations start around rest stations. People who are walking, jogging, or running for exercise won't want to stop and most of the others are trying to get somewhere.

Are there any local discussion groups in your area? If you find yourself looking for a job, services, or some other resource, they might be good places to connect and find out more about your community.

Does a local school, college or community center offer classes for students learning English (or some other language) as a second language. They may also have discussion groups that you can attend. If you are planning to travel, you might find students from that area that could give you some tips about etiquette, attractions, or food.

Posted by Wolf VanZandt at 1:26 PM