I grew up in the southeastern United States, the area known as the Bible Belt. There was no problem finding a church and, furthermore, if you had a definitive preference as to which denomination of Christianity you wanted to take part in, that church was there. In Selma, I was  a member (and still am) of the First Baptist Church at Lauderdale and Dallas (there were two First Baptist Churches - the other one was the first First Baptist Church in historical succession). On either side was an Episcopal and a Presbyterian church. Across the street was a Methodist church. Within a couple of blocks was a Catholic church.

The church was the center of community life. Local establishments closed on the weekend in reverence of the Lord's Day (Sunday). When evaluating the situation of people who were trying to find resources, my first two questions were, "Do you have family locally?" and "Are you a member of a church?" If both answers were "no," I knew that my job was going to be difficult.

There were nonChristians in the community and they were not outcasts (as they might have been 30 years earlier in my childhood). And WalMart and restaurants around town were open on Sunday. (People had to have a place to socialize after church!) But, generally, Sunday was for worship.

That was where I was throughout most of my life, except that I kept returning to Denver....somehow.

The first time, I visited a friend who was attending the gunsmith school on Colfax. The second time, I passed through Denver on the way back from a construction ministry trip to Great Falls, Montana. The third time, I traveled to Denver to be interviewed for a film on the Beast of Gevaudan. Then, I visited my Were family in Broomfield. It seemed natural that I would end up living in Denver.

In my earlier visits I noticed the general paucity of churches in the Denver area. In fact, I did not see a single church the first three visits to Denver. You could not go to Griffin, LaGrange, Valley, Auburn, or Selma without seeing churches. I also saw that Denver didn't close down on weekends.

After I moved to Denver, I began seeing the churches. They were not as salient a landmark on the countryside as in the southeast, but there were quite a few. Still, I missed the slowing of life on the weekends which provided a mark in the passage of time that I was very used to. And, of course, the church was no longer the center of the community. There was a very good chance that a randomly selected individual from the street was not, in fact, a Christian.

A problem I've met with in finding a local church home is that most of the churches in my area seem to be creedal. One of the tenants of the Baptist denomination is that the individual is responsible for what they will believe and that is between them and their God. It's called "the priesthood of the believer." In a creedal church, the congregation will occasionally stand up and recite their creed. ("Credo" means "I believe" and it is where we get words like "incredible" and "incredulous".) I cannot recite creeds I do not hold and I have always had interdenominational ministries which played down creeds. I am sola scriptura, so I could not hold a traditionalist creed, and I would have to tear the third chapter of John out of my Bible were I to accept a Calvinist creed. Most of the churches in my area seem to be either traditional or Calvinist. So I am still a member of a church in Selma, Alabama.

There are many churches along Bear Creek Trail (or, at least, close enough to drop off the trail to attend a service if you are of the mind). Most are some flavor of Christianity, but there is at least one Buddhist church that I have visited. I'll be talking about Buddhism in Denver in a later blog - there are a few other places I want to visit.

Churches do not just inspire religious interest. As I've said in earlier blogs, they are centerpieces of communities so watching churches can give insight into the workings of a local community. Also, they are obviously works of art. The variety of architecture is fascinating and the stain glass windows and furnishings are rich in symbolism. Despite the gargoyles on the bell tower of the Baptist church I attended in Selma, it was very appropriate for it's environment - the interior decorations featured leaves and acorns of the live oaks that abounded in the area.

Here are pictures of some of the churches along Bear Creek Trail. 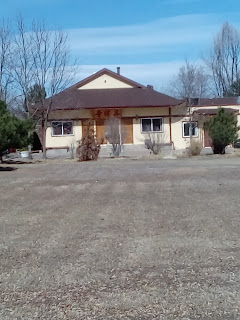 The Buddhist Association of Colorado 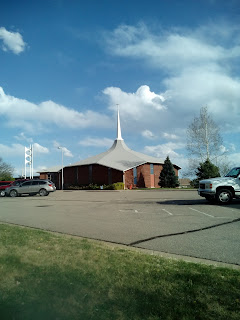 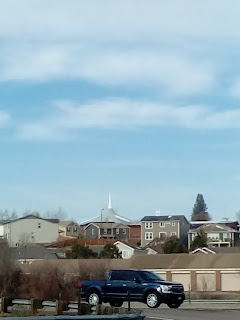 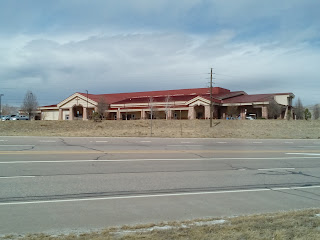 Are there many or few churches in your area?
Is there any way that they reflect the history or the atmosphere of their community?
Churches are often set aside as historical sites, such as the church that was close to where I lived in Fredericksburg, Virginia that was pocked with bullet holes from the Civil War. Are there any historic churches in your area? Are there any along your favorite trail?
Churches often display plaques memorializing particular people who have been important to their congregations in the past, but the plaques usually mean little to anyone from the outside. Try investigating one or more of these people. What kinds of people are important to church congregations?