My first light rail trek took me from Mineral Station at the extreme south end of the C and D lines on the Denver light rail system to Littleton Station, the next stop to the north.

My two "home stations", the ones closest to home, are the University Station, at Denver University, and Englewood Station, which is a couple of miles downhill. I can get on a bus in front of my house and ride to either, which I have begun doing because I find that I haven't recovered completely from my health problems of 2017, and I have begun focusing more on the hikes and less on testing my endurance. In this case, I walked a couple of blocks down the street and boarded a bus that would take me to Englewood Station.

This central hub is interesting in it's own right, being an exhibition site for the Denver Open Air Arts Museum and being located next to the Englewood Civic Center. Shopping centers and restaurants are close by. It also offers a breathtaking view of the Front Range including Mount Evans, Mount Morrison and Waterton Canyon far to the southwest. The light rail parallels the freight rails so, while I wait for my train, I can watch the big trains go by and admire the boxcar graffiti. 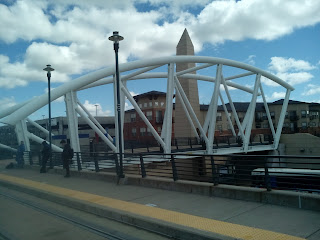 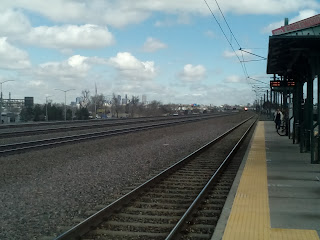 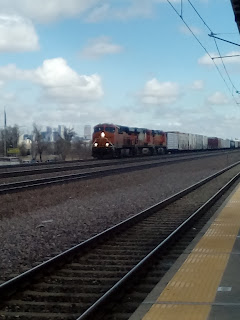 People don't usually talk on trains. I have found that to be a tautology across the country. But, if you encounter a group of effervescent young people, you can often enter the conversation. I was once listening to a group near Denver University, whose talk drifted to the mud around Denver and I inserted that most of it was volcanic, which bought me into a lively discussion of local geology.

This time, it was before noon and the train was lightly populated. I had gotten up early to find it snowing hard, but within the hour, the snow stopped and the sun came out and I was out of my sweater before I got to the train.

The light rail carries sleek, white "space age" trains (except when they are sporting rainbow advertisements). When I was a kid, trains still looked like the freight trains shown below and things that looked like these light rail electric trains were still futuristic and scify. And Denver takes some pains to make the stations aesthetically pleasing. The bridge below passes from Mineral Station over the Sante Fe/CanAm highway to the big park and ride lot, a Seven-Eleven convenience store, and Mary Carter Greenway, my destination. 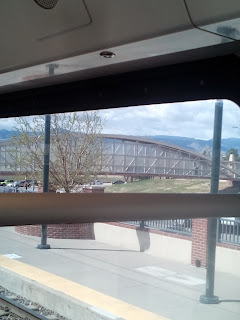 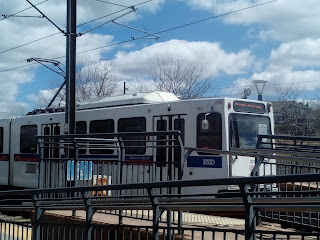 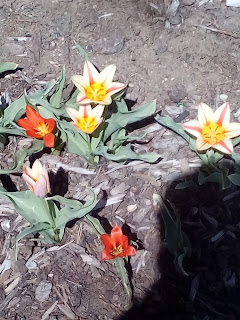 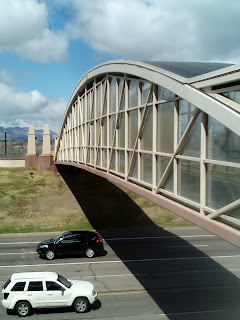 After a snack at the convenience store, I hit the trail. South Platte Park at this point has displays concerning the disastrous flood of 1965. I head north into the Carson Nature Center. It looks pretty much like other parts of the Mary Carter Greenway, which it is a part of. The biggest difference is that the people that administer the trail offers nature tours of the area - but not today - I'm just walking. The trail follows the South Platte River. It doesn't look very ferocious today. 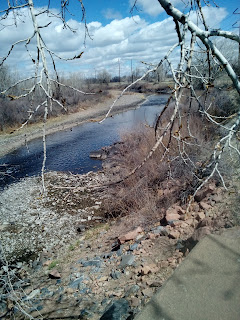 This is a favorite area for water fowl and there are many ducks on the river, including some little reddish brown ducks that I had not seen before and that would not let me get close enough for a good picture. This wasn't a technical hike, so I didn't have my telephoto equipment.

Birds in the Denver area are little jerks. They wait until I get my finger on the shutter release button and they fly.

In the Carson Nature Center, I did see the first nice colony of bryophytes that I've seen since I moved to the Denver area. I will have to go back when I start looking at plants - with my close-up lenses.

Cooley Lake and the other ponds of South Platte Park were reclaimed from an old mining project. 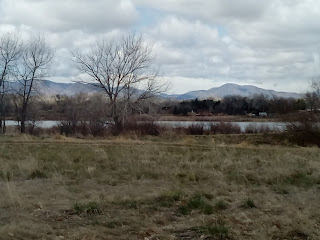 There are many water features, there as much for erosion control as for aesthetics, along the South Platte. 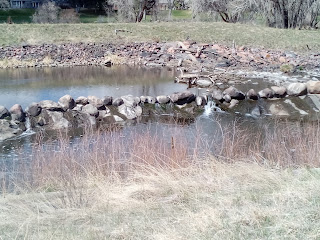 Around the Hudson Gardens area is a bridge across the river, a small grove garden commemorating influential community members, and a couple of small parks at streams that flow into the river. 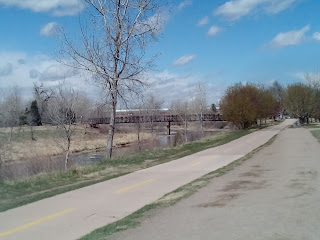 Hudson Gardens isn't much to look at yet. It's too cold to get the flowers out and the coffee shop that faces the rail wasn't open when I went by. In the winter, the gardens function more as an event center, featuring a surprising number of big name music groups. The gardens are open to the public, free of admission.

I was hoping to make it to Lucille's Cajun Bistro before they closed but missed it by a few minutes. The smell of biscuits was enticing, but I will have to wait.

Littleton is a picturesque little town. Downtown is laid out in a grid with the streets lined with trees and small shops. There are a few modernistic buildings but, over all, it reminds me of the small town America of my childhood. 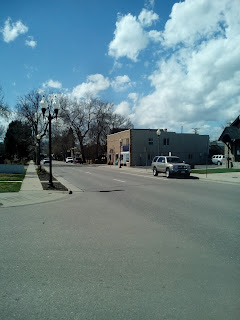 The train depot is a coffee shop. I had just eaten when I stopped in, thinking that it was a souvenir shop so I didn't buy anything, but it smelled great, so the next time, I will have to try out the coffee and pastries. 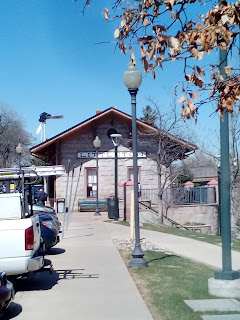 The actual light rail station is below ground level behind the depot. 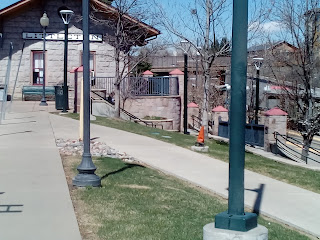 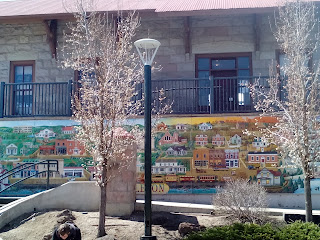 Denver likes murals and this one adorns the wall that runs along the train stop. It is a "primitive" representation of the town. Not intended as a term of disrespect, the mural reminds me of work by people like Henri Rousseau, Paul Gauguin, and the early Grandma Moses. This is quite different from the more modern styles at, say, Oxford station , just one stop to the north, or the outdoor art of Englewood Station. Oxford station also has tiles that display the works of school children - drawings about transportation.

A brief train ride, a longer wait for a bus and bus ride, and a short hike then brought me home again. It was quite warm for a day that started with snow.

If you've never taken a train ride, you should try it out. Do people behave differently on a train than on the street or in a bus? Do you feel differently about the people around you on a train?

If you travel on a train regularly, say, as a commuter to work, pay attention to the art and architecture along the railway. Are there common themes or styles?

Posted by Wolf VanZandt at 3:49 PM