I took the first E Line from University Station after 8:00 am, transferred to the W Line at Auraria West Station and pulled into Golden Station at 9:45. 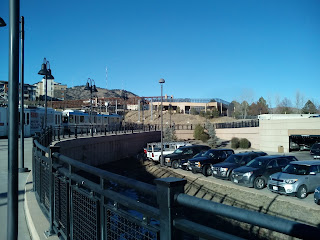 The W Line ends just at the eastern outskirts of Golden at Jeffco (Jefferson County) Government Center. There is a pedestrian bridge over Highway 6 to what looks like apartments and some shops called "Golden Ridge". My destination is the Chimney Gulch Trailhead, which I know to be about two miles west on the south side of the highway, but there is no pavement, so I stayed on the north side and took the 6th Avenue Trail into Golden.

The Jeffco Government Center is an impressive structure with a high central rotunda and grounds that are landscaped into gardens. 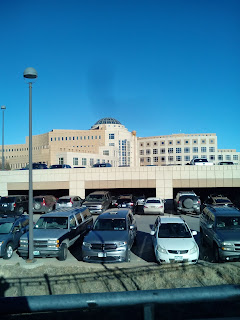 I didn't know how long my hike would take - it proved to be demanding - so I skipped the sightseeing and determined to turn around at 2:00 pm regardless of where I was. I didn't want to be struck on the mountain trail after dark. I will return to Golden when I start back the station-to-station hikes and this building will certainly be one stop.

The walk down through Golden is through parks including one devoted to geology and paleontology - Triceratops Trail - and I see several signs to museums and other points of interest. I'm sure I'll be coming back. 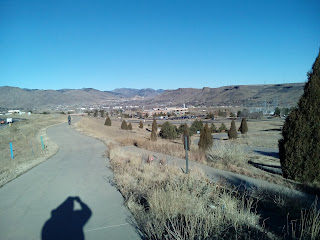 The North and South Table Mountains are fossil volcanoes that display vertical bluffs of basalt around their rims. 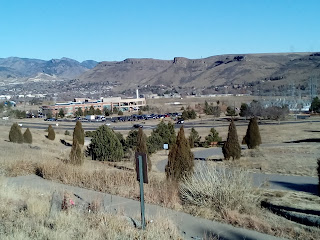 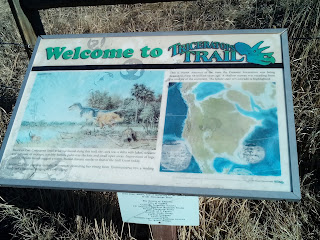 Golden advertises that it's "Where the West Lives" and here's the cowboy and horses to prove it. I did notice a rodeo grounds as the train neared Golden.

I'm not sure what that means, though. There are "Old West" looking buildings aplenty and I'm sure a goodly proportion of the museums are about the Old West, but the people seem pretty modern to me.

I was impressed with how friendly and outgoing the folks in Golden were. 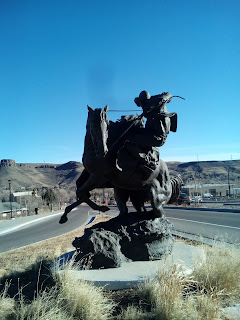 The statue is called "Checkmate"  and is located in a small park situated on a bridge where 19th Street crosses 6th Avenue.

The iconic "M" on the side of Mount Zion overlooking Golden - a friend once told me that it was where Buffalo Bill Cody was buried. He was wrong. I've also read that it stands for "Mountain" and is there to show Texans what a mountain looks like. Actually, it stands for "Mines' as in "School of Mines' which is a university located in Golden. In 2017, the School of Mines ranks 82nd in the U.S. News and World Report "Best National Universities" and was ranked by QS World University rankings as the top institution in the world for mineral and mining engineering. This school has recently turned it's sites on space as a "final frontier" for natural resources. 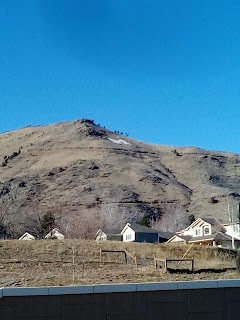 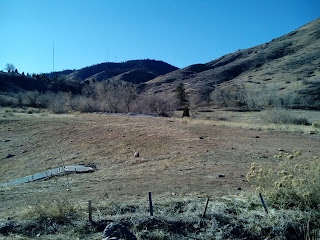 [Lookout Mountain from the parking area] 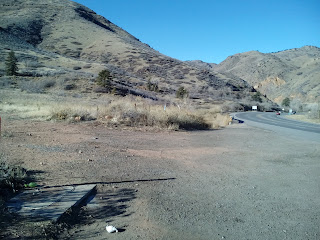 [Highway 6 along the flank of Mount Zion]

I was surprised to see this chunk of rose quartz on the trail. It was much rosier than it looks in the photograph. I left it where it was. 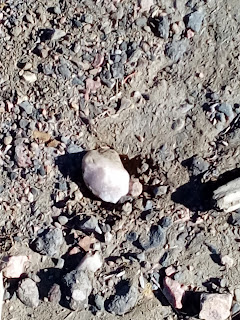 The environment along the lower part of the trail is foothills with grasses and straggly brush and many of the wildlife that I see around Mount Carbon. I didn't see deer but I spotted plenty of droppings. 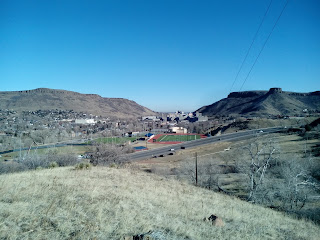 This trail is described as "difficult" and I would agree but not for any lack of maintenance. The trail is well kept. The difficulty has to do with it's steepness and. perhaps, traffic, although I chose to hike it early on a weekday and did not encounter much mountain bike traffic until later in the afternoon, and even then it was not bad.

All the hikers and biker were friendly, outgoing, and polite. I met three joggers headed up the trail ("Up" - I want to emphasize that word.) I was tired after the two mile hike from the railway station down to the trailhead. Jogging was not even in my range of possibilities. 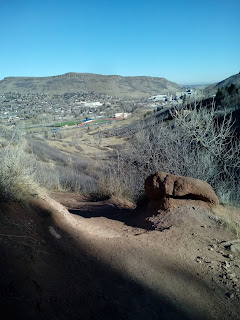 That's the Coors Brewery to the right.

Chimney Gulch actually is a gulch (in contrast to Harvard Gulch, for instance). It is, in fact, a V-shaped valley with steep walls. It was named for it's appearance after a forest fire ran through it. 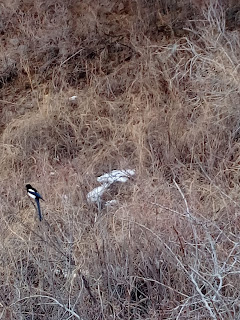 I have a hard time getting photos of birds. They will sit there until I get my finger on the "shutter release" button and will fly away. I asked this fellow if he minded if I took his picture and he sat there for a shot. I, of course, thanked him, and paid him $20 (just joking about the $20).

The trail crossed a dirt drive in one of the neighborhoods on the flank of Lookout Mountain and, at that altitude, Denver was in clear view. 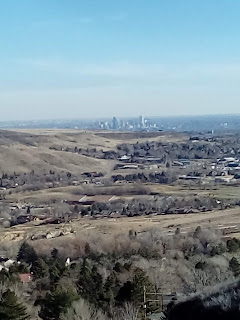 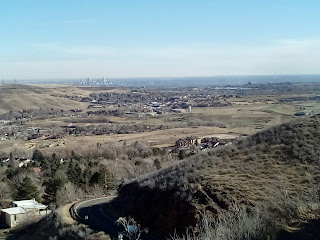 Golden is in a broad valley between Lookout Mountain, Mount Zion, and Galbraith Mountains to the south and the two Table Mountains to the north. The main stream is Clear Creek so I'm guessing that it's the culprit. It probably gets pretty uppity during the spring.

Further up the gulch, and not very far, there was still ice in the creeks and across the trail. 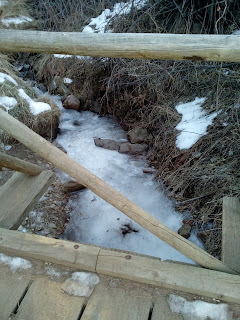 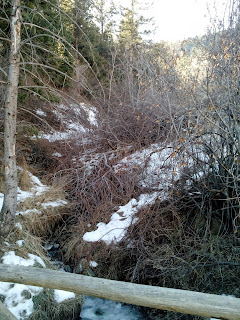 After a while, I crossed from the straggly plains environs into pinyon and Ponderosa pine forests and, here, I noticed that I was looking down on the tops of those two ancient volcanoes. 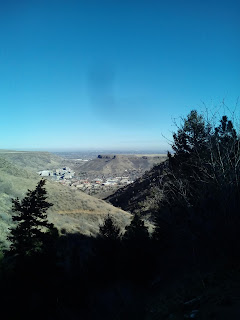 Unaccountably, my pictures of Windy Saddle didn't take. Maybe my phone froze.  I did get this picture of an engine cylinder head at the top on Lookout Mountain Trail. (?) 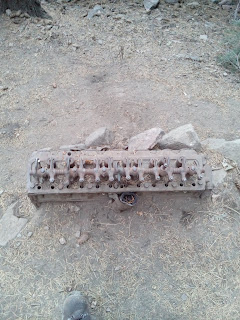 A saddle is a ridge between two mountains that divide two deep valleys. In mathematical terms, it's a hyperbolic paraboloid (I'm getting into mathematics next year so I had to throw that in.) This particular saddle is evidently a natural wind tunnel since winds blow there constantly at considerable velocity. The temperature dropped from 62.7 degrees Fahrenheit to 46.9, and I had to put my coat back on.

The forests turned to true montaine habitats and, suddenly, I was unmistakeably in the Rockies. There were lots of tiny finches and they would have nothing to do with my photography. They played "squirrel", staying just on the opposite sides of trees.

I considered continuing to the top of Lookout Mountain but, at 1:30 I thought that if I made it, I would want to look around and rest and I wouldn't be able to do much before 2:00, so I turned around and headed back down.

Did I mention that Golden is in a valley. Once I reached Highway 6 I still had two miles uphill to walk to the train station. The train was waiting for me. I sat down and sent my family a message: "I'm on the train. It's not moving. I don't care."

I don't know how high I hiked. I've seen estimates from 1000 feet to two thousand feet. I measured it at 1430 feet but my phone doesn't have an onboard barometer so the altimeter readings are less accurate. The contours on the Google topographic map places the trailhead at about 5800' and Windy Saddle at about 6900' giving an altitude gain of about 1100'. The summit of Lookout Mountain is at 7377', so, according to that, I ended up somewhere between 1100' and 1577' above the trailhead. 1430' sounds about right.

I've read that you can see seven states from Lookout Mountain....wait, that's the one in Tennessee. I've been there, too. If you're in the South, it's worth visiting. It has the only river that runs it's entire course on top of a mountain. That's what the ads say. It also has one of several deepest gorges east of the Mississippi River. And it's where Neil Gaiman set his final climactic confrontation  in American Gods.

There are two Lookout Mountains in California, one in Idaho, one in New Jersey, one in Oklahoma (there's a mountain in Oklahoma?), three in Oregon, and a Lookout Summit in Washington State. There are probably others. You should check out the one nearest you.

I didn't get to check out the eating places in Golden. I will certainly come back to that in the future.

There's a lot you can't see and experience unless you go there on your feet but a hike like this requires planning and a good constitution. Study the area before you go. What is the weather like? The difference of about a tenth of a mile on the Chimney Gulch trail dropped the temperature 15.8 degrees with a sudden wind that would suck the heat right out of you. Carry snacks and don't forget the water. Dehydration is a serious condition on a trail where there is no phone or Internet coverage. Watch your pace and don't overdo it.

Posted by Wolf VanZandt at 7:57 PM