They say that atmospheric pressure and temperature drops with increased altitude. The relationships are complex (See the Wikipedia article for Barometric Formula for the pressure equation) but we don't have to be exact here. Pressure drops about 11.3 pascals for the first 1000  feet above sea level. A pascal is a measure of pressure that is equal to one Newton of force over one square meter of area, or about 0.000145 pounds per square inch. A millibar is 100 pascals.

The weather meter is a SensorTech by Dakota Watch Company. I bought it several years ago from the National Geographic products catalog. Here's what it looks like. There are several ways that altitude can be measured. The only way I know that it can be measured with precision is by a couple of surveyors with expensive equipment physically hiking up the mountain. Smart phones can do a decent job. The most accurate phones use an onboard barometer that can compensate for temperature. My phone doesn't have a barometer but it will give me a reading by the less precise method of GPS. One global positioning satellite can give a pretty precise fix on a location by latitude and longitude (horizontal position on the globe), but to get an altitude for a point, there needs to be at least two satellites. The altitude is triangulated between the satellites (there's trigonometry involved). With all the calculating, some accuracy is lost, but I've compared my readings with altitude contours from topographic maps and they tend to be pretty accurate.

My altitude measure for the starting point of my hike was 5764' and it was just below the 5800' contour on Google's topographic map. Windy Gap was at 6941' and the Google topographic map showed it to be just above the 6900' contour.

Here's the data I recorded.

And here's a graph of pressure and temperature vs. altitude. 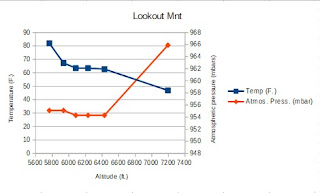 Actually, I noticed part of the problem while planning the hike. I wanted a day with stable weather because as weather systems move through, as you probably know from weather reports, barometric pressure changes. I didn't want the barometric pressure changing for anything but altitude. My meter was barely sensitive enough to register the difference between the bottom of Chimney Gulch Trail and the summit of Lookout Mountain as it is.

Imagine my chagrin when I noticed that, according to Dark Skies, the weather service I commonly use, there is a dip in the barometric pressure every day around noon! Why would that happen?

The weather station I was watching is on Colfax and I'm sure that street heats up as the sun rises. Hot air (think about a hot air balloon) is lighter than cold air. Golden is a smaller town but I expected some of the same effect. What happened? Here's a chart of the altitude, temperature, and pressure over time. 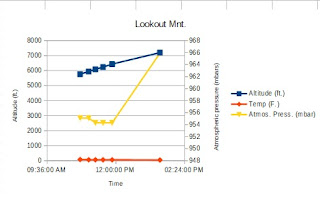 According to my calculations, my hike had an elevation gain of 1430 feet (for a travel record see the Terminus: Golden blog). That gives an average altitude gain of 8.6 feet per minute, or 513.8 feet per hour. I think my hike up Mount Cheaha in Alabama was steeper but it was only an elevation gain of 95 feet. The temperature curve is so flat I made a separate chart for it. 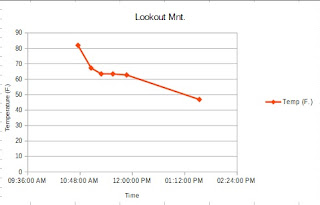 It certainly dropped as I went on. But how did these variables change with altitude? Well, there's the jaw dropper.

Well, of course, there's a reason. At 6951 feet, there is a natural wind tunnel called Windy Saddle that collects all the winds from one side of the range and blasts them through to the other side. You can probably guess that compressing air makes it denser and creates more pressure, and, also, that denser air is colder. Right here the temperature dropped from 62.7 degrees to a rather brutal 46.9. I had to put my coat back on!

Air is funny but it's very predictable. Things like the ideal gas laws that you might have learned in chemistry governs it's behavior and, therefore, forms a basis for the behavior of weather. Do you have a wind anomaly like Windy Saddle near where you live? If you visit, try to figure out how it works. Weather meters, thermometers, and pocket anemometers (wind meters) are fairly inexpensive and, perhaps you could record some measurements and make some charts. Feel free to show your results in the comment section of this blog.

Posted by Wolf VanZandt at 7:12 PM