Most of my life, I lived in a place (the southeast US) where snow was a rare commodity. Up to the 70s, we would get at least one good snow a year but things changed when I was in college. The snow went away and the armadillos and coyotes moved into Alabama. Now there are capybara in Georgia. Things change.

Now, a light dusting of snow in the southeast will shut everything down.

The year I moved to Colorado was the snowiest year since. When I left Selma, it started snowing on me just south of Birmingham and it snowed on me all the way to Broomfield and continued snowing until well into the spring months.

So I've had three good snow hikes in my life. I'm not counting the walks to work when I was a tutor in Broomfield or the many grocery runs in the snow. There was one SEHowl at Mount Cheaha in Alabama where a snow storm covered the area in March, followed by a tornado that blacked out Anniston and went on to hit Atlanta.

I learned to wear socks when I slept in cold weather. Being the host, I was the first person at the Howl and the only Howler the first night. I went to sleep listening to rain on my tent and woke up to a strangely dark morning. When I unzipped the tent fly, snow cascaded in. I also noticed that I couldn't feel my feet. I didn't even look at them. I put my clothes on and drove to the developed campground up the road. When I got to the showers I examined my feet and was relieved to find that I would not lose any toes.

After my morning ritual, I hiked up the mountain to the country store at the top.

I've also hiked twice to Mount Carbon in the snow. On the first hike, the snow had melted from the paved path and I still considered Mount Carbon to be a necessary evil that stood between me and Morrison. I've walked to Morrison several times and there's no way around the two hundred foot rise on the path. I either take the trail over Mount Carbon or I take the road over the shoulder of Green Mountain. Neither are very pleasant and I had always considered both to be rather ugly - until I tried the Mount Carbon Loop Trail.

This trail shows Mount Carbon at it's best, following a series of switchbacks along the flanks of the hill to the summit. On the way, it provides some spectacular vistas.

Earlier this year, I decided to hike to the top of Mount Carbon in the snow using the Loop Trail.  I've hiked in just about every kind of weather available where I have lived, but this was my first snow hike. I started around 8:00 on a 2 degree but sunny morning.My Neanderthal physiology kept me nice and warm with no more than my usual cold weather get-up - overalls, sweater, and leather jacket.

I found that my body had to adapt to the cycle of focusing on each step to avoid crashing to the ground. About half way to the end of the hike up, I no longer had to concentrate on my pace and could enjoy the scenery.

The hike up Mount Carbon was grueling. The trail is a ledge and doesn't provide much room for mistakes. A fall probably wouldn't kill me, but the scrubby brush blanketing the hill wouldn't be pleasant. Still the view was spectacular and well worth the work. 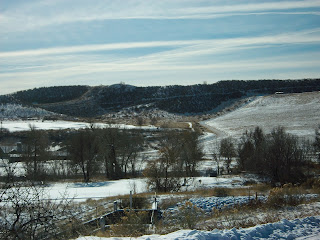 (Mount Carbon in the snow) 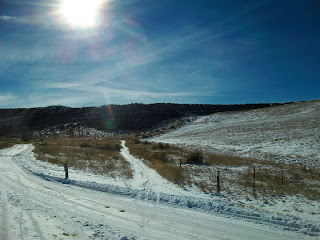 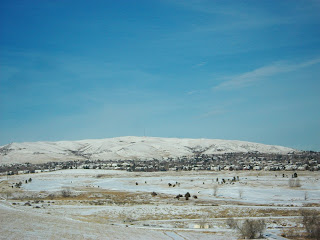 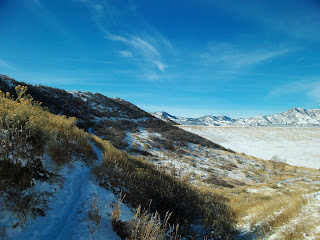 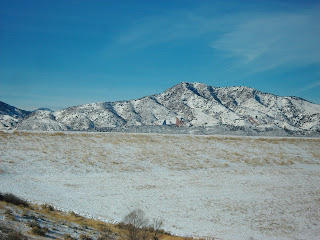 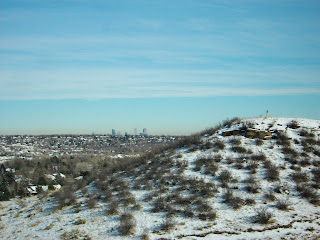 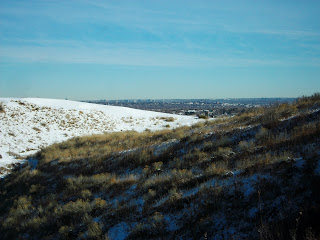 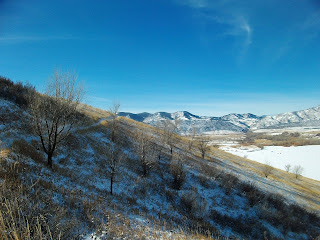 (Almost to the top)


I made the top ("Summit" would be an appropriate verb but it seems a little overblown for such a small prominence.) a little after noon. It was 27 degrees and I felt great. 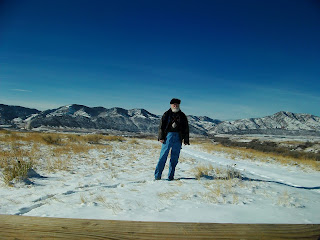 I gazed out at the Rockies and down at the tiny shelters of the ice fishers on Bear Creek Lake. 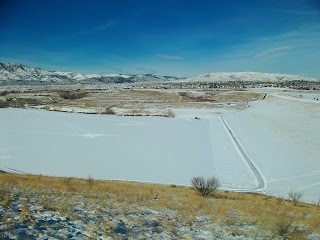 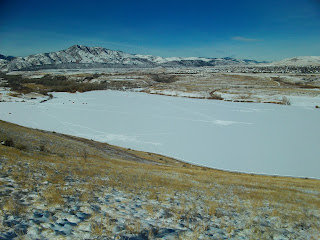 The really nice surprise came when I started down. Gravity did all the work. I felt like I was drifting down the side and the descent was quick and painless.

I made it back home before dark in great spirits. This was the hike where I tried out new methods to prevent the plantar blisters which had plagued my hikes all my life and the simple step of sticking duct tape on the balls of my feet did the trick.

By the way, you might have noticed that some of these posts are dated 2016. Those were written last year. I wanted to have a backlog built up so I could keep a fairly consistent stream of new posts appearing. Also, my adventures will be somewhat topical. The posts I wrote last year are general subjects - the blog, my geographical area, resources, and such. In 2017, I'll be looking at philosophy, psychology, parapsychology, and religion around Bear Creek and Denver.