Heat and temperature provide somewhat of a mental challenge to many people. They are different things and it's sorta difficult to wrap one's brain around what they actually are. In addition, they can refer to physically precise qualities, or to sensory experiences. If you say, "Wow! I'm hot!", it means that you feel hot - the opposite of cold. (But don't say, "Ich bin heiss!" in German unless you really mean it - that's something very different.) When a physicist says that something is hot, they have a very precise thing in mind.

Heat is the flow of energy from one place to another. If energy isn't moving, there is no heat. Temperature, on the other hand, is the amount of energy inside an object - it's the total amount of molecular motion in an object.

Heat is measured in units like BTU, calories, joules, or newtons. These are units of work. Work is the amount of energy expended when you move something from point A to point B. Well, everything is moving down to a point that there is no molecular motion at all and, on earth, it is very rare for there to be no motion.

Which brings me to temperature. Temperature is measured in degrees and measuring temperature is a bit more complicated than measuring length. To measure length, you just set a ruler along side the length your measuring and compare the lengths. You can't measure temperature directly. You have to measure the effects it has on things. The classical measurement is the mercury (or, since the demise of mercury thermometers, since mercury has been found to be poisonous, the alcohol) thermometer. Things usually expand when they get hotter (water is weird like that - it expands when it freezes) and you can measure temperature by the amount of expansion. Mercury and alcohol expand predictably when they warm up. Today, we have electronic thermometers that measure temperature by the effect it has on electronic components.

The rest of the world? Well, I have friends in Canada and I once was exclaiming about the brutal 25 degree temperatures at a camp out in northern Alabama. He wasn't impressed and I was confused until I realized that Canada, like most of the world, uses the Celsius (or centigrade) scale. You see, on the Fahrenheit scale, water freezes at 32 degrees. On the Celsius scale, it freezes at 0 degrees. That's the nice thing about the Celsius scale - water freezes at 0 degrees and it boils at 100 degrees (at sea level atmospheric pressure). Between and beyond, the scale is broken up into intervals of 10, 100, etc.

There is another important temperature scale and it's the one used by scientists because it has an absolute bottom. On the Kelvin (or absolute) temperature scale, 0 degrees is where all molecular motion stops. You can't go below zero on this scale (that isn't exactly true because there's still some atomic motion at 0 K, but for our use, let's say 0 K is the absolute bottom.) On the Kelvin scale, water freezes at 273.15 degrees Kelvin. To convert from Kelvin to Celsius, you just add 273.15 degrees.

A good way to grasp the difference between temperature and heat is to see them in action. Sometimes, when your camping out, take a paper cup (not a foam cup!), fill it with water, and set it in the fire. Don't worry, your fire will be safe. The cup will sit there with the water happily boiling away and the only part of the cup that will burn will be the part above the water. Once the water starts boiling, you will still be pumping heat into it (the heat will be increasing in the water) but it will not get any hotter (the temperature will not increase until the water has boiled away).

Last year, while walking on the Highline Canal in the summer, I noticed that my feet were getting uncomfortably hot, so this year I wondered just how hot the pavement actually gets.

There are three types of material used on the trail - a black paving, a white paving, and crushed granite. 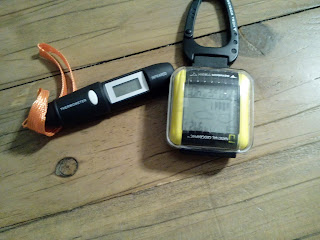 I use two types of thermometer on the trail. Glass thermometers break too easily so I avoid them. I have a weather instrument that I bought from the National Geographic products catalog which has served me well over the years. It's made and sold by the Dakota Watch Company and it's called the Sensor Technology Barometer Thermometer Hygrometer. It's a portable weather station and, as parts of it's duties, it will keep track of air temperatures. (and, yes, it's still available on line for around $40 from various vendors).

I also have an infrared thermometer that came in a child's science kit called ScienceWiz Heat and Temperature. This series of kits are designed by science popularizer Penny Norman Ph.D. and, although they are definitely for young children (the illustrations in the manuals are muy hokey) they are surprisingly deep and always have at least one really cool demonstration - in this case, an IR thermometer.

You see, if something is vibrating, it's giving off radiations. Molecular vibrations will give off radiation in the infrared and visual ranges of light. Small vibrations give off light in the infrared ranges and as a body gets hotter it glows red, then yellow, then blue or white. So you can measure the temperature of a substance by measuring the wavelength of the light it gives off. That's what an infrared thermometer does. It's very portable and easy to use (just one button).

So, when I started from home the air temperature was 74 degrees F. My comfort range is between 40 and 60 degrees so I expected it to become way too hot and I was not disappointed. When I got of the bus and onto the trail at 11:00, the air temperature had risen to 81.7 degrees and, according to the infrared thermometer, the trail was at 115.6 degrees. Surprisingly, the ground around the trail was hotter at 116.7 degrees. Here's a photograph of the pavement at this point and the ground around it. 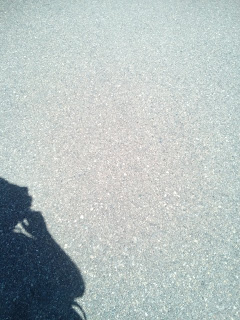 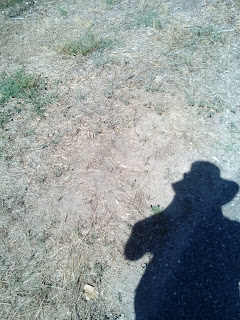 [Pavement and shoulder at the Iliff trailhead]

To give you an idea of what was going on, keep in mind that heat always(!) flows from hotter to cooler regions (you might wonder about air conditioning and refrigeration - heat has to be actively pumped out of an area in those cases and it's not just simply flowing. It takes work!) Body temperature is 98.2 degrees so, as cooler temperatures rise from cooler temperatures toward normal body temperature, heat flows slower and slower out of the body. As it gets hotter than 98.2 (or whatever your body temperature is at the moment), it becomes harder and harder for your body to get rid of the excess heat. One way it does that is through the evaporation of sweat. As a fluid evaporates, it has to take in heat and sweat is in contact with the skin so it sucks heat out of your skin, cooling you off. That's why sweat is dangerous in cold temperatures. Or even in very hot climates like Arizona in the summer. Hypothermia (too much cold) is very dangerous in Arizona when sweat (or pool water) suddenly dries off peoples' skin and draws too much heat out of their bodies.

Outhouses and Porto Potties on the trail can be sweltering in the summer because they convert sunlight to heat and trap the heat. The restroom at the South Quebec Way trailhead was at 91.9 degrees. I didn't stay in there very long.

Remember that shady bench from the last blog? Here it is again. 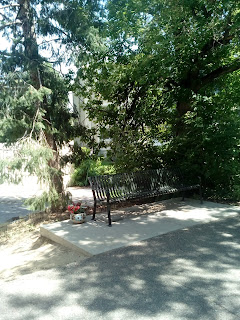 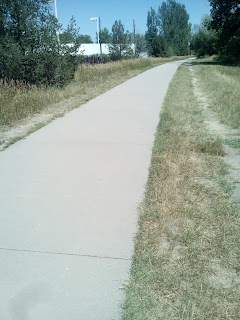 Colorado has dry air and humid, heavy air buffers changes - it resists changes because the air molecules are more closely packed and can't move as easily and they bump into the heavier water molecules. It can be felt!

In Alabama, water is being pumped into the near sea level atmosphere from the Gulf of Mexico and the air is usually much heavier (in terms of atmospheric pressure and water vapor content) than in Colorado. If you step out of the sun on a hot day into the shade, you will get a little relief because your body is no longer converting the direct sunlight into heat, but the air won't be any cooler and the pavement will take a long time to cool off. In Colorado, you get immediate and significant relief because the air can take more heat into itself and things cool off more quickly.

The conclusion to all this is that, from now on I plan to keep my summer hiking short, and, if possible, in the mountains where it's cooler.

Where you live, pay attention to how atmospheric conditions (especially humidity), color of pavement and clothes, air temperature, and how hot you feel relate. When you're swimming, how cold are you when you come out of the water?

Posted by Wolf VanZandt at 1:13 PM