The title references "News From Lake Wobegon", Lake Wobegon being the mythical town in Wisconsin popularized by Garrison Keillor in the radio show, Prairie Home Companion. In an episode where Keillor angsted about lying on a public broadcast, he intimated to his audience the surprising secret that, in fact, Wisconsin is also mythological.

And, on point all places are mythological. Denver is a myth. If you live in the east, you may think that you know that Denver is a large city in the Rocky Mountains. The truth is that Denver is situated on the plains and the land around it is relatively flat. To the east, all the way to the Mississippi River, the ground slopes gently away. Yes, there are only 27 mountain summits east of the Mississippi River that are above Denver's elevation and the highest is only 1402 feet higher (Mount Mitchell in North Carolina reaches 6684 feet), but Denver is flat land.

Another myth I had to disabuse myself of when I moved to Denver was that Denver is cool year round. I don't understand why I am so intolerant of heat. I was born in Southern Florida and grew up in Georgia and Alabama, not cool climates, but temperatures above 90 degrees hurt me. About three months out of the year here torment me.

Furries....do you know what a furry is? If you have watched documentaries on the furry community, you probably don't. The documentaries are all hype and sensationalism. But, if you live in Denver, you should. I've never seen a city with so large a furry population. You can't drive through town without spotting several vehicles with Colorado Furry stickers.

One of my housemates was hosting a panel at the annual Denfur Furry Convention last weekend and I bought a ticket to provide support (I operated the video camera.) There is a considerable overlap between the furry and therian communities and the panel was there to explain therianthropy to the furries in attendance. I'm also a therian, so I had other reasons to be there.

But I'm not a furry and tend to boredom at other peoples' conventions. Furry is basically a hobby - a fandom, not a lot different from, say, a convention of model railroad enthusiasts. There are some differences, but they aren't huge and, except for the furry suits and lack of model trains, they are not that obvious to the onlooker. Furries like anthropomorphic art. An anthropomorphic animal is a nonhuman that stands on two legs, talks, and wears clothes like a human. They used to be called funny animals. And they like dressing up as anthropomorphic animals. Many of the costumed mascots for sports teams and theme parks are, in fact, furries.

I have attended one other furry con, the Memphit Fur Meet at Olive Branch, Mississippi, near Memphis, Tennessee. I did not stay at the hotel. Instead, I camped at Mississippi's Wall Doxie State Park in the northern part of the state. It is one of the most beautiful state parks I have visited, situated in a cypress and pine forest surrounding an incredibly blue lake. 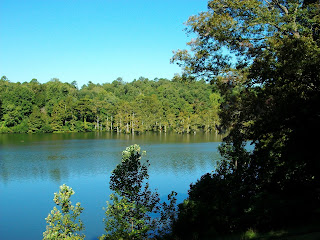 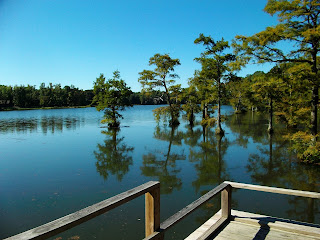 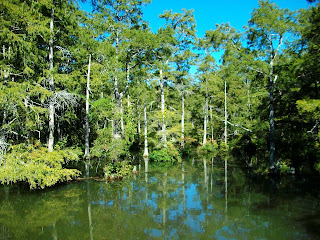 I went to the conference, again, to take part in a therian panel. I also wanted to see some friends who had stopped coming to the annual campout I hosted. That was while I lived in Selma, Alabama, before I had to take an early retirement. I enjoyed hanging out with friends, but three days there was too long and I spent most of the time wandering the grounds of the hotel. I planned to volunteer in later years but life intervened. Within a year, I knew that I would be moving soon.

After close to two hours of bus travel to the Crowne Plaza Hotel in Aurora, and after checking in at the registration desk, my first order of business was to find a restroom. Then, I went to see the art show.

Many furries have an exquisite sense for art, not just visual art, but also music, athletics, and acting. A person dressed as a wolf was at the lobby piano pounding out a very decent Rhapsody in Blue.

Appreciating the art took about ten minutes and I met my housemate, who is quite accomplished and in demand for setting up art displays. After exchanging greetings with a couple other familiar therians, I headed to the restaurant for a light lunch.

The Prosciutto Margherita Flatbread was very tasty and hit the right spot.

When I finished eating, it was about a half hour to the panel so I went there and waited. About a dozen people attended the panel of three presenters.

Instead of taking the two hour bus ride back home, I spent a couple hours with my housemate and two out-of-town therians, mostly in the vendors room. There were a lot of vendors this year, a sign of a healthy con. This is the second Denfur and it was well attended.

It was also well managed, with Safety Wolf threading through the crowds making sure everyone was well hydrated and not too alcoholized. Two of my companions obtained approved status and one got an unapproved ribbon, of which he was very proud. I think he might have drunk more than Safety Wolf approved. I'm quite uncomfortable in crowds and was being invisible. There was also a big black wolf with a leaf blower keeping the fursuited furries cool.

Kids love costumed mascots, so there were crowds of them milling about the furries. Everyone seemed to be having a good day. I left the con with my three companions and headed back home for a meal. They hung out with the House for awhile before going back to the hotel for one last day of Denfur.

Both the furry and therian communities are fairly new and offer sociologist the opportunity to observe the inception and growth of societies.

Since furries are so prevalent here and there are so many horrible misrepresentations in the media, perhaps you will be interested in finding out who they really are. The International Anthropomorphic Research Project collects data on the community and you can find all kinds of information on their site at https://furscience.com