The Highline Canal Trail is like a highway for pedestrians.

That sounds too much like a metaphor. Let me drop the "like". The Highline Canal Trail is a highway for pedestrians. If you're hiking or biking and you want to get from A to B, then the Highline might be your friend, along with the many other urban trails that intersect it.

Pedestrianism has it's advantages and disadvantages. It's not for the lazy. It's usually slow (barring heavy traffic on the roads)) and takes considerably more effort than driving. It's not going to take you any great distance unless you're going to get into backpacking in a big way.

On the other hand, it's cheap and doesn't rely on fossil fuels. And you get a bonus. All that exercise your doctor prescribes? It's built in.

Exercise. This 17 mile stretch of the Highline pretty much convinced me that I'm getting too old for the 30 mile day hikes I used to do. 20 seems to be my new limit....at least when temperatures rise above 70 degrees.

I joined the Highline Canal Trail near Dry Creek Road in Littleton. There are several access points in the area. 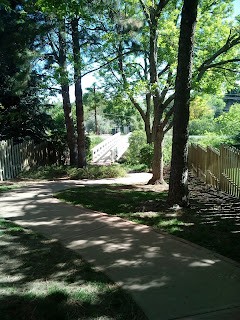 [Approach to the Highline Canal]

In following the "highline" contour of the area, the canal has to navigate many roads and natural streams by passing over or under. Here is one of the aqueducts over Dry Creek. It's definitely not a Roman aqueduct but it has it's charm in a Currier and Ives way. 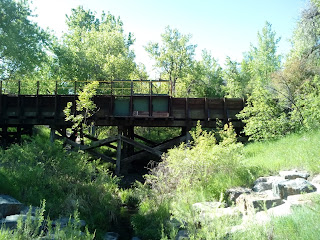 As an early 20th century work of engineering, it's certainly interesting.

The canal and it's accompanying trail meanders through a wide variety of scenery, including urban shopping areas. 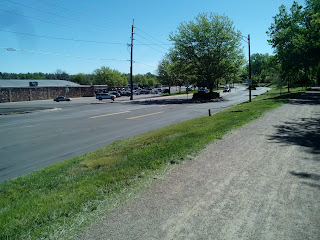 And just to show that I actually did begin near milepost 20, here's milepost 21. 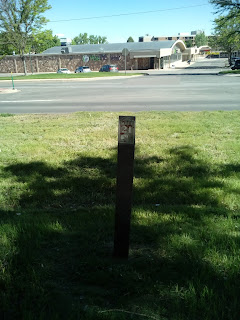 Although I was hoping spring wildflowers would be out for the hike (and there was some as I will show), the predominant color was green. 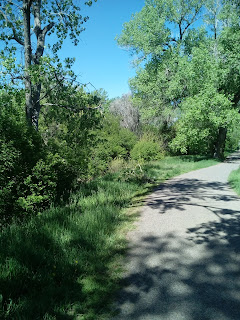 One of the many walkers I met early on the trail described the trail as "bone dry". As this photo shows, that isn't exactly right. Denver Water allows water to flow along the canal occasionally, but even when it's not flowing, snow melt and rain will produce ponds along the way. 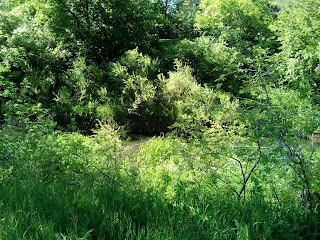 [Pond on the canal]

There are quite a few vistas of the Rockies along the canal, such as this view of snow capped Mount Evans. 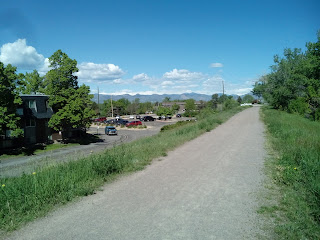 One wildflower I encountered was this small white ground cover. I couldn't quite narrow it down but the five petalled flowers and lacy leaves reminded me of an anemone. A good site for wildflower identification in Colorado is Wildflowers of Colorado (http://www.wildflowersofcolorado.com/index.html), which let's you search by flower color and provides lots of photos. 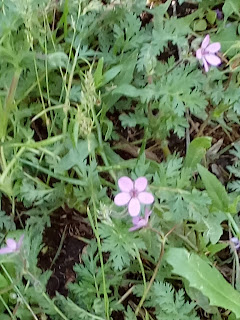 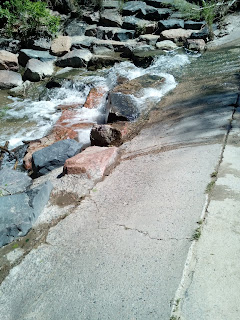 There are places where the canal really is "bone dry" and you can see the stream bed and how the canal is constructed. Through most of it's length, the Highline flows across natural earth. 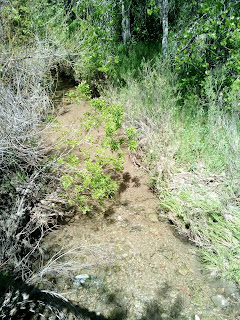 Where there is water, the many foot bridges across the canal provide picturesque scenery. 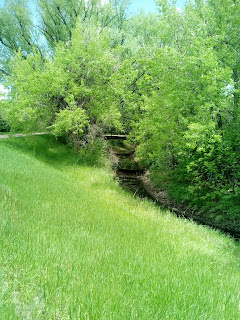 I left the trail where it crossed University (the first time) and walked up to Cherry Hills Marketplace for lunch at the Original Pancake House. The food was good and reconnection with the trail was easy. I just followed Orchard Road back down to where it intersected the Highline Canal.

In places honeysuckle splashed that banks of the canal with white, pink, and rose. 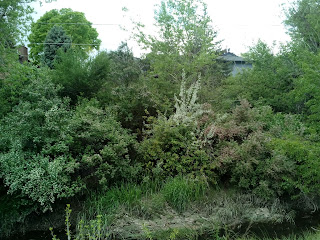 These are different honeysuckle than the ones I'm familiar with down South. Those are vines....these are bushes.

I'm especially fond of succulents and cactuses. Their blossoms tend to be extremely varied, intricate, and colorful. Euphorbia is one of the common varieties in this area. It's also called "spurge" There are many species but this green flowered kind is the only kind I've seen locally. 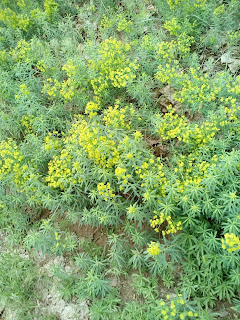 These little guys are called Cowboy's Delight or Copper Mallow. They're tiny but the orange blossoms sorta grab you. 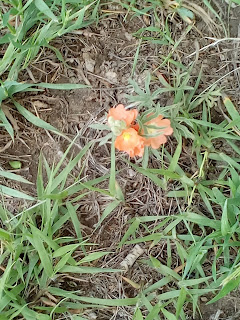 The orange color on this tree trunk is pretty but it is probably a disease called Cytospora Canker. 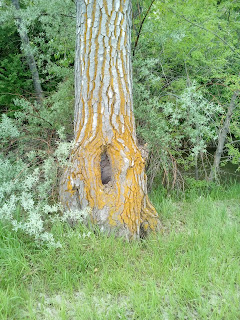 And this is only the third snake I've seen since I moved to Colorado, all garter snakes (I miss snakes). 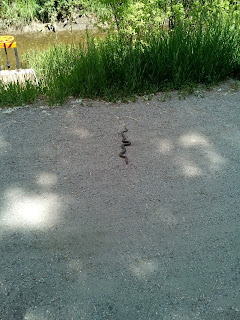 I've hiked the last 7 miles of this stretch of the Highline before. You can see the backyards of some very large homes here. The structures in Cherry Hills Village tend toward the impressive, ornate and large.

By the time I got to Hampden, my feet were blistered, I was tired, and  it was verging on heat-prostration-weather for me, so, after walking down to University, I was ready to hop a bus for the last half mile.

Poetically, spring is the time that nature revives from it's long winter sleep. Actually, nature never sleeps, it's just harder to see what's going on in the winter. But spring is a great time for people who are interested in birds, other wildlife, or flowers. What's happening outside in your area?