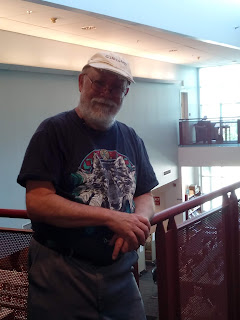 The personal photo that I've been using is about 15 years old. I had hair then and it was dark, so, in the spirit of truth in labeling, I figured I'd retire it.

I was at Auburn University 10 years (if you ignore the other 10 years that I worked to pay my way). I obtained two minors in World Literature. That means I have had several courses in various humanities - history, government, literature. It's rather disturbing how much got by me about how important first civilizations were in the development of Western Civilization (read that "European History").

For instance, I never picked up how important the people of the steppes were to Europe from the Roman period (B.C.) to the fall of the Mongol Empire in the Middle Ages. Except for a couple of small glitches in history, Europe (and America) would be Mongol today.

I am still learning a lot of surprising facts about Native American culture and how important they were in the growth of the United States and Canada and how the totally disreputable behavior of the Federal government was often completely at odds with the will of the American people. Some things, I guess, remain constant.

Much of my new knowledge comes from, where? the library, of course. Suddenly, I'm finding all these Teaching Company courses on Eastern civilization, the people of the Eastern European and Asian steppes, Native American cultures, and serendipitously, lectures at the library about these cultures. Once a month Active Minds presents an excellent lecture on some subject - I always hear things I didn't already know and there's always a tie in to current events. Last month was Lewis and Clark. Before that it was Buddhism.

I can see some study on Australian Aboriginal culture in my future. 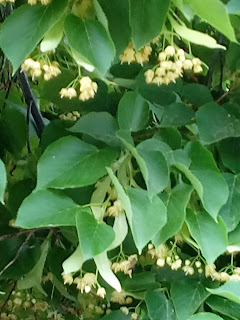 We didn't have these in the part of Alabama that I come from, although there was a small town named "Linden" just south of me. The name had little to do with the tree, though. It was originally called "Screamersville" because the animals were noisy at night. Later the name was changed to commemorate the Hohenlinden family, who were some of the early settlers in the area. The name was later shortened to "Linden". Place names are interesting. This tree, though - bees love it and it smells great and it fires off all kinds of allergies.

Does your local library have educational programs for adults? You might want to check them out.

Active Minds (http://www.activeminds.com/index.html) is a Denver based organization that offers lifelong learning experiences for elders and adults, but I see that they're also in Florida. Maybe there's something similar in your area. If not, perhaps something could be started. Active Minds would be a good model to build from.

Posted by Wolf VanZandt at 3:09 PM