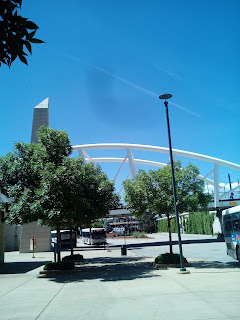 [Englewood station from the bus gates]

Englewood Station is a good place for a "home station". It is quite interesting in it's own right and it has all the amenities. The Englewood Community Center is part of the complex, with it's city offices, the Englewood Library, and the headquarters and museum of the Open Air Arts Museum, which is scattered all over Denver. A short walk brings a hiker to three shopping centers and several banks, and the shopping area along Broadway. There is a WalMart and my favorite restaurant in Denver, the Beirut Grill.

It was a hot day when I took a bus down Yale Avenue to Englewood Station. The big spire in the picture above is not only a piece of art, it houses the elevator from the plaza at the Civic Center to the bridge across to the light rail station. 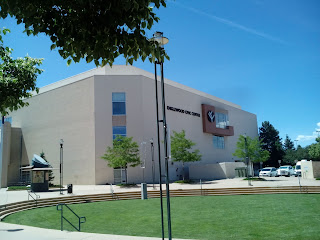 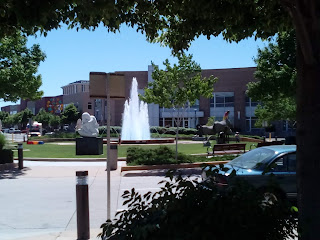 The fountain is constructed to allow a lot of personal wetness. Geysers of cool water erupt from the lawn around it and a hot summer day, of course, draws crowds of children in swimming attire. I was tempted, but was dressed completely inappropriately for fountain activities. Instead, I stopped into the Civic Center for a restroom and some water. There, I looked at some of the exhibits including Cherrelyn, the horse trolley (and the horse), and Museum of Outdoor Arts (and it's bear). If you ever visit Denver, you will notice that Bear is a major motif around town. 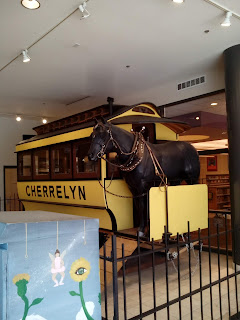 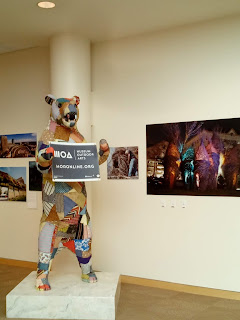 The starting point for my hike was just one station down from Englewood. Here are more of the tiles decorated by children at Oxford Station. 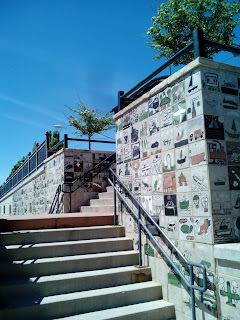 I am told that the art across town and the ornate rail stations and highways are fairly recent. 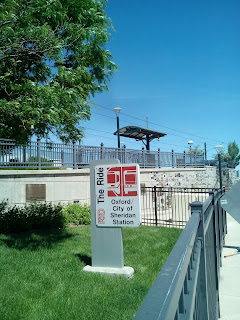 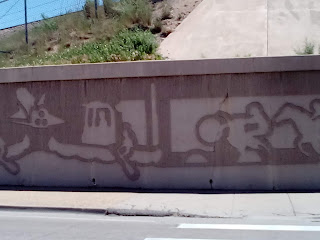 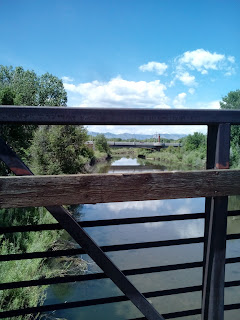 [Mountains from bridge over the South Platte]

We've been here before. It's the bridge over the South Platte River where the Mary Carter Greenway/Platte River Trail and Bear Creek Trail meet. You can see from the mountains frames in the bridge's railing that, regardless of the heat on the high plains, Mount Evans still has a lot of snow. At 14,271 feet, it's still pretty cool up there.

I wandered over to the Steak and Shake to buy a much needed milkshake and then I came back to the Greenway to begin my hike. I found these two waders, perhaps little blue herons, on a sandbar in the river. This area is a good place for spotting water fowl. 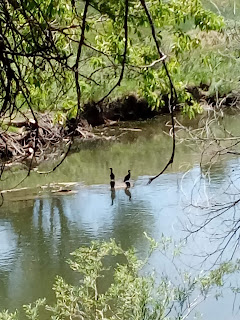 A little ways on I noticed this patch of sturdy grass, which I have been unable to identify (anybody out there have an idea?). 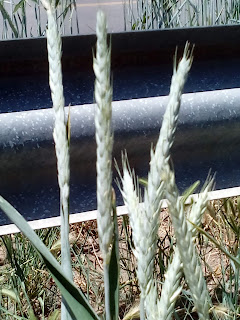 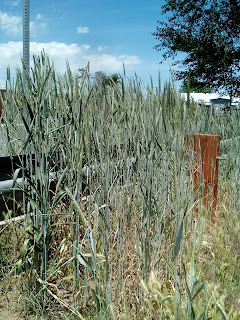 At the point where Dartmouth crosses the South Platte, it has absorbed Big and Little Dry Creeks (Little Dry Creek merges right here at Dartmouth in Englewood.), Bear Creek, and several smaller tributaries and is becoming a respectable river. 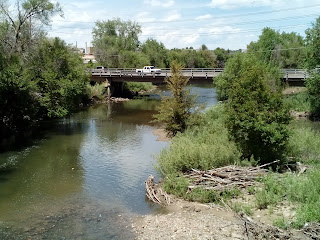 Several of the old train depots have been preserved in the area. Englewood takes the arch shaped facade design of its depot as an emblem. It reminds me of the Spanish architecture of the Catholic missions. Some of the depots, like the Littleton depot are still at the tracks, but for others like this one, the tracks have moved away. Now, it is the front for a community garden. 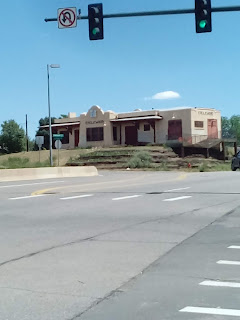 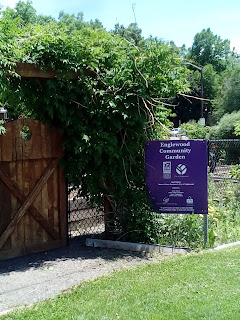 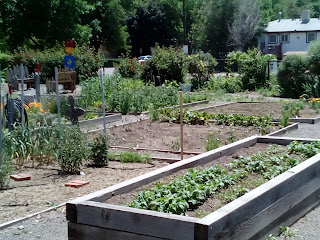 Since the columbine is the Colorado state flower, I had to take a picture of these nice specimens. 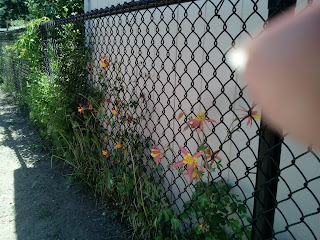 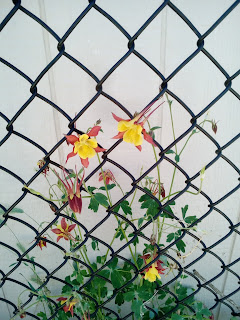 Back at Englewood station, I walked up to my favorite Denver restaurant, the Beirut Grill, for lunch. On the way back to catch the bus for home, I spotted the Englewood Trolley that ferries passengers at no charge between 19 stops among the businesses near the Englewood City Center. 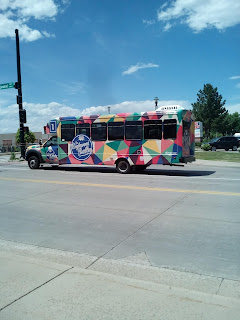 The area around the city center is an open air art museum with an entrance to the east guarded by these two durpy looking dogs. (Actually, they're sculptures of Greek Temple dogs. evidently, if you made trouble in a Greek temple, you would be licked to death.) 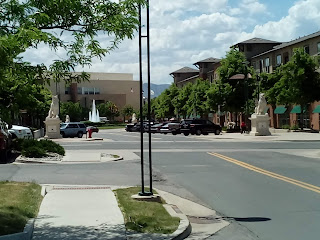 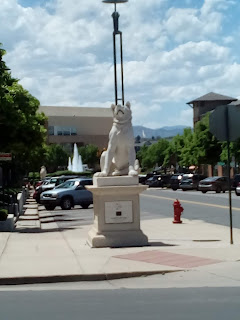 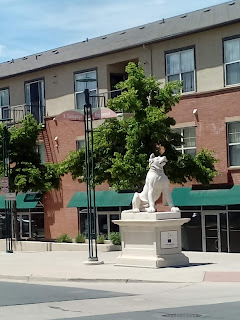 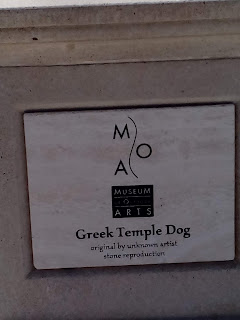 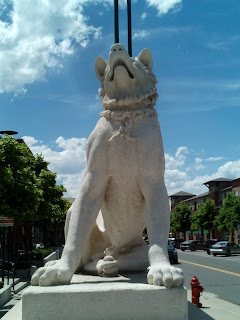 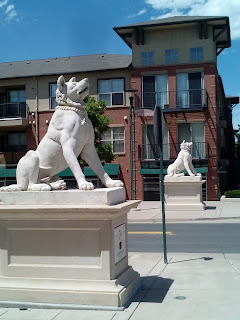 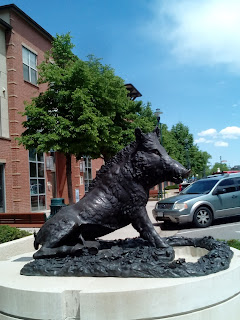 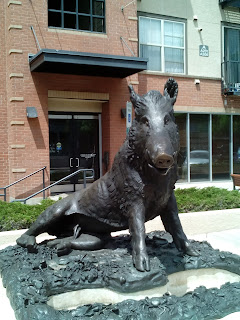 At the other end of the street, these two sage and weary looking lions keep watch. 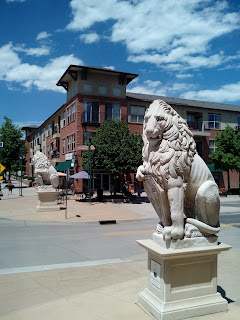 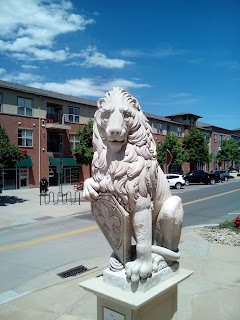 And my last stop on the hike was the bus stop beneath the obelisk and arch bridge. 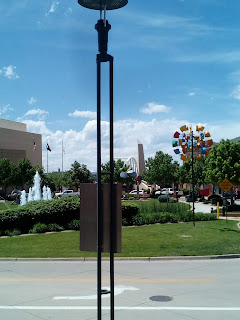 Not every town has such an extensive open air art exhibit as Denver, but just about every town has statues. There's a bole weevil statue in Enterprise, Alabama, and a chicken statue in Gainesville, Georgia. Selma, Alabama had a lot of statuary including some that caused constant controversy like the statue of Nathan Bedford Forrest (namesake of Forrest Gump and the first leader of the Ku Klux Klan) and the less infamous gargoyles on the First Baptist Church at Lauderdale and Dallas. What statues does your town have and what's their back stories?

Folks rarely give grasses, even the ornamental grasses in gardens, a second glance but, if you look closely, you will find intricate patterns in their blooms and seed heads.

If you have streams in your area, check out the areas where streams merge - the confluences. They are often favorite areas for water fowl and other wildlife - why do you think that would be? What's different about stream confluences?

Posted by Wolf VanZandt at 1:48 PM