It's one of those things that alternately amuses and disgusts me. Most of the historical thinkers of the world have fairly consistently assumed that humanity is the pinnacle of creation in all ways. Aristotle distinguished humanity as the rational animal (implying that other animals are not rational). Descartes described nonhumans as automatons. Skinner carried the idea further by saying that, not only were nonhumans automatons, but even humans responded to the environment in simple and mechanical ways. Since the inception of experimental science in the 16th century until the 20th century, it seems that no one ever thought to question the assumption. Still, even scientists are divided on how nonhumans compare with humans in their ability to think, reason, emote, feel, or fear.

Of course, I'm talking about the academic world. People who spend enough time with nonhumans to observe them find it difficult to see them as unthinking, unfeeling automatons.

But I guess it's comforting to think that your own species excels all others in every way. That would add to the list of isms - we call it "speciesism" and the rising movement of antispeciesism is the reactionary movement. I'm not sure whether it is a bigger surprise that thinking persons took so long to question the assumption, or that anybody ever thought of questioning it at all.

I guess the biggest blow came when scientists found that prairie dogs could communicate complex messages using a vocal language (Conn Slobodchkoff, William Briggs, Patricia Dennis. (May 2009) "Decoding the information contained in the alarm calls of Gunnison prairie dogs". The Journal of the Acoustical Society of America. 125(4):2739). Aye. Prairie dogs talk to each other. They tell each other to watch out for that thing moving around, what it is (if they know, otherwise, that they don't know), whether anyone should be afraid of it, and so on.

Crows develop grudges against humans that do bad things to them and they make sure that all the other crows in the area know all about it. For more on the languages of smart birds see John Marzluff's and Tony Angell's Gifts of the Crow: How Perception, Emotion, and Thought Allow Smart Birds to Behave Like Humans.

Anyway, I decided to walk to Mount Carbon and see how human and nonhuman companions connect. I expected the observations to be difficult. It's not always easy to see if two people are connecting - if they are being aware of their companion, and if they are not connecting now, does that mean that they never connect? Dogs, and all my subjects were human-dog couples (I didn't see any horses or other nonhuman companions, nor did I spot any birdwatchers watching birds this time.) often look like they are not paying any attention at all to their human companions, except that they are pacing their companion quite precisely. And even if couples usually connect, they might not if, for instance, they are juveniles or if they are distracted by a conversation.

And it was no surprise that I got no meaningful data. But I did count the dog traffic on the approximately five miles between Bear Creek Valley Shopping Center and Mount Carbon over about seven hours and the number was 42.

Most of the homes in this area have human and nonhuman occupants.

People here like their animal companions and, just watching them, it's quite obvious that humans and nonhumans do connect. They "talk" to each other, hike and play together, make eye contact often and, if you ask them, most will tell you that they "know" what each other "means". Of course, if you ask the dogs, horses, prairie dogs, or crows, you're going to have to understand their language to know what they answer. 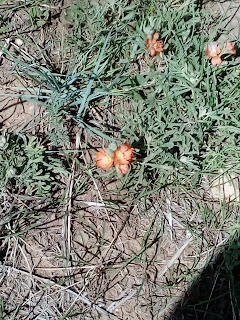 A pretty flower I spotted on Mount Carbon - I think it's a California Poppy.
Posted by Wolf VanZandt at 6:57 PM