People tend to look for patterns in nature, even when the patterns aren't there, but some patterns actually are there, and for a variety of reasons.

You probably have heard that traffic tends to bunch up on highways and that has to do with traffic flow dynamics. I would be very surprised if there were not a social component there too - a feeling of safety in numbers. I would not think so if my roommate in college were not quite so into trucker culture and CB ("Citizen Band radio" for those of you that do not remember it). Truckers would form "convoys" of trucks and the ones on the inside were said to be "in the rocking chair" because they did not usually have to worry about being stopped for speeding - the trucks on the leading and trailing ends would be the ones to be puller over. So, clustering and shifting positions reduce the chances of being noticed by the police.

About three years after I moved to South Denver, I began meeting people in my neighborhood and on the trails. It was like a switch flipped. Before then I hardly knew anyone and, suddenly, I was meeting people. I don't know how it happened but I would suspect that it took that long for people to see me enough times to feel like I looked familiar. I became a fixture in the community and people felt okay about approaching me and introducing themselves.

I strapped my camp chair to my backpack and strapped my backpack to my shoulder and started out at 8:30 Saturday morning, 5/6/17, to the library, where they were holding a couple of video sets for me. Then I tracked down to Bear Creek Park and set up in the shade of a big fur tree. There was a big cottonwood tree that I spent the first half hour sketching, and then I called my long-time friend and hiking companion, Paul, and talked with him the rest of the two hours. Otherwise, I counted foot and bicycle traffic on Bear Creek Trail from 9:30 to 11:30.

266 walkers and bicyclists passed by me in 195 groups. There were 145 people that were not in groups. With the other 121 in groups, there doesn't seem to be a predominance of groups, the larger the groups, the fewer groups that size. Here is a crosstabulation of walkers and bikers vs. different sized groups. 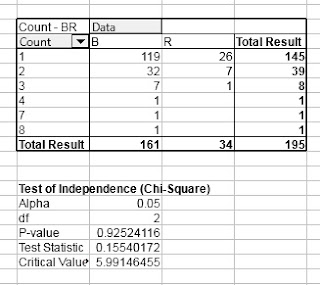 The large p-value (0.92) indicates that there is very likely no real difference in preference for traveling as an individual or in groups between bikers (B) or pedestrians (R). There were three large groups (more than four people in a group) of bikers but none of walkers. That's not very significant in a sample of 266 people. I've run into large groups of walkers - this time, I was just in the wrong place at the wrong time.

If you look at the sizes of groups over the two hours, couples appear fairly consistent. Larger groups appear early and late. I would imagine that the bike groups would start early to allow for more distance, and also to take advantage of cooler temperatures. Still, there isn't enough instances to tell if the pattern shown here is typical. 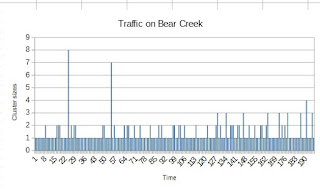 The number of trail users in each fifteen minutes is pretty consistent, which seems to indicate that trail users do not necessarily prefer the cooler morning hours over the warmer hours. 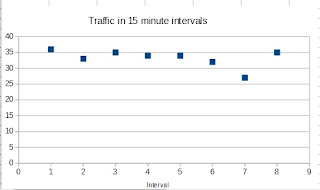 It had climbed from 60 degrees to over 70 and the park smelled distinctly herbal as I pulled my setup together, packed it onto my back, and left for home.

Posted by Wolf VanZandt at 7:48 PM