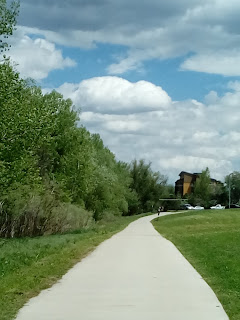 You may have noticed that yawning is contagious. If you yawn in a crowded room, you'll set off a chain reaction that will have people yawning all over the place. Great fun! Right?

Try it with your dog. I'd bet that you can get him or her to yawn.

Other things also tend to be contagious like coughing or clearing your throat. I was on a crew boat one hot summer day headed out on the Gulf of Mexico toward my work as a welder helper on a pipeline barge. The boat was way over capacity. The air conditioner was overloaded and the sea was choppy. Most of us were seasoned salts and it wasn't too bad until one greenhorn lost his lunch and then it was all over. Everybody had to join in. Sea spray or not, I headed for the door. Vomiting is definitely contagious!

But is smiling contagious? I found this suggestion for a study on the Science Buddies website. This is a website devoted to helping student develop plans for science fair projects, but it's a goldmine of suggestions for amateur scientists and lifelong learners looking for ideas. This particular idea can be found at:

So I headed out for the trail. One direction I would nod at passersby with a neutral expression and record their reactions. On the way back, I would smile and see if they smiled back.

The first leg was tough. I almost always smile at people on the trail. It's pretty much automatic. I only sampled people who were actually using the trail. A 1 indicated a person who made eye contact and who displayed a "growing smile". Many people were smiling when they met me and their smile didn't change, so I only recorded people who smiled on making eye contact or whose smile got bigger. The others got a 0.

So, it seems that smiles are contagious. But there are other important questions. For instance, is the contagion autonomic (hard wired, like yawns) or social. My observations suggest that returning smiles is mostly social, like the phenomenon of reflected posture. When two people are interacting strongly, they will often adopt mirror images of each other's body posture. I noticed that people I met on both legs of the hike often gave contradictory results. They smiled on the first leg and didn't on the second. It looked like fatigue distracted them. I would guess that an autonomic reaction would have occurred anyway. 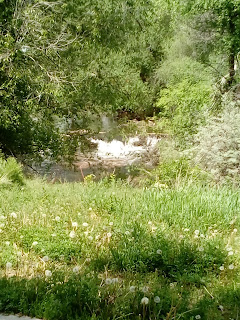 Rapids on Bear Creek
Posted by Wolf VanZandt at 3:41 PM