That's what endurance hikes are about.

In the early days of computers, when they were huge assemblages of vacuum tubes, the U.S. security system ran two systems in parallel. If one went down the other came up. If one needed maintenance, the other was on line.

The way they kept them running was by doing scheduled stress tests. They would shoot a high voltage through one of the systems and any vacuum tube getting ready to fail would blow out and, then, the technicians would replace all the blown out tube.

Not that I'm looking to metaphorically blow out any tubes, but the physical, mental, emotional, and spiritual stresses that I expose myself to allow me to recognize any "weak spots". If my hip starts aching, I look for ways to change my gait so that it stops and I incorporate that into my regular hiking gait.

Much of my learning isn't conscious. Many think that we learn only with our brains. I suppose that, since most of our communication equipment is concentrated in our heads, there's a temptation to think that the "real us" resides in our heads. That's quite wrong. We live, think, and learn in our bodies. A lot of data processing goes on outside our brains - in our spinal cord, various nerve bundles called "plexuses" throughout our bodies, and even in individual nerve cells. When organisms invade our bodies, chemical changes happen that allow us to recognize the invaders and deal with them, After that, we "have their number" and we keep it - be become immune to the specific organism.

When I moved to Denver, my body had to adapt to the lower humidity and oxygen lean air. It has learned to conserve water and more efficiently take oxygen from the air around me.

When I began my job offshore as a welder helper, I went two weeks unable to grasp things. I had to hold a drinking glass with two hands. The heavy buffing and grinding tools I had to use really worked on my hands.

I did develop muscles in my arms, but mostly, my body, quite unconsciously, learned economies of motion that allowed me to handle my tools without overburdening myself.

So I decided to walk out to Waterton Canyon as my 2017 endurance hike. I'm glad I pulled the date back to January 26, because I noticed that Denver Water, who manages the canyon, was planning to close the lands during the week starting early February for some months.

I was still working out glitches in my use of duct tape to prevent plantar blisters and a hike a couple of days before had left me with blisters along the tops of my big and little toes. Those are not nearly as debilitating as the plantar blisters used to be, but I still needed to work on it. The tape would literally pull strips of skin off my foot at the edges.

So I planned to wake up at 4:00 the morning of January 26, get ready, and walk down to the local Steak and Shake for breakfast before hitting the trail. I also decided to take the train most of the way down to the canyon - to Mineral Station. I wanted to spend most of the day in the canyon and maybe take in some of the Colorado Trail at the top before walking the South Platte River Trail back. Forecasts looked great - cold and a little overcast. 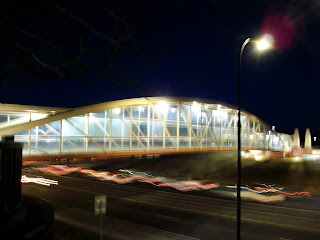 Mineral Station was quite a lot further from the Canyon that I expected. In fact, it was a 14.5 kilometer (9 mile) hike. Chatfield State Park is bigger than Bear Creek Lakes park and much more grueling. Once you get over Mount Carbon in Bear Creek Lake Park, the rest of the trail is easy, Chatfield is all up and down. And Chatfield Dam is a 147 foot rise that you have to address. 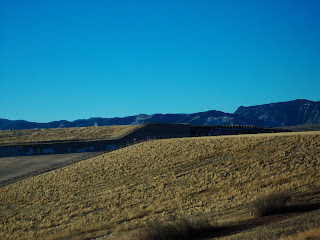 I was pretty well worn down before I reached the canyon so I decided not to hike the whole thing and I only took about a third of the trail. It was till spectacular and well worth the pain. I walked about 3 kilometers (1.9 miles) into the canyon, up to the Highline Canal diversion dam. Here are some pictures. 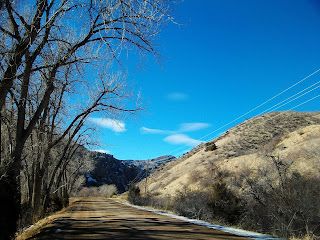 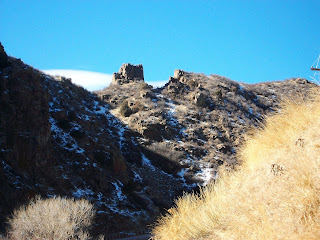 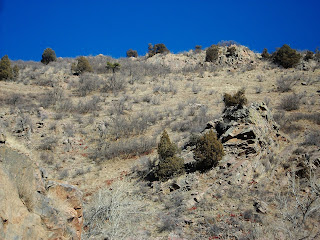 Denver was built on the banks of the South Platte River and it is the major waterway. Also, the HIghline Canal zigzags all over the Denver region. A National Landmark Trail, the Highline was completed in 1883 as an irrigation canal. Today, the major use is the trail that parallels the waterway.

Both the river and the canal run out of the Rockies through Waterton Canyon. The canal is feed by the river at a diversion dam before running through a tunnel in the mountain to the other side, then there are feedpipes that catch other waters in the canyon and run them into the canal. 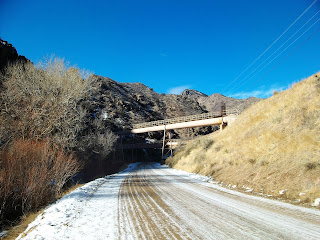 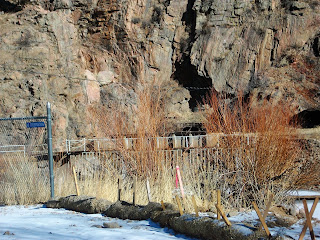 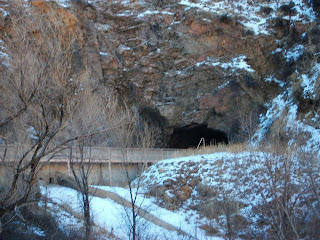 (pictures of the Highline)

I was already exhausted and in pain when I turned around and headed out of the canyon - another 22.5 kilometers (14 miles) and a train ride back home. And what did I get out of it?

Well, Waterton Canyon was spectacular and it was the first time I had seen bighorn sheep. Through it all, the bane of my hiking life was gone - no plantar blisters! I had figured out how to keep the duct tape that was wrapped aound the balls of my feet preventing the plantar blisters from literally ripping off strips of flesh from the sides of my feet. I had placed bandaids under the tape at the base of my big and little toes. The toe bandages on all my big and little toes kept them safe from how my boots broke over my toes somy busted left foot came through the ordeal very well. I managed my knee and hip joints and spine with precision. I had to focus on my pacing and breathing, especially during the trip back. On the 45 kilometer (28 mile) hike, I fine tuned my body and learned just about everything I needed to know about how to keep going after most of my reserves had expired. I think it was worth it all.

But, that said, this was probably my last endurance hike. I want to shift my focus to the rest of the world, the one outside myself, so I will be doing more technical hikes in he future, but many of those will be as grueling as the endurance hikes.
Posted by Wolf VanZandt at 6:36 PM