I'm not going to recommend the Wheat Ridge/Ward Road Station for tourism. The G Line that services the station is rather unspectacular with the exception of the Arvada Olde Town Station that looks like a nice place for shoppers that like quaint little villages. It has that feel. But my target was the terminus in northwestern Wheat Ridge, the only RTD light rail station in Wheat Ridge.

The G Line runs through a corridor of industrial zones and the Wheat Ridge/Ward Station is no different. It is surrounded by industry, but it does have some interesting points.

The station itself has parking for 290 cars and is a clean, attractive site. It isn't far from the foothills of the Rockies and especially offers some nice views of North Table Mountain. I was tempted to hike on over to the mountain but I'm not as familiar with that area as I am some parts of the Denver Metro area and I might have been disappointed by the real distance (as contrasted with the apparent distance) and lack of access to the mountain. Anyway, I am planning to visit the mountain in a couple of years when I look at the geology of the area. 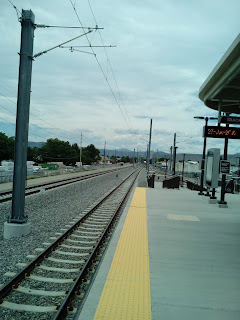 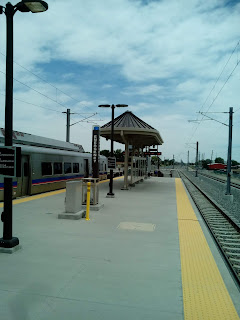 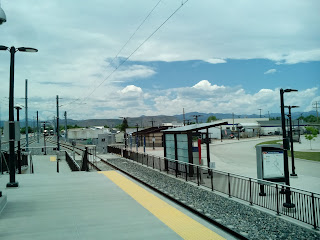 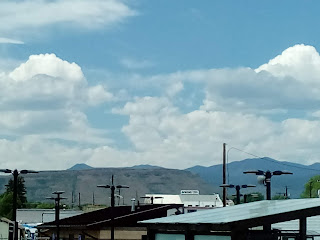 [Photos of Wheat Ridge/Ward Station and the Rocky Mountains beyond]

One thing that I like about Colorado is the variety of showy wildflowers here. In the Southeast, most of the nice indigenous plants were woodland flowers and one had to do some hiking to see them. Here, any vacant lot may be a home to some pretty plants. One common plant with showy flowers is the thistle. Colorado has 15 native species and 5 non-native species, loved by bees and butterflies, browsing wildlife and wildflower enthusiasts. The one I found in the grassy burm of the light rail station is (I think) a nodding thistle (or musk thistle), considered a non-native, noxious weed. 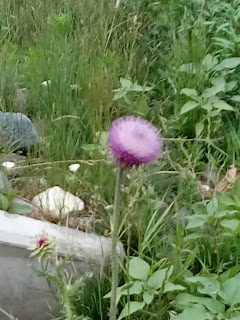 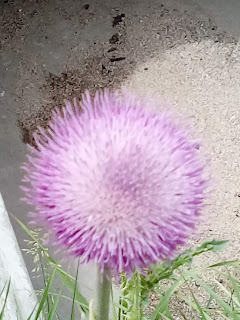 As much as Denver is associated with the mountains, it's still a plains city and the great variety of grassland grasses are represented here. This foxtail barley is pretty common in the area. We have lots of it in our back yard. 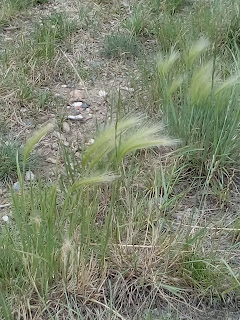 The stations of the RTD are micro-museums. Many of them display narratives of their neighborhoods. At Wheat Ridge/Ward Road you can read about the relationship between Denver and the mountains....and gold. G, in the G Line stands for "gold". The windscreens at the stations on the G Line tells the story of gold.

The artwork at Wheat Ridge/Ward Station is a modernist sculpture called "Anchored by Place". It was created by artist and art educator Michael Clapper. 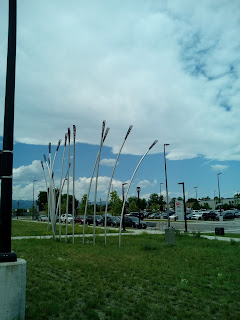 You can read a lot about the stations of the RTD light rail, their art, including the windscreens, and stories connected to the stations and their neighborhoods at the FastTrack website, http://www.rtd-fastracks.com/main_1 .

If you follow me in my adventures and want to check out any of these places, you can prepare by going to the FasTrack site.

After wandering around the station, I walked down to Ward Road and a convenience store where I picked up a snack and then returned to wait for a train for my trip back home.

Along the way, I noticed this clump of a favorite wildflower, milk weed. Despite it's name, it's a gorgeous flower. Monarch butterflies will only lay their eggs on this plant. Check out the Fish and Wildlife website (https://medium.com/usfws/spreading-milkweed-not-myths-5df8c480912d ) to clear up misconceptions about this valuable plant. 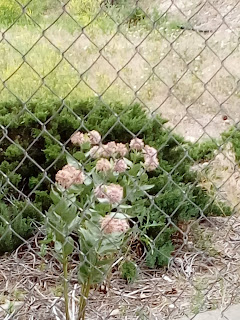 Ward Road has some nice views of North Table Mountain. The two Table Mountains are the exposed innards of an ancient but dead volcano. Their volcanic origin is made quite clear by the basalt deposits around the crown. Basalt is a dark, fine grain rock that is formed close to the earth's surface. It hardens too quickly for the melted magma to form large crystals like granite. These unearthed bones of dead volcanoes are sometimes called "fossil volcanoes". Luckily, they're as volcanic as the Denver area gets. 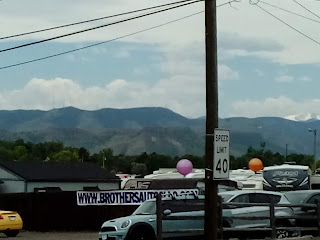 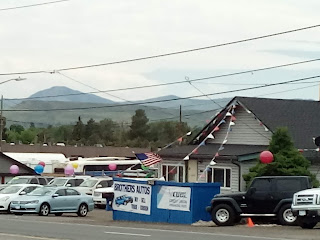 Regardless of how boring any area looks, if you look a little closer, you can usually find fascinating facts right in front of you.