A circuit around California and Stroud Streets from 15th Street to 19th Street in Downtown Denver forms the terminus of several of the light rails  - F, H, D, and L. A hike around the circuit is short but there's a lot there. I wasn't that interested in food or shopping but there is plenty of that. 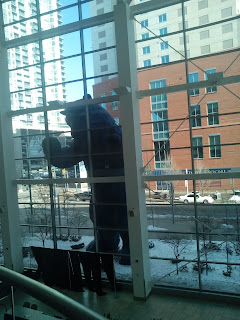 The Convention Center is near the south end of 16th Street Mall, the southern end of old Denver, and the Civic Center Park. Denver is really a fairly small city. I would not attempt a hike across downtown Atlanta in a day but it would be easy  to start at the Convention Center, walk down 16th Street Mall and see the capital and other government buildings at Civic Center Park, return to California Street to complete the circuit around Stout back to 16th Street, and then take the 16th Street Mall Flyer bus to Union Center, look round there and Commons Park, then walk back down to the Conference Center in a day. For those that like city life, that would be a good day trip. 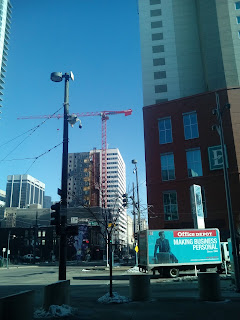 [Denver from the Conference Center] 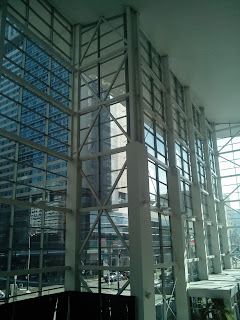 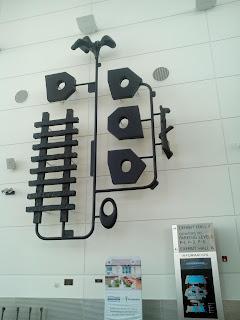 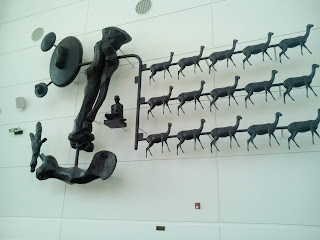 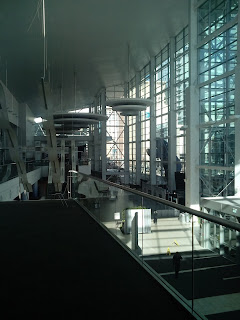 There was a garden show opening in a couple of hours, but I didn't want to wait around so I started up California Street. 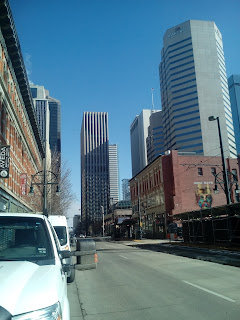 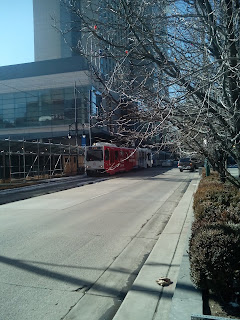 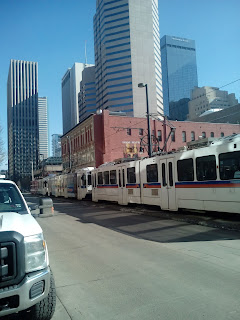 [California Street and the light rail]

The Colorado Information Center is just down the street on the right (north side of the street). They have a gift shop where you can buy, among other things, replicas of the blue bear (not quite as big as the original) for less than $30 - two sizes, even. The staff is friendly and informative.

The buildings along the circuit are a mixture of old and new. The old tends toward ornate. 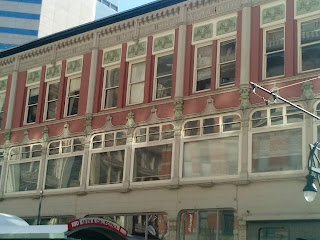 Older buildings in Denver often affect a Greek Classical style. If a wall doesn't need columns, columns are suggested anyway with the use of ornate pilasters.

An interesting assemblage of buildings, the Holy Ghost Catholic Church literally rests under a cantilever projection of a skyscraper. Beautiful as a combination of new glass and old stone, there is also a humor here. I say "old" but the church building was dedicated in 1924 with less than a third of is original plan completed. The present building displays the largest collection of colocreme travertine in the United States, over 300 tons of decorative stone. 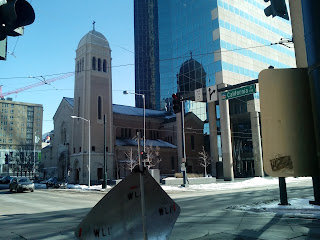 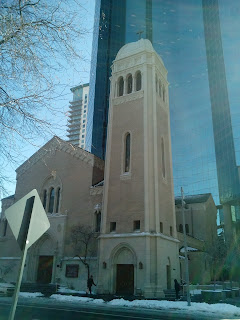 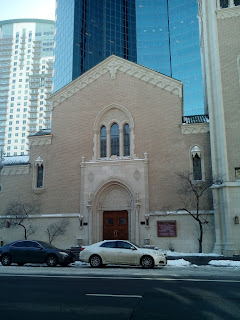 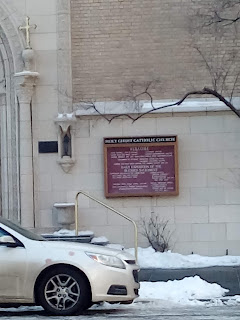 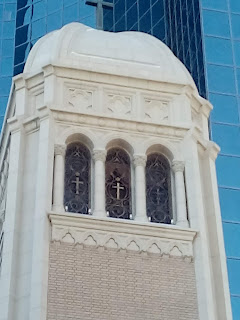 The Federal Custom House at California and 19th Street has an impressive portal. There's a lot of brass in Denver. 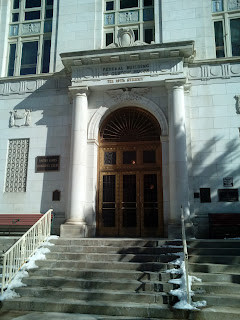 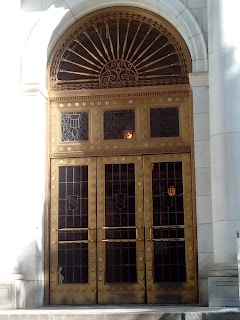 This is where I turned down 19th Street to follow the light rail over to Stout Street. At 19th and Stout is a collection of buildings, old and new, that house the Federal 10th Circuit Court. The new building to the east is an ornamented block of concrete. 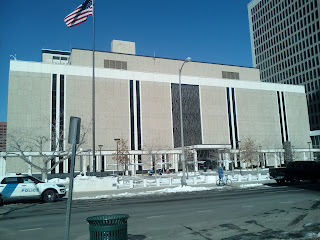 These buildings were names for Byron Raymond White (1917 - 2002) the first Coloradan to serve on the United States Supreme Court.

Across 19th Street is the old building, a classical style building of the same Yule marble that adorns the state Capitol, the Lincoln Memorial, and the Tomb of the Unknown Soldier. Consistent with Denver's love of monumental architecture, the front of the courthouse has a porch with 16 (count 'em) columns. The side walls don't need columns, so they have pilasters to be consistent.

The inside is similarly spectacular with barrel vault ceilings in the lobby and Federal District Courtroom and richly paneled ceilings in other rooms. Being a federal courthouse photography isn't allowed, but you can visit and be wowed. They also have an informative brochure in the lobby. 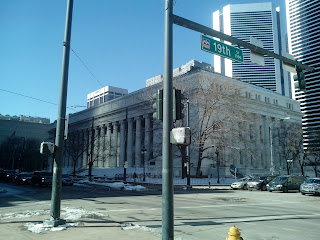 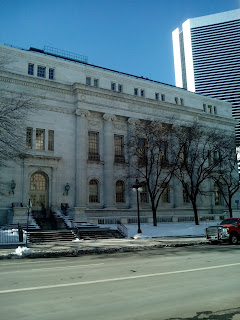 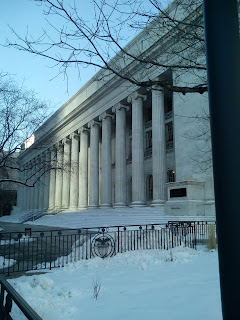 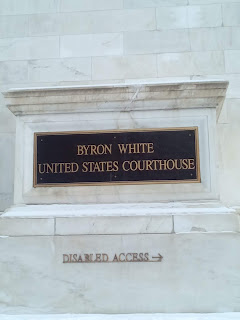 The west side of the courthouse is adorned by these two bighorn sheep. The sheep were the work of Denver sculptor, Gladys Caldwell Fisher. Their official names are "Rocky Mountain Sheep" and "White Ram". 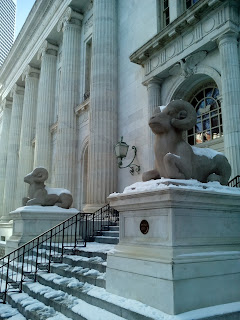 Across 18th Street from the Byron White Courthouse is the Ghost Building. You can look at the outside but you can't go in - it's very posted. 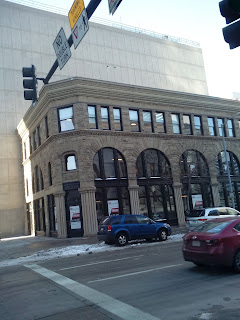 It was named after Allen M. Ghost, who was a real estate tycoon. The 1700 stone blocks were moved to the current location in 1985.

Almost back at the Convention Center, I spied another purple building, this one the La Boheme Gentlemans' Cabaret. Again featuring ornate pilasters, it is, as they say, a strip club. I see on the Internet that they consistently get good reviews. 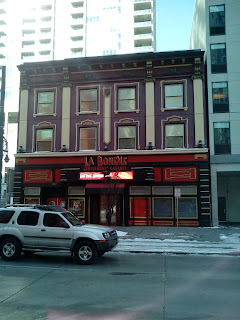 After the train ride back to University Station, I walked across campus to home, stopping along the way to take a few pictures of the construction being done on the west side of the Driscoll Building. This is scheduled to be finished next fall. 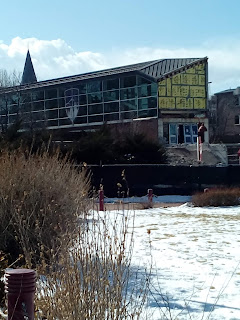 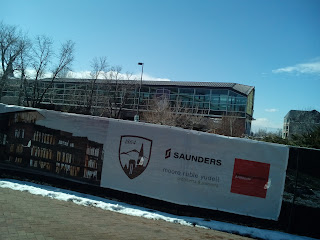 Some cities favor a monumental style, others like small town American aesthetic. How would you describe downtown in your city? Have many of the buildings been relocated? A lot of Selma, Alabama, where I used to live, was originally in Cahaba, Alabama but was moved upriver because of flooding.

Posted by Wolf VanZandt at 8:45 PM