Just looking at the websites of the colleges and universities in the area, it's hard to see any real focus in their mathematics departments. They seem to have a broad range of interests. I think I see a strong leaning toward discrete mathematics (combinatorial mathematics, graph theory, fields that deal specifically with whole numbers) and theoretical math at the Denver University. There are a few faculty members that share my interests in educational mathematics and statistical tools.

Statistics seems to be a big topic in the Colorado School of Mines. They make their areas of research more explicit on their website. There seems to be a lot going on with wave phenomenon, spatial statistics, computational math and analysis, and mathematical biology. For a school that focuses on applied technology, those topics don't surprise me much.

I walked up to the Denver University campus last Friday to sit in on a presentation and subsequent reception. It was a nice day and I got some nice pictures of the school of mathematics and science, which is spread across several buildings along Illif Avenue.

The water garden nearest the Newman Center, one of three on campus, is named Dan's Garden after Daniel Ritchie, a major donor to the university. It is in front of the Daniel Felix Ritchie School for Engineering and Computer Science, which is named after his father. 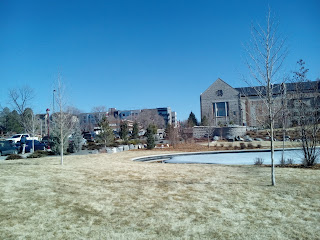 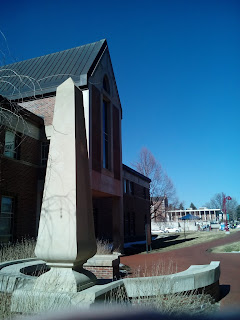 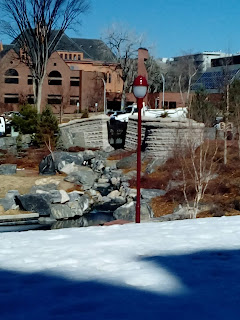 [Dan's Garden and the School for Engineering and Computer Science] 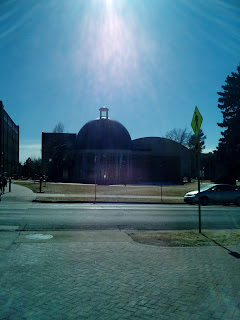 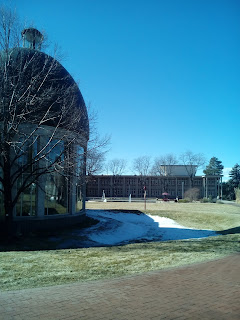 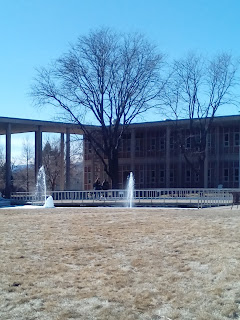 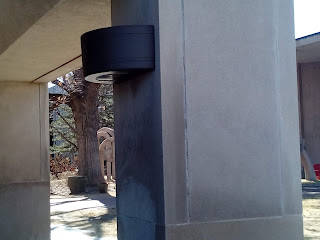 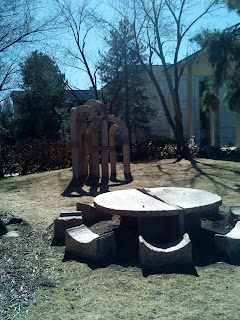 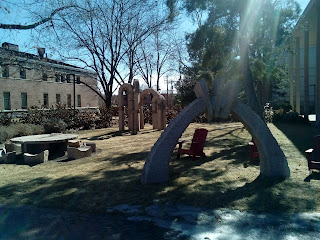 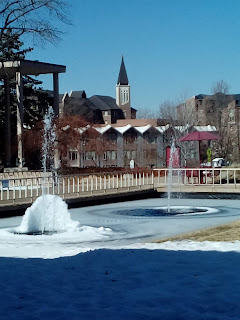 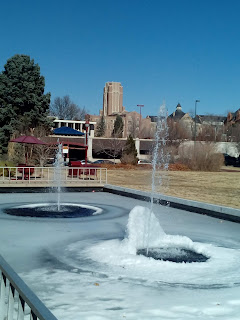 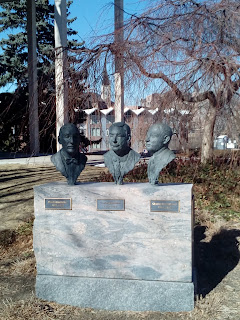 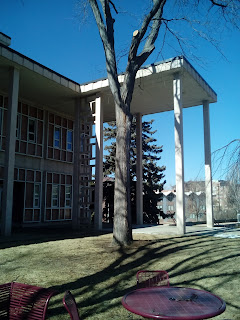 [The Boettcher Buildings and park]

The other building that houses the School of Natural Sciences and Mathematics is the Clarence M. Knudson building. 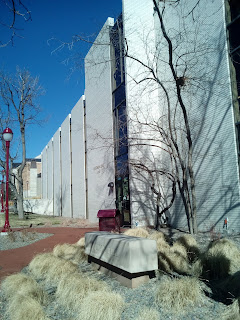 The Robert and Judi Newman Center for the Performing Arts stands to the east. This cyclopean building sports a sundial on the south wall and, not a rose window, but an embossed rose, on the western facade. 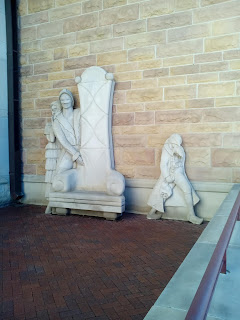 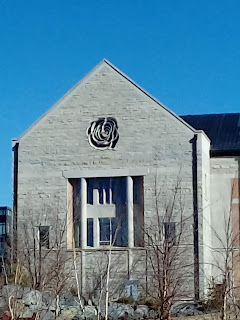 After wandering around this southern strip of the campus, I headed to Knudson Hall and the lecture. It was presented by Florencia Orosz Hunziker of Yale and was entitled "Fusion Rules for L(25,0)".

I enjoyed the lecture and... in truth, I didn't understand a single word she said. Actually, I did understand two words. I knew that there is something called a "tensor" and I understand "isomorphism". It was way above my head, but that was pretty much what I expected.

So, why did I go? First, I wanted to meet the mathematics faculty and, second, I wanted to push myself beyond my boundaries. Although I didn't understand the principles that Ms. Hunziker presented, I found that I could follow her thoughts and I recognized the method that she and her colleagues were using in their research. Afterward, in the reception, i had a brief conversation with her and was gratified when she didn't look at me as though she thought I was an idiot.

Actually, the all the attendees were friendly and very human. The conversations after the lecture were not at all above my head.

And as a bonus, the lecture rang bells.

I've dipped into theoretical mathematics a few times but it tends to be about three graduate courses further than I've been but I recognized a few things. Ms. Hunziker talked about Virasoro algebras. I had never been exposed to Virasoro algebras before but she kept drawing triangles on the board representing three-way isomorphism. Not really enjoying the feeling of ignorance, I looked up the topic at home. I can't say I understood much better but I noticed a recurring connection with particle physics and string theory.

One of the much cherished principles of physics has been supersymmetry, a belief hat there has to be an underlying, unifying pattern in the universe. From what I have gathered, supersymmetry has been rather disappointing. For instance, matching subatomic particles have failed to appear where they were expected. This pattern they that have been searching for seems to be a two- or four-fold pattern - sort of, "everything has a mirror image".

But I remembered reading a book in school by Sir Arthur Eddington, "New Pathways in Science". One of the chapters discussed Dirac's "Theory of Groups" and his idea that the universe is governed by pentads of operators. I don't see much about pentads anymore. It looks like it was one of Dirac's ideas that didn't really catch on. I wonder if the three-way operators are one side of a pentad.

So although I still don't have the foggiest, I did enjoy the seminar.

I've noticed that most progress comes from stretching beyond your limits. My memory has never been great but in memory tasks, I could never move forward until I put down the text and pushed myself to recite. I couldn't use new problem solving techniques until I moved past the examples into the exercises.

I once read a book on differential equations and came away as ignorant as when I started. Then, about a year later, I read the book again and, magically, I understood everything. I say, "magically" because I had done nothing mathematical in the interim. Obviously, my subconscious had been working in the meantime.

In most cities and towns, many of the streets, buildings, and parks are named after people - people that, at least at one time, were important to the history of that place. What are the place names in your area and where do they come from?