Denver has a lot to offer the adventurer - a lot of culture, history, technology, art, food, sports, entertainment...but the first fact about Denver is the capitol. For everyone outside of Denver, Denver is the Capitol of Colorado.

Buses stop all around the Capitol building, so it's not hard for the pedestrian to get there. Coyote and I took the D Line to the 16th street mall and walked south - it's not a long walk and it's easy to enjoy the street life at any time of the day. Not long ago, I attended a town meeting at Civic Center Park and ended up walking up 16th Street Mall after dark. I think, if I wanted to recommend a city to a friend for night life, it would be Denver.

Civic Center Station, the big downtown bus terminal, is at the south end of 16th Street Mall and the capitol is just across Colfax from that - you can't miss it. 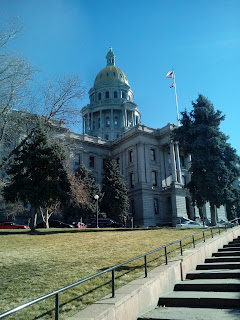 The visually most outstanding characteristics of the building are the sheer size and the gold dome. The original dome was copper, but Denverites rejected the use of copper and pushed for the more natural gold. Only 4 pounds of the stuff is needed to cover the entire 2842 foot square surface. Although the gold is from Colorado, it is sent to Italy to hammer into the thin foil, thinner than a human hair, used to cover the Capitol dome.

Ten other states have gold domes on their Capitols and two others have gold cupolas. Gold is popular. Many of the states just buy their gold. The Denver dome is gilded with gold from Colorado mines.

In fact, most of the materials used to construct the Capitol building are from Colorado. The Yule Marble used in the floors and stairs, from Marble, Colorado, is also the marble of the Lincoln Memorial and Tomb of the Unknown Soldier in Washington, D.C. The rose onyx used for the walls is from near Beulah, Colorado, is unique in the world, and is almost all in the Capitol - so don't go to Beulah to see rose onyx - it's all here. 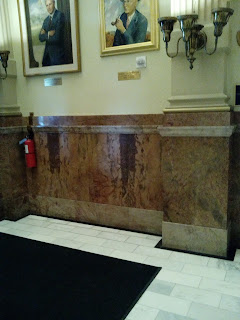 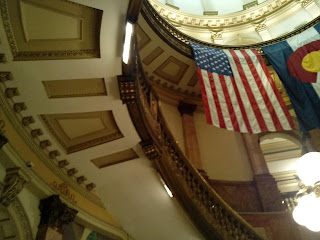 Only the brass (there a four or five people employed in the Capitol just to polish the brass fixtures) and white oak are from other states. The brass is from Cincinnati, Ohio and Louisville, Kentucky, and the oak is from the Ozarks in Arkansas and Missouri.

I couldn't take enough pictures nor could I fit them into a blog. The building is packed with art objects 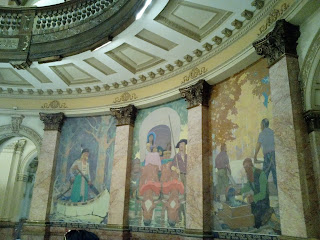 The tour took us up the rotunda (stairs, lots of stairs) to some of the room galleries and balconies and behind the scenes to see the inside workings. The copper dome is still there. Most high peaked domes like the one on the Colorado and U.S. Capitols are more ornamental than stable and overlay an inner spherical dome. 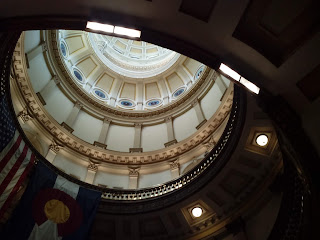 The United States says "government for the people, by the people, and of the people," Colorado enacts it. There is every opportunity for the citizen to be active in Colorado government. When Colorado says, "This is your Capitol," they back it up.

Even the security staff at the Capitol building were friendly, helpful, and professional. The tour guide reminded us several times that, when the tour was finished, we were free to look around all over the building.

The Capitol building houses the headquarters of two of the three branches of Colorado government - the executive and legislative branches. The offices of the Governor, Lieutenant Governor, and Treasurer are on the first floor, and the House of Representative and Senate chambers are on the second floor. There are galleries on the third floor where visitors are welcome to observe legislative proceedings. Videos of proceedings are archived and are available on the Internet at https://www.coloradochannel.net . 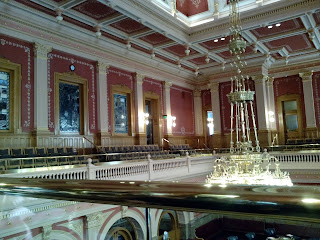 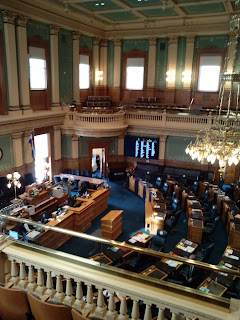 Although much of the Capitol is as it was completed in 1901, as you can see, there have been  modernizations like the electronic call board on the wall of the House.

Stairs - many, many stairs. The Capitol tour takes you all the way up to the outside balcony of the dome, where the views are spectacular. At the west end of Civic Center Park (see the mountains?) is the City and County Government Building. 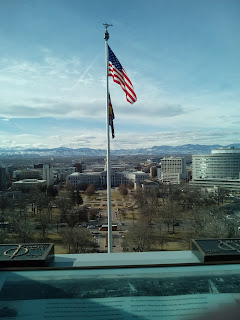 Just across the street to the southwest is the Ralph L. Carr building of which I spoke above. It has roof greenery. 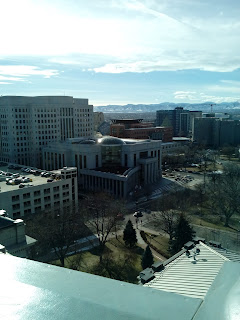 Down the street is the Cathedral Basilica of the Immaculate Conception with it's towering Gothic architecture. 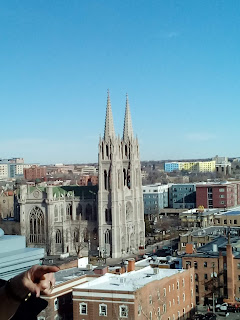 [Cathedral Basilica of the Immaculate Conception]

After the tour, I shot some street views. The sun was in a bad place so many of the pictures were blurred or glarey. I did manage to get the statue around back of the Native American examining a buffalo carcass. It is called "The Closing Era" and it was created by Preston Powers for the 1893 Colombian Exposition in Chicago. The name is, perhaps, a little short sited as Native Americans are reclaiming much of their "lost" cultures and heritage. Maybe the "era" was just closed for some housekeeping. 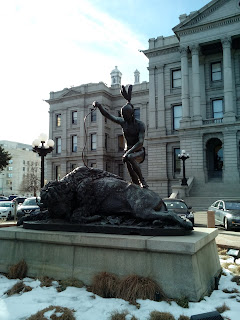 [The Closing Era]
Well, hopefully, if you are a Coloradan, you will take this tour. I've included blogs about Civic Center Park in the past and I'm sure there'll be more to come. The government buildings are scattered for several blocks around Denver and there are many statues and other works of art and history - I can't even begin to cover them all.

I've visited the seats of government in Washington, D.C.; Atlanta, Georgia; and Montgomery, Alabama and have seen many of the other Capitols from some distance. They're all spectacular. Most of them provide tours and you should also check to see how you can sit in on legislative hearings.

What they do in these government buildings affects your life deeply.