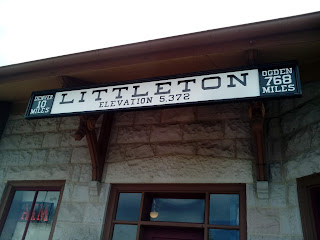 The old depot is still there at the Littleton Station. Ogden Utah is only about 525 miles away now. I guess things didn't shrink - the road just takes a shorter route than the train did. This particular train only goes north to Denver and south to Mineral - things change. But the depot is still there.

There are steles out front. They aren't rock like in ancient Greece and Babylon but they do record historic events - the history of Littleton. Inside is a nice coffee shop with really good bakery items and friendly people. 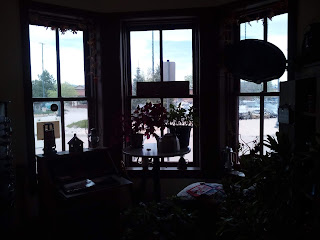 Littleton is now firmly a part of the Denver Metro area. It's where the Littleton Lockheed Martin aerospace plant is and it's where the infamous Columbine shootings took place. Littleton has been in the news a lot.

It reminds me of small town America with it's crowded store fronts. In town, Arapaho College breaks the spell with it's modern buildings.

Denver Seminary was close by and I wanted to stop in for part of another project but it was on the trail and, after finishing there, I joined the Platte River Trail and Mary Carter Greenway that parallels the South Platte River and the CanAm Highway as they transect the Midwest.

This red winged blackbird was determined that I would not take a picture of his brilliant scarlet and yellow stripes. This is a good place to spot birds - both songbirds and water fowl. 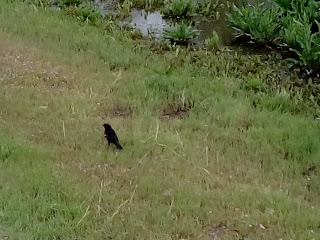 The path is well marked - nobody's gonna get lost here. 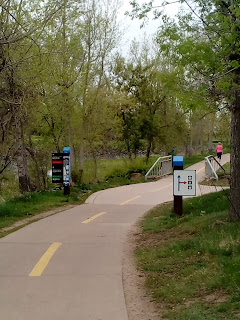 These swallows were constantly in motion. I don't know if I could have gotten a decent picture with a telephoto lens. 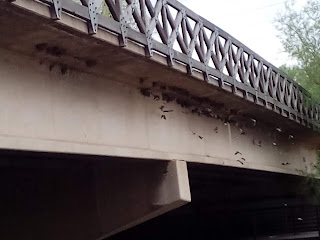 In the Littleton area, the South Platte has grown to a small river. Rivers grow through time and space. This is a much older river than the one that rushes out of the Rockies at Waterton Canyon. It still runs swift but it has slowed considerably. 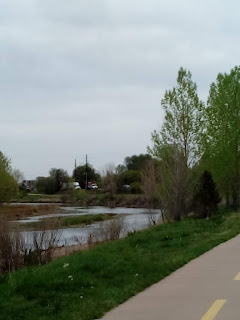 Very few of these trees are original to the area. It's easy to forget that Denver is still a desert city. 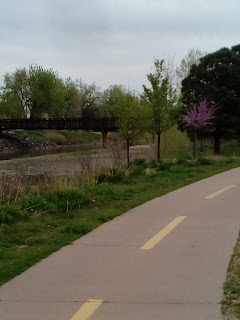 Hudson Gardens is still waking up after a mild winter. I was hoping they'd have all the plants out but, alas, only the tractors are evident.

The wildflowers are certainly awake, though. 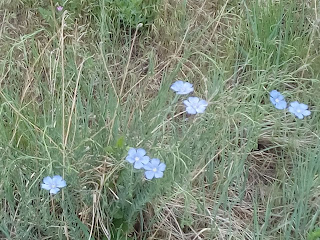 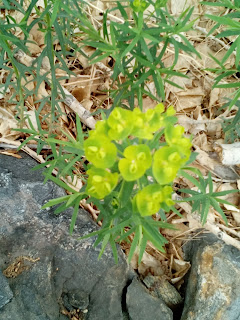 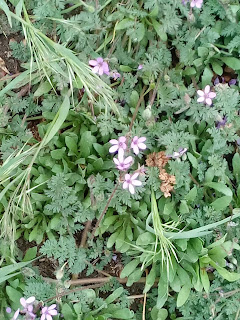 This collection of brass statues memorialize the cowboy. I gotta say that I like equestrian statues out here more than the bombastic megamaniacal Goliaths of Greece and Rome. 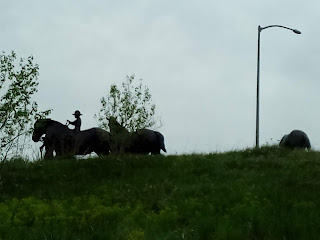 Oxbows are features of meandering streams. Water flows downhill and, as it does, it tends to carve steepsided valleys but, as water pushes at one side and then the other, it broadens it's streambed until there's a wide valley. With a little restriction, it's path becomes serpentine. When a bend in the river turns back on itself and reconnects with the main watercourse, that loop can get pinched off to form a marshy or dry gouge called an "oxbow". Oxbows are a regular feature of the streams in the southern United States but I haven't seen that many here in the West (although both Bear Creek and the South Platte River certainly meander), but there is a nice example of an oxbow between Littleton and Englewood. They tend to be long and sweeping and hard to photograph except, maybe, from the air. 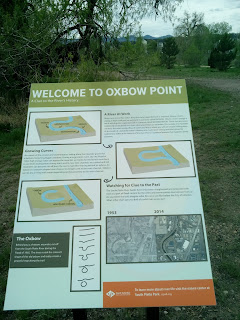 I don't see very many things that might be called a waterfall (by some stretch of the imagination) out here. Even the water features that most people here call "waterfalls" are either cascades or man made. This little cascade on Big Dry Creek where it drops down into the South Platte is, at least, picturesque and is comfortably cool on this hot spring day. The trail crosses Big Dry Creek over a bridge and then crosses the South Platte River via a nice example of a suspension bridge. 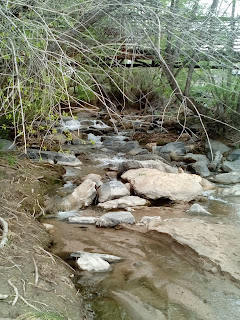 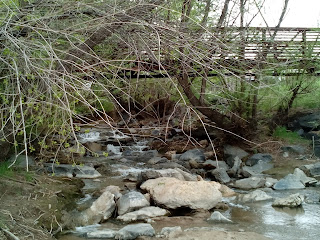 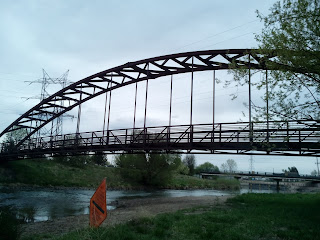 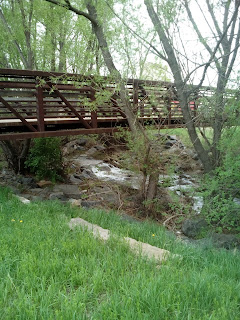 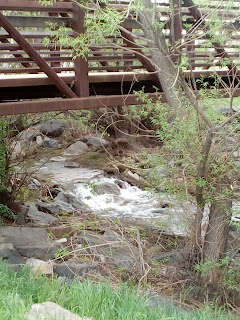 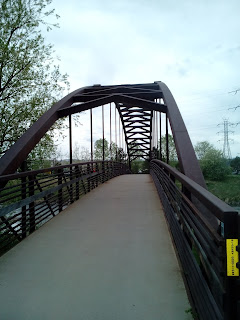 The river is beginning to look like a river here. I could still wade across it but it's broad. 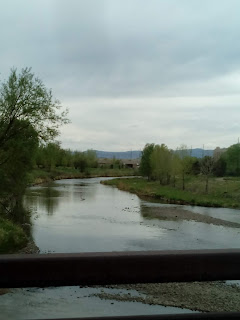 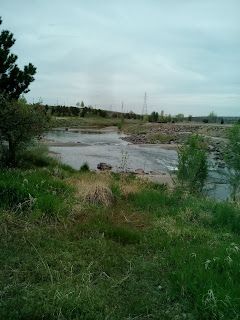 [South Platte from suspension bridge and above]

I've noticed that rivers in America become domesticated, harnessed, controlled as they get older. The Greek philosopher Heraclitus said that you can't step in the same river twice. Of course, the river you stepped in the first time has gone on down river to be civilized and bound. 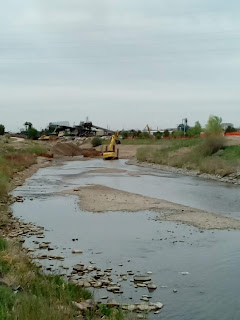 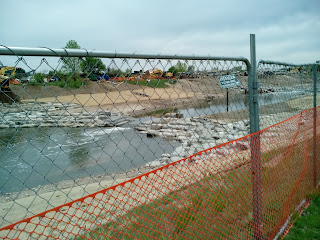 And from the river, I can look up to see my old friend, the bell tower at Colorado Heights. 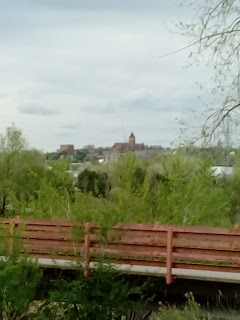 And since this is The Bear Creek Commentaries, I would be remiss  if I did not include the confluence of Bear Creek with the South Platte River. Here, the two form a delta that seems to be a favorite with the water fowl and other wildlife. There is a little overlook park that recommends itself well for bird and wildlife watching. 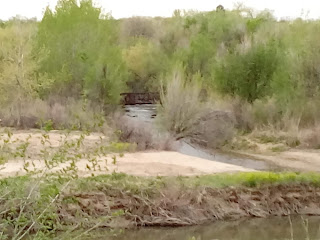 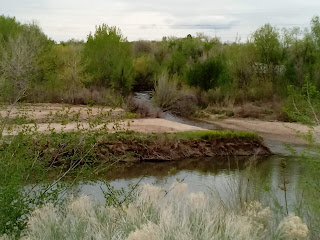 The end of Bear Creek Trail, where it joins the South River Trail/Mary Carter Greenway at River Point Shopping Area is where a historic (and notorious) settlement called Petersburg stood. The marker tells it all (well, some of it, anyway. There are webpages where you can find out the rest.) 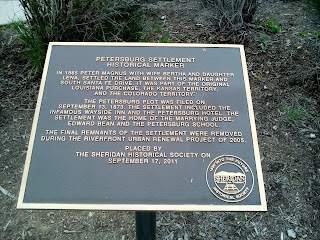 I walked up the hill to see one of my favorite views of the Rockies from Denver. 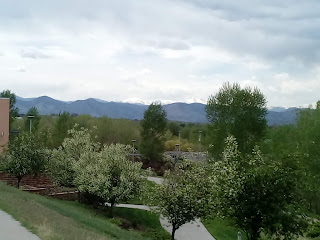 [River Point view of the Rockies]

I ate supper at another of my favorite restaurants in Denver - the Huhot Mongolian Grill. It's an experience where you can build your own stir fry from a bar of components and sauces. They also have a menu (from which I selected a rangoon dessert - crunchy cream cheese filled pastries covered by a fruit sauce and served with a bowl of ice cream.)

Then I continued on to Oxford Light Rail Station, back to Englewood Station, and by bus to home. In keeping with Denver's recent appreciation of outdoor art, most of the light rail stations are decorated by local artists. Oxford features tiles painted by school children representing different modes of travel. Here are a few. 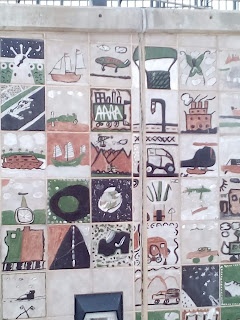 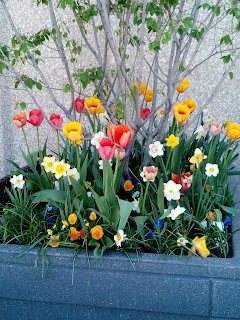 Spring is a time for looking for wildflowers. Many of them are tiny but exquisite and you have to pay attention to find them and look very closely to really see them. You might be surprised at the diversity and complexity.

Rivers on the plains and in the southern United States are great meanderers. See if you can find some aerial photographs of them and you might see an oxbow.

Posted by Wolf VanZandt at 2:30 PM