Actually, the way you design a highline canal is start at the elevation at the beginning and set a course that closely follows the contour of elevation (you know, like the lines on a topographic map) but very, very (very!!) gradually descend from that elevation. The canal follows the "highline". That way, you don't  have to pump the water. Gravity does all the work for you.

There are other canals in the Denver area. Ward canal parallels Bear Creek through Bear Creek Canyon at Morrison.

Denver was built on the high desert so it's understandable that it is concerned with water conservation. Canals are not the only artificial waterways in the area. When Denverites talk about gulches, they mean something a little different from the standard definition. Usually "gulch" is defined as a narrow v-shaped valley with steep walls cut out by a creek or what used to be a creek. The later case would be a "dry gulch". In Denver, gulches are semi-artificial stream beds. Instead of following a contour of elevation, they run straight down the shoulder of valleys to a river. I say "semi-artificial" because the original stream bed might have been diverted by the gulch (as in the case of Bear Creek Gulch, which was modified by the McBrooms to bring water to their homestead), or the stream bed might be widened or lined with concrete to avoid erosion or increase the capacity of the stream. Many of the gulches in Denver play dual purpose. They usually have a trail and a string of parks paralleling them, but primarily they serve to carry runoff water to a natural stream. They are flood control.

Harvard Gulch, East and West are two gulches that Channel water down the South Platte River valley down to the river. I hiked the Harvard Gulch West several times from Harvey Park to Ruby Hill and the river. It's a nice hike.

I followed the Harvard Gulch West today down from University Boulevard to where it disappears underground at Rosedale/Kumming City. Harvard Gulch is named that because it parallels Harvard Avenue on both sides of the South Platte. In this area, most of the streets are named for colleges (as if Denver didn't have enough colleges of their own).  Here are a few photographs. 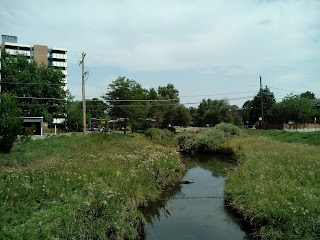 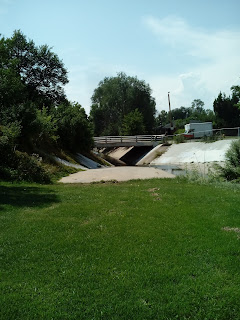 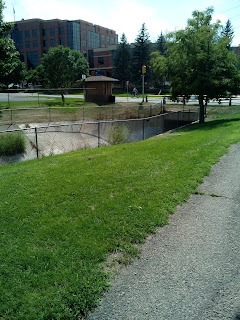 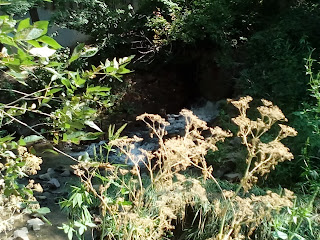 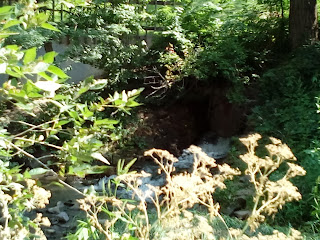 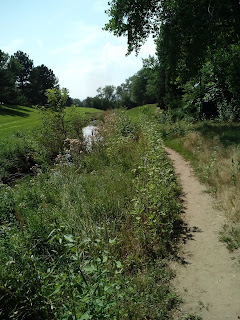 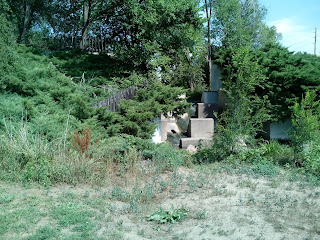 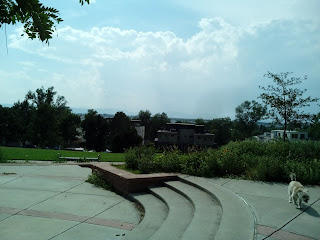 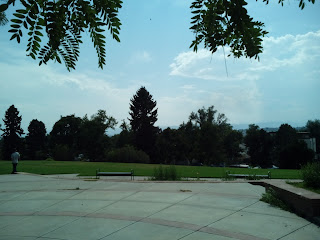 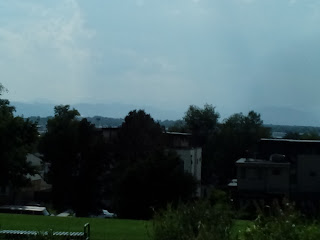 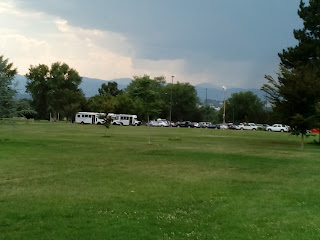 All the water features are Harvard Gulch. Only a few of the pictures look like the regularly defined "gulch" but Harvard Gulch is rather typical for gulches in the Denver area. The last few photographs are from the high hill in Kumming City Park. The last picture is from Harvard Gulch Park. I liked the view of the thunderstorm coming in. I almost didn't get home in time!
Posted by Wolf VanZandt at 7:21 PM