I've been in high winds before. Twice I've almost been blown off the bow of a lay barge in the Gulf of Mexico, and that wasn't even the hurricanes. In southern Alabama, there was both hurricanes and tornadoes. When people think of tornadoes, they usually think of Oklahoma, Kansas, and Nebraska, but Alabama vies for frequency and number of F5 tornadoes.

Some of the fastest winds, barring tornadoes and hurricanes, in the continental United States have been clocked in the Denver area, especially in Boulder, Colorado. For instance, wind speeds of 150 mph were reported in the Boulder area December 4, 1978 (https://www.esrl.noaa.gov/psd/boulder/wind.html). Winds in excess of 90 miles per hour are not that rare.

As winds blow over the Rockies from the west, moisture is stripped out of them and the cold, dry air is heavier than the warmer air of the high plains so that it just rolls off the mountains and roars down over Denver. Where there is a gap in the mountains - Boulder, Bear Creek, Turkey Creek, Waterton Canyon, the winds are compressed and funneled into the valleys extending into the plains. That's where the highest winds are.

And I live on the side of Bear Creek Valley, so when I started out to see a little Buddhist temple just off Estes Street, I was fighting a ferocious headwind. I didn't have an anemometer on me, but from the feeling of wind around a moving vehicle, I would say that it was between 30 and 40 miles per hour. It was warm, in the 50s, but sweat had no time to collect on me. When you come from a place where you don't often have to fight the wind it's surprising how much effort you have to put out to walk into the wind.

It was a nice walk, though. I'll post some pictures of the temple later when I put up an article on Buddhism in Denver.

A beaver dam that I noticed earlier in the year has been modified so that flooding won't wash it away. 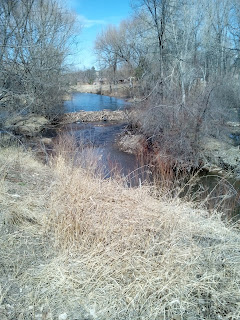 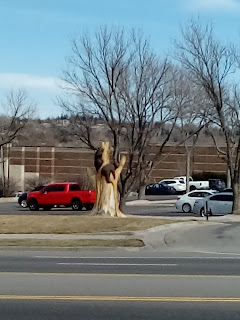 Why are the climbing the tree? The tree sculpture across the road has the answer. 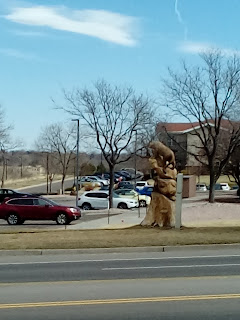 Posted by Wolf VanZandt at 5:02 PM