Optical illusions abound in nature. Have you ever been walking along on a sidewalk and seen a crack or bump in the pavement ahead only to find, when you get there, that it's only a very sharp, dark shadow? There is actually a kind of brain damage that can cause a person to regularly mistake shadows for solid things, but occasionally others can be fooled by this illusion. How about the animal carcass that turns out to be a shopping bag? The brain prepares you to see what it thinks you need to see. In other words, you see what you expect to see. Usually, it's pretty accurate - accurate enough, anyway.

Here's a picture of the Front Range of the Rockies from a nearby shopping center. The mountain in front is Mount Falcon. It's summit is 7,838 feet above sea level and it's prominence (height from visible base to the summit) is 1,812 feet. How tall is the snow covered mountain behind it? 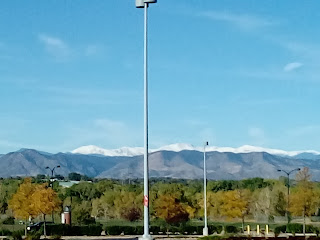 Here's a hint. Mount Falcon is only 10 miles from the point the photo was taken. The snow capped mountain is 30 miles away.

Okay, the trick is that the mountain in back looks smaller because it's further away and the earth's curvature hides some of the altitude. The mountain in back is Mount Evans, third highest mountain in Colorado's Front Range (only bested by Pike's Peak and Colorado's highest Mountain, Mount Elbert). Mount Evans is 14,265 feet tall with a prominence of 2,753 feet. It's almost 1000 feet again as tall as Mount Falcon.
Posted by Wolf VanZandt at 1:47 AM