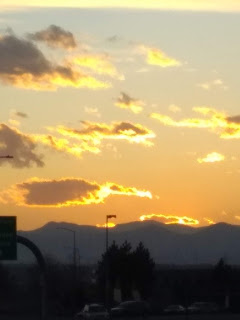 [Sunset over the Rockies]


Last week, we moved to a new neighborhood. This week I am exploring the area. True to form, Colorado is providing diversity. 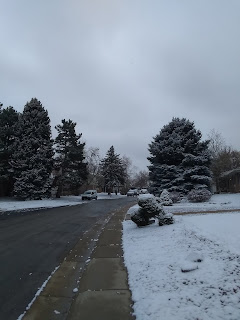 
Monday, it snowed while I explored the Southeastern corner of the Walnut Hill neighborhood. The area is nearly square, bordered by four busy streets, Quebec to the west, Arapahoe to the north, Yosemite to the east, and Dry Creek to the south. Our place is close to the center of this maze of streets and this first excursion let me find a short route out to Dry Creek Road. 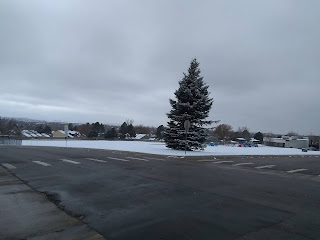 
Although the interior of Walnut Hill is hilly urban forest, the perimeter offers some broad vistas of the plains to the south and east, and the mountains to the west. The snow on Monday obscured most of that. On a clear day, you can see mesas between Denver and Colorado Springs and the solitary profile of Pike's Peak in the distance.


Most of Dry Creek Road is lined by walls on both sides in this area. Although the south side borders Willow Creek, a covenant neighborhood, Walnut Hill isn't a gated community, so I assume the walls are more to keep out street noises than to keep out intruders. The people here seem to be friendly and welcoming. There is a variety judging by the diversity of banners flying in the yards. 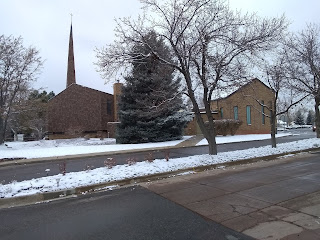 
Churches display a wide variety of architectural styles. Over 40 years old (according to the website), Good Shepherd is a fairly recent addition to the diocese and the building reflects it with it's rough, shingle and brick facade and vertical lines. The congregation is outgoing and friendly.. 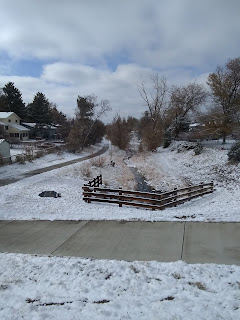 
This strip of greenway is a convenient east-west connector through the neighborhood, bypassing most of the traffic between Yosemite and Quebec. Little Dry Creek and the adjacent trail runs through it, providing me with an easy route to Yosemite, the Denver Tech Center, Arapahoe Lightrail Station, and Arapahoe Marketplace shopping center with it's bus stops. One bus runs straight west to the shops and government centers in Littleton. 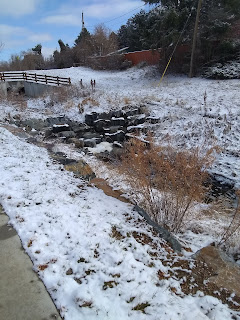 
Little Dry Creek is lined in several places with rock and there are several of these rock cascades along its course. They look better than the natural clay that blankets the Denver area and the sound of water running through rock is nice, but the primary purpose is erosion control. The clay is tough (try using a shovel on it) but soft and erodes easily...rock less so.


As water flows downhill, it expends  energy by digging into the creek bed. An obvious character of this neighborhood is it's gradient from east to west. The creek is burning off a lot of energy here. The rock cascades are placed in areas of greater slope so the creek can drop energy on granite instead of clay. 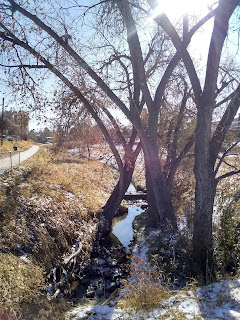 
This is Colorado in the fall. We're right where the North American jet stream whips around like a hooked earthworm and it draws down brutally cold air from Canada one day and warm Pacific air from the west the next.


Weather is known to be a chaotic process, impossible to predict past a certain horizon. In South Alabama, where I lived before moving to Colorado, meteorologists could do quite well a week or so in advance. They do well to make accurate forecasts a day in advance here. Alabama's secret is that they watch us. We're where their weather comes from. 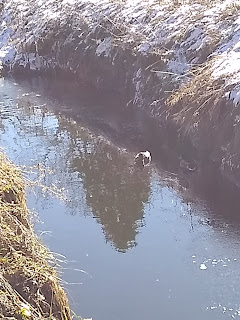 
Of course, the ubiquitous ducks use all the waterways in this area. Lots of waterfowl do.


We used to be on some major migration routes for birds moving between Canada and points south but, as climates have shifted to warmer temperatures, many of the birds have decided that Colorado is a pretty nice place to just stay year round. 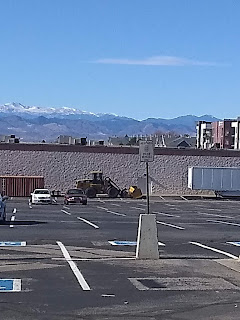 [The Rockies from Arapahoe]


The east-west streets in this area, like Arapahoe and Dry Creek Road, provide some pretty impressive views of the mountains. The parking lots at Arapahoe Marketplace are at a considerable elevation over the South Platte River Valley and provide some particularly nice views of Mount Evans and the mountains around it.


Just the elevation between Quebec and Yosemite here is around 75 feet (that's my elevation gain when I'm packing groceries from the grocery store to home). At home, I'm 440 feet above the river according to the National Map on the United States Geological Survey website, https://viewer.nationalmap.gov/advanced-viewer


A walk around the northeast corner of the neighborhood provides a good grasp of it's topography. 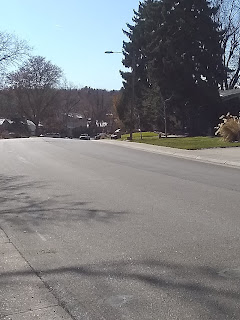 
The view down Uinta Street makes it quite obvious that Walnut Hill is the steep side of the valley cut by Little Dry Creek. The broad contours are the result of millennia of rare floods. The steeper gouge that the creek flows through is the result of constant scouring through the soft, sticky clay.


The clay that covers the area is the residue of weathered volcanic ash. Although there isn't much volcanic activity in the area now, There most certainly has been in the distant past (not so distant in geological terms). The two Table Mountains in Golden, ancient volcanoes, make that abundantly clear. The uplift caused by the Pacific Plate slamming into the western edge of North America, the origin of the Rocky Mountains, was a dramatic event. What we see today, the cragginess, has a lot to do with erosion by runoff, wind, and glaciers moving through the area.


But Little Dry Creek has done an impressive amount of work over the years. The elevation profile of Walnut Hill Trail gives a good idea of the drop in elevation…141 feet from Yosemite east of Walnut Hill neighborhood to Quebec at the west border. The trail has grades of up to 16. Trail grades, like most slopes are measured as rise-over-run, so that would be a slope of 16 feet up for a foot along the trail.

This profile was recorded using the AllTrails app. Elevation measures using GPS can be as much as 47 feet off in this area but comparisons with other sources like Google Earth indicate better accuracy. This profile might be around 20 feet off.


A south-to-north profile along Spruce Street gives an idea of the shape of the valley.

The profile isn't a straight slope down to the creek, water on the Earth's surface doesn't flow straight and, consequently, over time, the course of a stream changes and the surfaces carved into the ground are complex. Also, notice on the map that my path wasn't straight. Spruce Street is interrupted as it runs through the Walnut Hill neighborhood.


When I returned home, this flicker was waiting for me in my backyard. 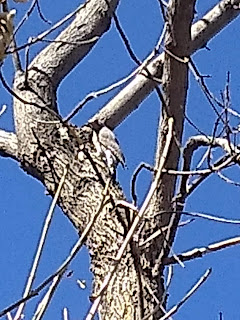 
Flickers are related to woodpeckers and sapsuckers. We have an abundance of all these in Colorado. Thanks to my birdwatcher friend for identifying this one.


These explorations happened in the space of a week and I help out in the Christ Church Episcopal Library on Wednesdays, which gave me an interlude. I took a train back to the old neighborhood. That gave me the opportunity to look around Village Center. The Lightrail Station features a long suspended walkway over Interstate 25. I'll have to revisit that when I write a blog on bridges. This one combines a walkway suspended by cables suspended by an arch. 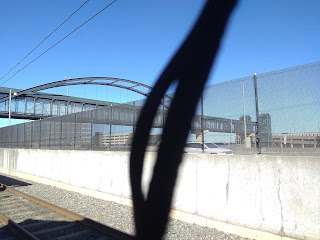 
I also checked out Tower 1 at Village Center, the twenty-two story building that can be seen from all the neighboring areas. The person at the information desk was informative. He explained that the tower was an office building built in 1987. The entire top floor is occupied by a law firm, so there's no public Access, but the view from the ground is nice. 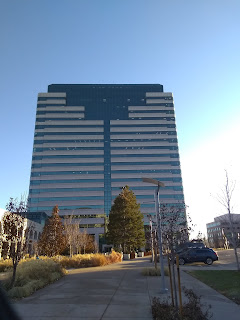 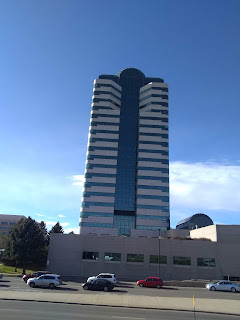 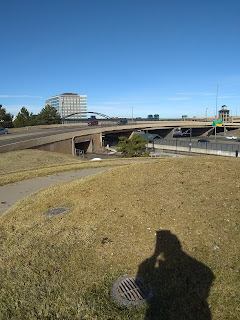 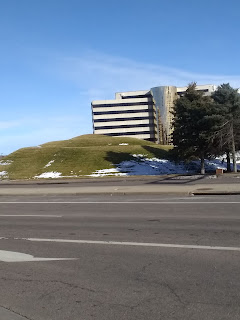 
Two of the three highest peaks in the Front Range of the Rocky Mountains, Mount Evans and Pike's Peak, are visible from this area. The highest, Mount Elbert, is also the highest in Colorado, but it's a little too far west to be seen from here. 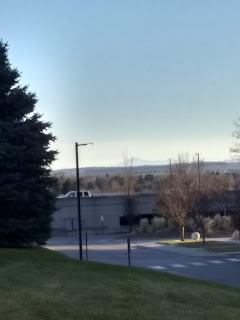 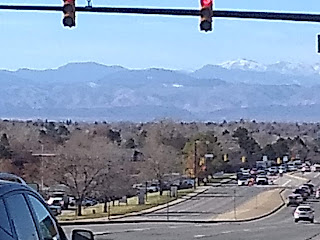 
We also have our share of raptors. This young hawk scrutinize me from his perch in the western part of Walnut Hill Park. 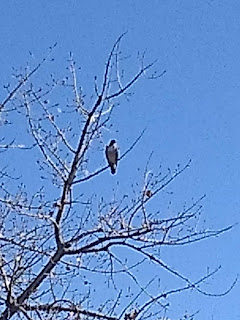 
I frequently stop in at the Mini Moo Tea Shop in the shops along Arapahoe. They let me take a picture of their "dog". 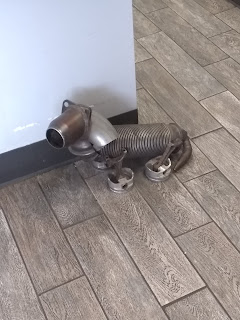 
Dry Creek Road, at the southwest corner of Walnut Hill, has some spectacular views of the Front Range. 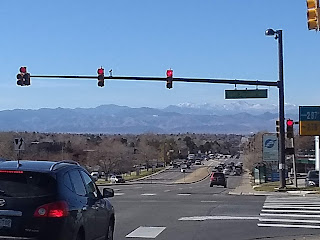 
The snow capped peak to the right is Mount Evans.


I extended my walk in the southwest corner of the neighborhood along Quebec at the western border of the next neighborhood - Willow Creek. It resembles Walnut Hill in that the main topography is a creek valley. 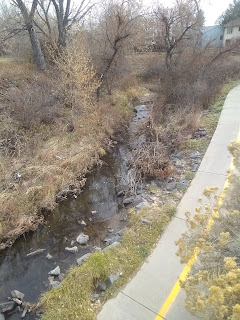 
On my last excursion, I noticed that Walnut Hill Elementary School has added an "A" to their curriculum. "STEM" is now "STEAM". "STEM" stands for "science, technology, engineering, and mathematics". STEAM adds "arts". There is a move to change it to STREAM and add "Reading and wRiting". It looks like we're back to the three Rs. 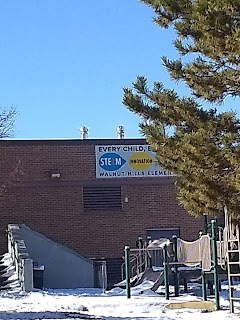 Your neighborhood is an adventure. Explore it.

Posted by Wolf VanZandt at 2:49 PM