I'm not a physicist, but I will be impersonating one on this blog for the next year or two  Actually, I love science demonstrations and have since I was a kid with my science kits.


Why is physics fundamental and in what way?


Well let's think about the prairie dogs out in the Bear Creek Greenway. They would be (and are currently) of interest to biologists. But, being animals, they have to eat to survive and they get most of their energy from carbohydrates, much like humans. The processes they use to extract that energy has to do with the interactions between molecules and atoms. Now, we're in the realm of chemistry, but the interactions between chemical substances care governed by charges, so, now we're solidly in the realm of physics.


The furry little things move around (a lot!) and their bones and muscles work by the same principles as any other machines - again, physics.


The Table Mountains in Golden are geologically interesting remnants of ancient volcanoes. They have deposits of basalt to prove it. Basalt is like granite but hardened so quickly that  large crystals could not form. The way substances change phase are physical phenomenon, and the processes that uncovered those ancient volcanoes are also physical forces.


The point is that all the sciences, at some level become the purview of physics. The ways we measure things are governed by physical processes. If you pour a liquid into a graduated cylinder, you will see that the surface is curved and accurate measurement requires that you take that curvature into consideration. The forces that curve the surface of the liquid are physical. The smartphone I use to measure things on the trail and make photographs relies on electronics to function.


Physics is at the bottom of all the sciences.


There are several "flavors" of physics that have developed over the years. The more intuitive, everyday version is Newtonian mechanics. Most folks have a pretty good grasp of the regular push and pull of things although some of the details may be surprising, but Newton died with a serious question on his mind. He knew how gravity worked, but he didn't know what it was, and his idea that light was particles was not completely right. By the time James Clerk Maxwell came along, it was well established that light had a wave nature and he gathered all the parts of electromagnetic theory together.


A lot of people think that Einstein's theories of relativity replaced classical physics, the combined physics of Newton and Maxwell, but again, that's not quite true, in fact, Einstein started with the proposition that classical physics had to be true for every observer in every (inertial) frame of reference. From this seemingly innocent proposition, things began to get weird. As an object gets faster, both its size and time contracts (time runs differently for objects moving at different speeds), and the speed of light in a vacuum is the upper limit of speed in our Universe. But the theories of relativity have been soundly verified.


During Einstein's life, physicists came to the surprising conclusion that in the subatomic world, things did not move smoothly but in discrete steps, things could jump from one place to another without existing anywhere between, and we could not simultaneously know the position and velocity of an electron. Some things are, in fact, indeterminate.  The atomic world was weirder than we had ever imagined. Quantum physics shocked everyone, including Einstein.


So what does the future hold? It seems to be deeper down the rabbit hole. The future of physics is sure to be an adventure.


But, for awhile, let's go back to the comfortable world of Newton and explore how our everyday physics works and, yes, it still works.


Classical physics starts with observation and that means measurements. If you've been following my blog, you've seen me measure trail distances and altitude, barometric pressure, weight vs. mass, and temperature vs. heat. The thing is... there's only three fundamental measurements…..three things you can measure directly. For instance, you measure temperature either by measuring the change in length of a substance that changes size when they heat up or cool down, or you can measure voltage differences across a material which changes its resistance in relation to its temperature. Temperature is the average internal energy in a mass and you would have to measure the energy of all the particles in the mass to measure the temperature and, even if you could go that route, the unit of energy is a joule which is the force of one newton acting through a distance of one meter. A newton is the force of one gram accelerated at one meter per second, per second. In other words, temperature and energy are composite measurements, measurements made up of other measurements.


The three fundamental measurements that make up all the others are position, time, and amount (count). That's all. Distance is the difference between two positions and time duration is the difference between two times. I'll be talking about mass later. It's actually an amount, but all three of the fundamental measurements are weirder than you might think.


In the meantime, check out my creations.


I use constructions from construction kits as structures for demonstrations and experiments. I have an Erector set and a Lego set and I order separate parts as I need them. Here are two contraptions I built. 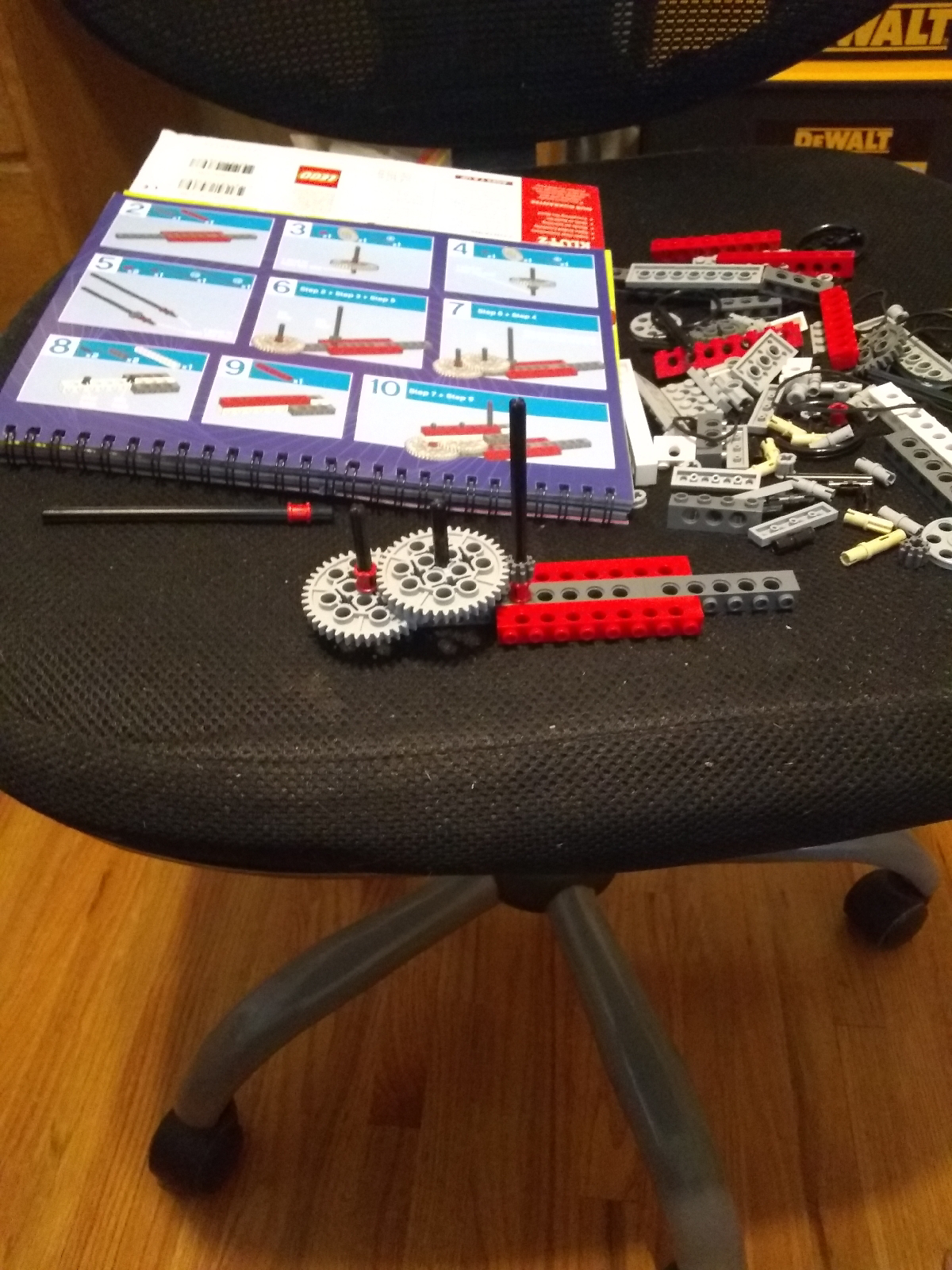 
Every.mechanical clock has one. Clocks are driven by motors, mechanical or electric, which are usually continuous. The old grandfather clock had a weight that slowly unwound a chain on a spool. Later clocks and watches used a wound spring. The problem with both was that they moved smoothly. Clocks have to tock, chopping time up into seconds, minutes, and hours. That is the job of the escapement mechanism. In old clocks, that was usually driven by a pendulum, which can be a very precise time keeper (I'll be looking at pendulums later). Later, escapements used a rebound effect to keep going.


This one uses a swinging weight that slaps a post to interrupt the motion...not very useful for clocks but very visual. The gear train shown above scales down the speed of the unwinding rubber band and transfers the motion to the swinging weight. Watch it go!


I also built a cart out of my Erector set. I'll be using it later when I explore motion in the playground. It has a phone clamp that lets me send my smartphone along for a ride and the Science Journal app can record the trip. 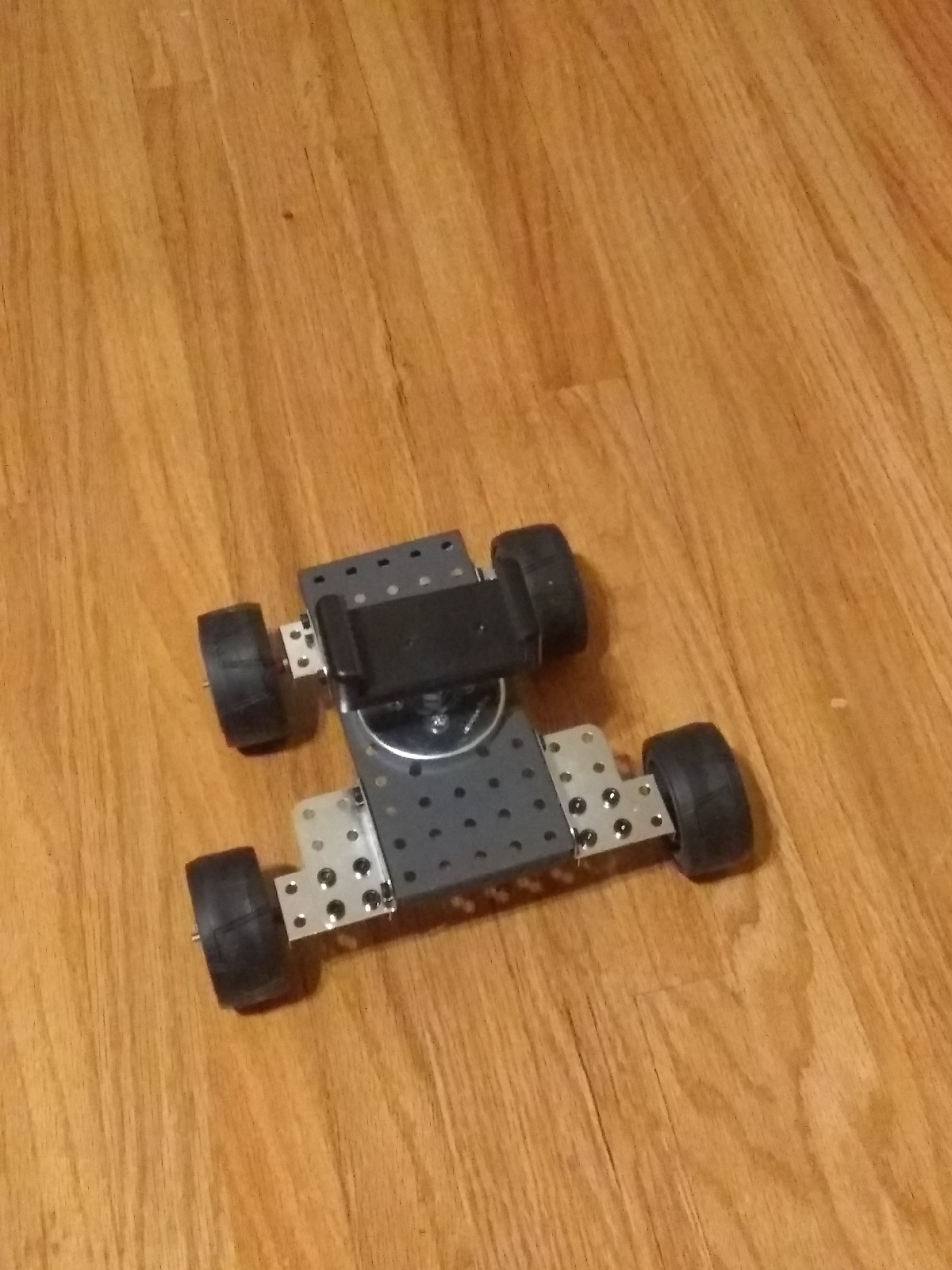 
The thing about construction kits is that their parts are standardized. All the holes and interlocking dots are the same distance apart. All the parts fit all the other parts. In fact, Lego makes their specifications available to other companies, like Klutz, so there is a wealth of parts out there to do just about whatever you want.


By the way, keep workshop pegboards and circuit plugboards in mind, too. They usually fit into this standardization philosophy. If one system doesn't fit another, a little finagling will usually do the trick. A few holes drilled in some Lego bricks will nicely connect Erector to Lego. (Hint: use washers when using screws in soft plastic parts.) Back a circuit plugboard with Lego bricks using double sided tape and your electronic project integrates into your Lego set.


Check out some construction kits. In addition to science adventures, they make great, creative hobbies. Many regions even have clubs for construction enthusiasts, especially Legos.