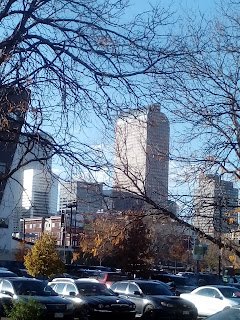 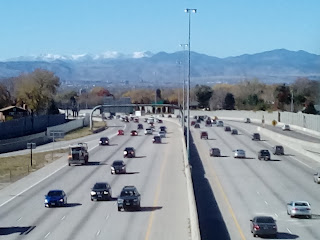 Well, not very spooky after all....

Since my 40s, far fewer "spooky" things happen around me. For the entire twenty years in one of the most haunted cities in the United States, I experienced one haunting and saw one dragon. During that time, one of my camp outs was crashed by a vampiric entity and I didn't even have direct contact with that (I was off hiking at the time.) No possessions. No portals. Not that I'm complaining.

I'm not so convinced that all the haunting in Denver (there are even companies here that capitalize off haunted tours) have any more substance than imagination. There is certainly the potential.

The local "boot hill" was turned into a development and one of the cities most popular parks, Cheesman Park, without the developer bothering to remove the bodies. Have you ever seen the movie Poltergeist?

Molly Brown ("The Unsinkable") supposedly haunts Brown Palace in downtown Denver. Molly Brown spent her life, by all reports that I've seen, busy helping others. I can't imagine why she would want to hang around an old building. According to the Wikipedia article, she only stayed in the hotel for one week after surviving the sinking of the Titanic. The best I can tell, Henry C. Brown, the original owner of the Brown Palace, was not directly related to Margaret Brown or her husband.

I've been to the Brown Palace. Some friends gathered at the ground floor cigar bar, Churchill's, for a birthday party. It struck me as the kind of British "gentleman's club" often seen in movies. But, of course, being a modern attraction, it gets noisier at times. The "flatiron", triangular building with it's brown sandstone and cement exterior and the storefront bar with it's dark, wooden interior (the decor is quite whether the clientele is or not) is very attractive. I didn't notice anything "weird in the neighborhood", though.

I took a walking tour on October 20 to see a few of the "weird sites" in Denver.

First, I took a bus down Yale avenue to Wadsworth where the Brown's summer home, Avoca Lodge, now stands. It's a beautiful brick home that is popular for family gatherings and public functions. Use requires an appointment but anyone can look around the grounds during civilized hours.

Not having admittance to the museum didn't bother me. I'm not studying history or architecture right now - I'm looking for weird - and I had a willing caretaker who was cleaning up the yard. He said that he was not aware of any weirdness associated with the building or grounds. On the other hand, he was friendly and a good conversationalist. 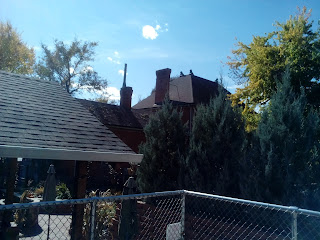 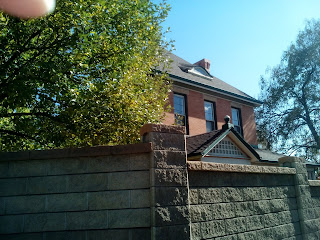 If you do a Google Maps search for cemeteries in Denver, you will be able to draw a rough curve from Denver Pet Cemetery and Crematorium near the Rocky Mountain Arsenal back west to Olinger Crown Hill Mortuary and Cemetery and Mount Olivet Cemetery in Arvada. The arc sweeps down and through the center of Denver where the old "boot hill" rests (that's what the caretaker at the Brown House called it. We call it something different today). With much difficulty, I can find references to Denver's "deadline" on the Internet. One is a book "The Haunted Heart of Denver" by Kevin Pharris. But there are a lot of Denverites that will gladly talk to you about it.

As in all the westerns you ever saw, "boothill" was on a rise at the edge of town. Denver's boothill was no different. Then other cemeteries popped up (or down?) around the edge of town following an invisible boundary as the town grew. Then Denver grew over the deadline. Some of the graves were relocated but some of them.....some of them were not. They're still there.

I took a bus from Yale, up Wadsworth, to 26th street and the Olinger Crown Hill Cemetery and Mortuary. It was a gated cemetery but the elderly man in the guard shack at the entrance was friendly and informative and said that the cemetery welcomed visitors, so I started the mile long trek through the graves.

The cyclopean mausoleum at the back of Olinger Crown Hill Cemetery and Mortuary gives some the willies. The Tower of Memory is just so huge. For me, the cemetery is a big plot of land, well maintained, beautiful and peaceful. The Tower is currently being rejuvenated and is surrounded by scaffolding but it is a rather spectacular piece of architecture. 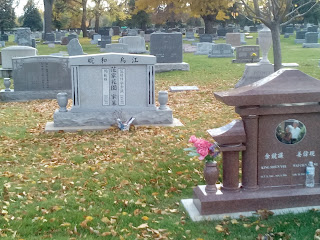 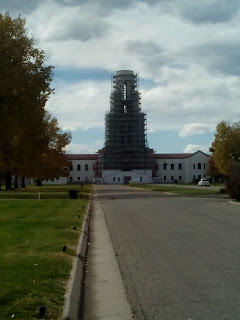 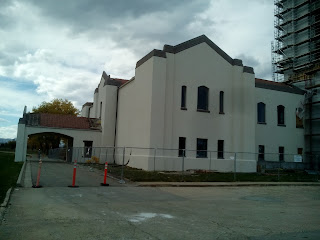 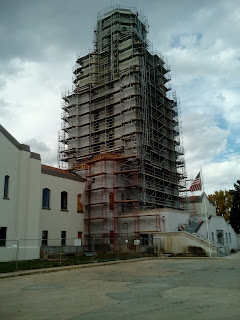 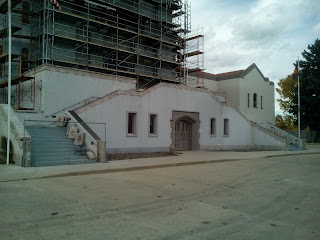 Olinger Cemetery and the Tower of Memory

From Olinger, I walked down to Colfax Avenue and caught a couple of buses to Franklin Street. From there I walked south to Cheesman Park. It was populated by happy, active people enjoying one of the last moderate days in the year. People were laying on the great lawn, picnicking, jogging, walking their dogs - everyone was happy except maybe the homeless fellow sleeping in the gazebo.

As I stepped onto the lawn and made my way around a clump of trees, I almost stepped into a rectangular depression in the earth.

Did I mention Denver's original boothill? This was it, first called Mount Prospect Cemetery. If anyplace in Denver has any right to be haunted, this is the place. An undertaking company was hired in 1893 to move the crowded graves there to Riverside Cemetery so the plot could be used as a city park. Riverside Cemetery is still extant and one of the graveyards of the deadline. The coffins supplied were 1' x 3' pine boxes and, by all reports, it was a scene of gruesome carnage with body parts strewing the area. The workers looted the graves and there are still, evidently, hundreds of graves that were not moved. 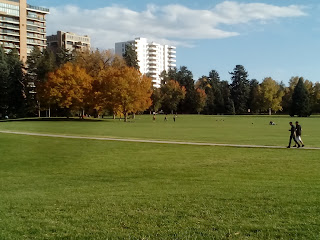 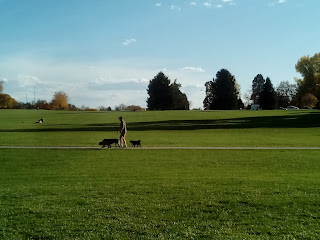 There are, of course, tales of hauntings there and in the area. I personally didn't notice any weirdness (except, maybe, sunken graves to trip over) and the other folks seemed unperturbed that they were "dancing on graves". Maybe the haunts have burned out - or I have.

In short, I haven't noticed any ghosts in Denver. There is a thriving industry of paranormal tourism here and I wouldn't want to dissuade that. It's, after all, what tourism is supposed to be - fun.

What I have noticed is portals. The area around Denver seems to be spatial Swiss cheese. I've heard tales from associates of sections of town that disappear and reappear and sections they drive into that just plain shouldn't exist in a sane universe. My own experience convinced me.

I don't generally walk a mile in 15 minutes. I can, but my walking speed is usually 3 miles an hour max. After an endurance hike that speed diminishes to less than 2 miles an hour.

I had walked from my first residence in the Denver area, in Broomfield, to Flatirons Junction, over the Coalton trail and back, and was walking along Interlocken, a street I had driven along several times. I checked my watch and then noticed how far I had come along the Rocky Mountain Metropolitan Airport. I looked at my watch to see that I had been walking 15 minutes. It would have taken me 45 minutes to walk to where I was. It was aggravating.

I had walked all day. My hike would have been two hours shorter if I had not had to walk through Arvada to get home.

No ghosts. Just a hole in space.

The real horrors in Denver seem to be the same ones that plague mankind everywhere. Other people. In 1999, the decapitated bodies of two homeless men were found. Since the targets seemed to be homeless people, there might have been others that just were not found. One person that was not found was the murderer.

Posted by Wolf VanZandt at 4:11 PM