As an exercise in peoplewatching, I planned to sign up for one of the Denver Museum of Nature and Science birding field trips, but I waited until too late in the season. That's okay, though. I've run into many birdwatchers in this area on the trail.

You really can't miss them. Birdwatchers are interesting people. In the first place, they're passionate about their hobby and they don't mind telling you all about what they're doing and I can't imagine anyone minding.
A couple of years ago, in the spring, I was in the city park in Morrison, Colorado when the only other person there, an elderly lady with a wonderful accent (I think it was German) asked if I was a birder. I said that I was a lifelong learner and that I watched birds sometimes, but I wasn't really a birder. Then she asked if I was looking for water ouzels and, when I said that I didn't know what a water ouzel was, she told me all about them.

The water ouzel, also called the American Dipper, is a pretty little, gray water fowl that looks like a song bird. It likes swollen mountain streams because it likes to perch on rocks in the stream where it's safe from predators. Then, when it gets ready to eat, it jumps in the fast water and walks along the bottom of the creek to eat the water insects there.

There were no water ouzels in Bear Creek at the time, but I made it a point to go back on Mother's Day, when the lady told me they are always there and I did spot one under the C470 overpass. Birdwatchers' enthusiasm is infectious.

This is the only unblurred picture I managed to get of the ouzel - they....flit. 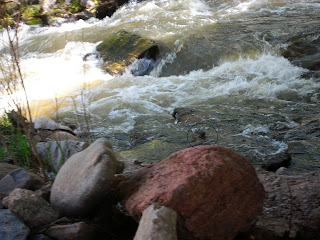 Ouzel (in the circle)

Birdwatchers can often be identified by their equipment. They will almost always have binoculars, possibly a camera and it will usually be pointed at something you can't see. Like many Weres, I have a predator's vision and, if something isn't moving, I have a hard time seeing it. I have a horrible time tracking down canned milk in a grocery store because it might be anywhere and I can be looking straight at it and not see it.

I was on the Stone House trail, which parallels the Bear Creel Trail near Wadsworth Boulevard and I saw an elderly lady (despite Doonsberry and other sources, not all birdwatchers are elderly) circling a cottonwood tree with binoculars pointing upward. She collared me and asked, "Do you see the owls?"

I strained my eyes but couldn't.

She pointed excitedly and directed my gaze to a crook in the tree's branches and then I saw the tiny birds. She was almost as excited for me as she was about herself spotting the owls.

Birdwatchers may travel in groups. The Denver Museum's bird watching filed trips are a case in point.

Last year, near Fox Hollow Golf Course on Bear Creek Trail, I ran into a party of three birdwatchers - a man and two women, who were taking  part in a competition to record the most different bird species. They were resting on a park bench but, unlike most joggers and bikers, were more than happy to explain what they were doing.

In brief, birdwatcherwatching can be an interesting and fulfilling hobby. You can even learn about birds as a bonus!

Posted by Wolf VanZandt at 3:07 PM